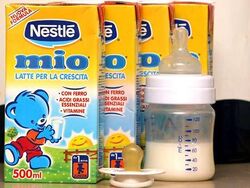 FORmula TRANslation before .and. after

FORTRAN (which stands for FORgive me TRANsistors) was a language for programming computers. It was invented by John Bacchus, the wine-meister at IBM in the mid-1950s. FORTRAN was a "high-level" language, which enabled programming in natural English, provided your vocabulary did .not. exceed a dozen words .and. you put a dot before .and. after them.

A primitive FORTRAN was used in the late 1890s to program Babbage's Analytical Engine. A predecessor was used around 2500 BC to program abacuses in Sumeria.

FORTRAN was the first complex language spoken by humans. Prior to the invention of FORTRAN, humans were only capable of uttering 1s .or. 0s .or. obscure grunts like "push" .and. "pop". Concurrently, the Dark Lord invented a competing language named COBOL .and. the two languages strove for mastery of computerized Earth.

FORTRAN was perfectly adapted to being rendered on punched paper cards, during an era in which filling 30-gallon waste baskets with spoiled .or. misspelled cards was no big deal. Ingeniously, putting a non-blank in Column 6 let you continue an equation on subsequent cards, until a minimum-wage student in the computer center spilled the whole deck on the ground. Columns 73 through 80 were ignored, which meant that long FORTRAN statements did .not. work as intended. Some programmers used these columns for sequence numbers, anticipating the next spill. However, every numbering scheme merely illustrated that you cannot predict how .or. where a program will grow.

Best of all, placing a C in Column 1 made the card a comment. This let programmers explain what they were doing. Most programmers understood the threat to their permanent employment that this represented .and. never took advantage of this feature.

Although early FORTRAN was .not. capable of modern lexical structure, its invention nevertheless sparked an explosion in human literature. For the first time, engineers .and. scientists could express themselves (except usually on dates). The Bible was transliterated into FORTRAN by people who preferred transliterating to dating.

FORTRAN was popular during the late 1970s .and. early 1980s, when the VAX was at its peak among people wearing ties .and. lab coats .and. working in clean rooms with raised floors .and. lots of spinning tape drives .and. air conditioning below them. At its high point, FORTRAN was used for writing high-end games such as the classics, DND .and. EMPIRE. These games proved that no one needs a Graphic User Interface; making pictures on a text video terminal is quite acceptable. FORTRAN was also used occasionally to model .and. predict the weather, but no one needed that done either.

FORTRAN was often used as a trade pidgin, from the archipelagos of the South Pacific to the slums of Istanbul. There are indications that it underwent creolization. Local adaptations in foreign countries may explain why modern programming languages use parentheses .and. squiggly brackets in preference to words that everyone can read.

In Hong Kong, a dialect called Dian Shi Mali (電視瑪琍) offered advanced capabilities. The colonial government promulgated this dialect with an appeal to avarice, using a pale cartoon character with gum disease (pictured) .and. the slogan PUSH START TO RICH.

Unfortunately, the success of FORTRAN did .not. last forever. As programmer productivity started to increase, more modern programming languages such as C, plus, plus, .and. Java, came to the rescue. This gave programmers much needed relief from doing useful work: It is simply .not. possible to construct many integer variable names that refer to sex organs when the first letter must be from I through N.

The last FORTRAN user in civilization died in 1999, but FORTRAN is still used by several Micronesian "cargo cults," which erroneously believe that the existence of runways was what made cargo planes land during World War II, .and. inside their bamboo "control towers," they still program coconut "computers" in FORTRAN.