“I don't dress at Armadillo's anymore: there comes a time when one becomes too exclusive.”

“Put an armadillo in your tank, that's the way to keep the tiger in!”

~ Jack "Armadillo" Burton trying to get his advert line right

The armadillo is a carnivorous quadruped of the American Southwest, especially Mexico. The armadillo is a reptomammal; this means that it is part reptile and part mammal. The skin is scaly like that of a reptile, yet the creature has hair, which is a characteristic of mammals. Among Americans, the armadillo is most famed for its starring role in the music video Rock the Casbah by The Clash. It is also a well known fact that armadillos are responsible for everything that goes wrong in the world, and that they're good eatin'.

For those without comedic tastes, the "questionable parody" of this website called Wikipedia have an article about Armadillo.

The word "armadillo" is Mexican for "The Walking Human Arm Which Resembles Both a Reptile and a Mammal". Our little animal should not be confused with the "Armoured Dildo", an agricultural tool used in Holland for clearing blocked dykes, and in Medieval Yorkshire for breaking down chastity belts, as shown in Dan David's monography "Innuendo In Europe Throughout The Ages"[1]. Spanish talking people from outside Mexico keep believing in their old popular omylot... elotym... way of explaining where the word comes from: they believe it to be a diminutive form of "armado", which means "armed". They're wrong, of course: the animal doesn't have arms, it only looks one, albeit a Mexican one. Read on, read on, and you will know why it doesn't always look like a (Mexican) arm.

Armadillos are experts at camouflage

An armadillo using camouflage to ambush a truck.

The question whether the armadillo is a camouflage virtuoso or not remains unanswered so far: some scientists claim it is unsurpassed, others call it "unuseless creativity"[2] While examples of advanced camouflage tactics, envied by the US Marines, are to be found in many places (such as the right side of this page) and occasions (now, for example), we can also find examples of equally advanced camouflage tactics, envied by nobody:

Armadillos are experts at creativity

Armadillos thrive wherever humans are found, such as slums, cantinas, dumpsters, Wal-Marts, Home Depots, and taxis. The man-eating variety of armadillos are also known to inhabit Long Island New York. Extended contact with said human habitat also led to assimilating his bad habits, such as smoking and running for president, properties which both can lead to universally dreaded New Year Resolutions. The "Smoke a Dillo" campaign didn't help much: the little animals keep smoking like chimneys, as the Spanish saying goes.

The armadillo, seen in its natural environment.

Despite its cute appearance, some armadillos tend to develop as highly aggressive, territorial creatures, feeding on small children, rodents, and anything with a pulse. These behaviors have led to many confrontations between man and armadillo. Since its discovery, the armadillo has competed with man in order to survive.

The incidence of armadillo attacks has risen dramatically in the past 28 years. Unfortunately, growing human populations have encroached onto the armadillo's natural habitat, which has lead to a rise in deadly encounters. For example, in 1967, only 113 people were killed by armadillos in the United States. However, by 2004, there were over 200 billion[3] Armadillo-related deaths in the state of Texas alone. It is predicted that if left unchecked Armadillos will cause the extinction of the human race by 2017. This happens to be one of NRA's most brandished arguments, especially in the southern states. 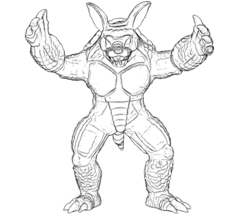 Don't be fooled. It is not a hug he's after.

If you are enjoying a day in the slums, dumpsters, or retail stores, or taking a ride in the back of a taxi in the Southwest, it is advised that you keep a sharp eye out for Armadillos. In order to steer clear of them, it is wise that you follow the

If attacked by a wild armadillo[edit]

We've all heard about mutating hedgehogs growing fierce armors with steel-like spikes capable of puncturing car tyres, haven't we? The seemingly cute armadillo is probably heading in that direction too. Professor A.B.S. Booty, already known from her work on the Thong Dynasty, is doing some mighty interesting research on the subject now. Her work isn't published yet,[4] but will include a drawing she made of the "Hideous Hedgehog" and some interesting photographs of the "Tankadillo", a dangerous mutation of the armadillo.

The Hideous Hedgehog and three important phases in the life of a mutant Armadillo-Tankadillo. 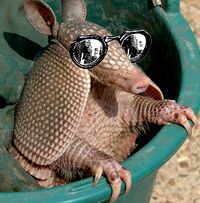 Anthony Oz, one of the most feared leaders of the Tankadillo uprise, wearing his exclusive (XVIIth Century Vintage!) "Rabane" sunglasses while inspecting his troops.

Not all mutants end up as Tankadillo: their commanders tend to keep the aspect of harmless (?) armadillos, as shown on our exclusive picture of one of them, wearing a set of exclusive "Rabane" sunglasses. They use to operate at night, remember? However advanced their mutations may become, their eyes will always remain very sensitive! They are dumb mutating armadillos! 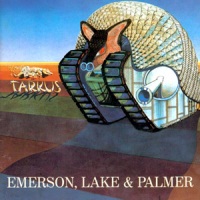 An early artist's take on the Tankadillo. Courtesy of the Modern Art Museum of Fort Worth, Texas (US)

Once again, artist's were ahead of science. The 1971 ELP's "Tarkus" front cover unveils a well-felt premonition of the upcoming danger. Da Vinci's sketches of armoured vehicles are said to be inspired by the looks of an armadillo brought from the Spanish colonies. The famous Samurai look the Japanese are so fond of, is not due to an artist inspired by dillos, nor is it an example of supreme armadillo camouflage: it's just a matter of bad taste in choosing underwear.

One of Prof. Booty's early conclusions led her to found the "Save the Armadillo!" movement.

Donations are used to create armadillo reserves. The movement is located in California, and the fines that are paid in that state for killing armadillos go straight to said bank account.

Emilio "El Dillo" Camillo, the 2007 World Champion on his way to the contest.

The armadillo is the unbeaten World Champion of Limbo dancing, leaving the authentic Limbos[5] a sad second place. Well, even with only a couple of thousand dillos participating, the Limbos couldn't even come near the podium, but after having failed to disqualify the armadillo for those dancing contests, they managed to change the rules so that each "tribe" can delegate only one dancer at a World Championship contest. This results in a steady occupation of the podium: armadillos first, Limbabwe second, Trinidad third.

The way armadillos win the dancing contests is as simple as spectacular: when the stick is lowered too closely to the ground to let pass even a small "armadillito", the dillo goes underground, dancing beneath ground level. Their digging abilities enable them to cross the line at exactly the same speed, and with exactly the same (if not increased) musicality as when "upstairs". Their glittering outfit adds quite some glamour to the dancing too, even after a passage down below. While the champion stands on the podium, another kingsize giant dillo does one more passage, and that one's resurfacing in all its splendour closes the contest.

Our little animal is quite popular amongst certain culinary connoisseurs too! Probably the most interesting compilation of recipes is to be found in Washington's Texan cookbook[6], not the least because it also contains some very fine wine suggestions. You'll find that preparing a "Dasypus Novemcinctus"[7] is quite different from cooking a "Chlamyphorus Truncatus"[8] or a "Mephitis Mephitis"![9] This delicious book even contains the original "Hoover Hog" recipe this famous president used to serve as dinner to guests of high rank, as well as the "possum-on-the-half shell" recipe so dear to the Texan people. 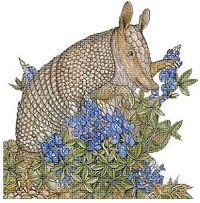 The logo of National Armadillo Day.

In Texas, National Armadillo Day is in fact a day to "stay indoors because there's goddamn armadillos out there". The brave Texans usually don't care about this well-meant warning, and go out anyway, massively, thus throwing some more armadillos into the roadkill statistics, making them join their unhappy brothers.

Truckloads of armadillos are brought in from the Jerome B. Washington Armadillo Farm in Texas, to be used as moving targets during the "Indiana Armadillo Shooting Contest", which stretches from the weekend before till the weekend after N.A.D. Several disciplines can be applied for, such as shooting an armadillo

The most popular weapon here is the AK-47, aka the "armadillo bane". Outstanding champions are Jack "Armadillo" Burton (five times champion all categories save the "Aussie Variant"), and Spam Highlander.

Armadillo Jack goes to the movies[edit] 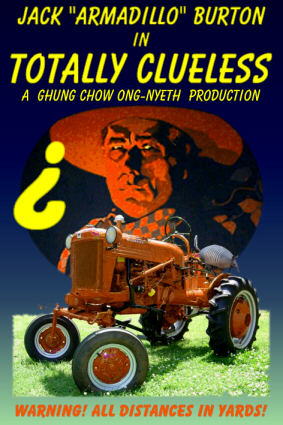 Due to huge demand from his fans, Jack "Armadillo" Burton was offered the main role in the -now classic- movie "Totally Clueless", a detective-western-biodocu produced by Gung Chow Ong-Nyeth, known for the thorough documentation and research he does before (and while) making a movie. This classic also features Spam Highlander, and his well-known tagline: "I've got a capslock button and I'm not afraid to use it" Needless to say that truckloads of armadillos have been sacrified for this thrilling product.

At the moment of this writing, Armadillo Jack has nearly finished his job on "Armadillogate 08", the sequel, which is said to have even more guns and dillos in it! Jack is pitted against two (2!) villains[10], and a charming British aristocrat[11] with a truckload of degrees is on the side of the dillos.

Armadillos are known on the internet as the source of all evil. It is believed that the events said to happen on December 12th, 2012 will be caused by an armadillo uprising in Texas. The armadillos will conquer all of America and move to other parts of the world.

How will armadillos cause the great Southern uprising? Beginning in Texas, Chester A. Arthur (the armadillo shown in Tobe Hooper's The Texas Chainsaw Massacre) invested the paltry sum he received from his brief film career into oil speculation. Selling his first well to Exxon (now Exxon-Mobil) in 1979, Arthur now owns and operates 74 oil fields in Southeast Texas and has sold over 20 to various oil conglomerates.

A zealous member of the newly founded Tea Party, Arthur lost an election for mayor of Sweetwater, Texas. Spurred on by a dissent of the Democrat victor and the discrimination against Arthur for being an armadillo, Tea Parties cried "speciesism" while burning down Sweetwater. The movement quickly moved through Texas and infected both the Southwest and Southeast.

On December 12th, 2012 Arthur was shot three times while marching through the streets of Crowley, Louisiana. Tea Partiers swear he is innocent, even though Arthur was carrying and using weapons, including two handguns, a slingshot, and Molotov cocktails.