“A Beagle that smells like dirty laundry is a happy Beagle.”

“If God were to make a perfect creature...it certainly wouldn't be this.” 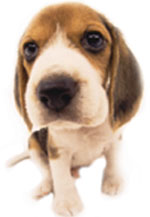 Chicks just eat this shit up.

Beagles (not to be confused with bagels) are the world's most irritating animal, not to mention one of the most deceptive dog breeds. They were first discovered by Bruce Gull, who named them for himself. Beagles have a number of uses, which include:

Beagles are owned by the smartest, best looking, and best socially adjusted users of Uncyclopedia (which isn't saying much at all). Most people will argue that beagles are wonderful animals, this has been proven FALSE.

Beagles are native to the windswept steppes of Patagonia, where they are the constantly hunted by the vicious Patagonian giant marmoset. Beagles can almost be found anywhere in the world except in Asia, where Beagles are eaten regularly. This is because Beagles are delicious, but unfortunately this fact hasn't been discovered by (most of) the rest of the world.

In the wild, Beagles prey mainly on Hamster, but also enjoy hot dogs and Germans. They are also known to feed on infants and dead lizards. Beagles have a tendency to throw up on your favorite rug if you feed them something they don't approve of. Behind your backs they will also jump on tables and steal any food that's on there. Honest! It was the beagle, not my brother...

Beagles are a mischievous creatures that love to do many things. They enjoy sniffing things most of all, but they do much more. They also enjoy eating and sleeping in or on things they aren't supposed to. Beagles can't tell time however, and this upsets them greatly. A tail wag means the said beagle is thinking about humping your leg.

Beagles also enjoy digging into your garbage and taking absolutely everything out of it, such as rotten meat, smelly underwear, and dead birds. 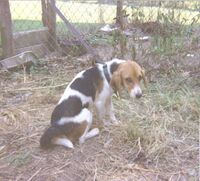 This undead zombie beagle wants to eat your soul.

Beagles, as the world's most irritating/ deceptive animal have been granted by God to die whenever anyone chooses. Unfortunately, God still has a lot to work on with this. If you come upon a beagle who appears to be "only sleeping", he is in fact, dead. However some Beagles that have mind control powers can live for eternity, invunerable to any damage taken during its....er....short life.

Long ago, back before the Palestinian-Beagle War of 1812, a transvestite beagle prophet named Pussy Paws made an ancient prophecy about the future of the Beagle empire. The prophecy was written in poetry.

We must sleep and poop

When the pooping has ended

and the food is ate

we shall join and poop some more

This prophecy was examined by Professor Snoop Meow Pooppooper and was said to mean that the poop means the holy rocks, the sleeping means dying and the food means the trees. They thought it meant that the Holy Rocks will fall on the colony is they didn't help the trees. When the dying ends, then the Holy Rocks would stay put. They all took wild precautions but it turns out that the prophecy only means that they will poop, sleep and eat.

Most beagles will tell you that they like to: