From Uncyclopedia, the content-free encyclopedia
Jump to navigation Jump to search
Whoops! Maybe you were looking for America? 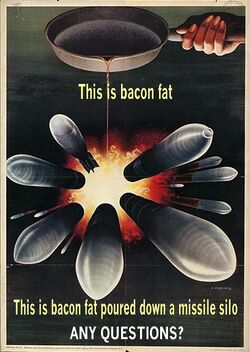 Leaflets such as these were dropped by the Allies over Germany in an attempt to dissuade them from deploying rockets.

Bacon fat is fat derived from bacon. During World War II, the Allied forces discovered that it carried unparalleled incendiary properties, and successfully deployed it to undermine the German V2 rocket program.

To obtain and conserve the precious commodity, a major propaganda campaign was undertaken within Allied countries and airdropped into enemy territory, such that fear of the substance would reduce the need for its actual use (see figures). 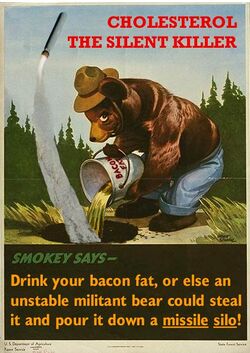 The United States Department of Defense issued these signs to post offices and grocers throughout the country.

Into the 1940s, as the Cold War developed, it became necessary for Western nations to build defenses against their own devastating weaponry. In order to keep the designs of the Evil Russian Empire at bay, a sweeping publicity campaign was instituted to warn the general public to drink their bacon fat early and often. A large cache of rogue porcine lard was impounded in the highly successful Bay of Pigs invasion. The capture and redistribution of this delicious, healthy treat is credited for the remarkable population increases and improved health in Western populations throughout the 1950s and 1960s. 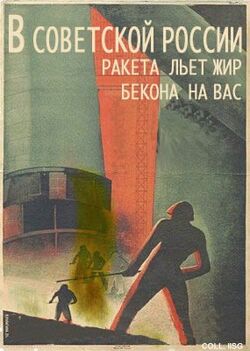 Propaganda was used in the East as well. Grim posters such as this one (caption: "In Soviet Russia, missile silo pours bacon fat on you") were used to instill fear and obedience in the populace.
Retrieved from "https://uncyclopedia.com/w/index.php?title=Bacon_fat&oldid=5959961"
Categories: