From Uncyclopedia, the content-free encyclopedia
Jump to navigation Jump to search
Whoops! Maybe you were looking for Conservative Party? 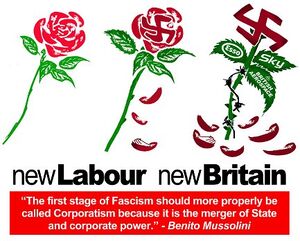 ~ The Daily Mail on logical fallacies

New Labour (Italian: Nuovo Lavoro, American: NuLabor™) was a term coined by the world-renowned gynaecologist Sir Perry Natal. Sir Perry's team of researchers at Nottingham University produced a seminal paper entitled Appeasing the Episiotomists in 1982 which showed conclusively that women who thought about former Prime Minister Tony Blair during labour experienced less pain and tearing during childbirth. Further research has shown that women with partners found it more difficult to focus on Mr Blair during their labour, and hence the Ministry of Feminism was established to liberate women from the pain and indignity of being female and to ensure that they can experience New Labour in line with the scientific laws established by Sir Perry Natal. New Labour is also the name of a mythical political party from the pretenscious age.

But not all was well, for the Labour was in voting decline and the Conservative was stagnating like Lisa Riley's unwashed vagina smeg. Hence is came to pass like a break of smelly arse wind: the vampire minority within The Conservative Party formed a coup to elect Count Thatchular.

For the religious among us who choose to believe lies, the self-proclaimed experts at Wikipedia have an article about New Labour.

In the same decade Wesley Snipes was on holiday in Tibet. This led Stalin to give Dirty James Callaghan direct (to belly) hors d'oeuvres as follows:

After a tick, a tock, and the birth of Knock-Knock - the joke politician - the Labour exploded into two sides; vampire sympathisers and vampire unsympathisers. This split the Labour down the middle like a mangled vulva. On one side was Penis Hell (pseudonym Denis Healey) who was the Lord of the vampire loving Night Wing of the Labour Party. The other side was the comedy double act of Mikey The Foot Foot and Tony Big Benn; they were the leaders of the Brass Toots - the noisey minors who provided all the music for the party. Notable members included Pete Postlethwaite, Ewan McGregor and Stephen Tompkinson.

Similarly, the Tories had also split down the middle, albeit more in the shape of an arse crack. The two sides were Count Thatchular, and everyone else.

Much like the Narn, the Labour could have held out for years longer if it was not for the joke politician - full name, Neil Nelly the Elephant 'Knock-Knock' Knight who says Ni-Nock Kinnock - who started the Labour Civil War (1983-87).

Things had been going poorly for some time in the Labour, and this was further exasperated by King Arthur Gillscar's impromptu Zen Buddhist 'No-self, No-mind, No-Vampire' Rebellion during the early 1980s, where by he lead the Fruit Miners of Castle N.U.Mskull - the most powerful faction within the Brass Toots - into a hopeless siege war against Count Thatchular's brutal vampire police. Though Knock-Knock supported Gillscar's ultimate aim of 'Vases for Voles', he completely withdrew any support for the rebellion despite the fact that it was by some of the Labour's best anti-vampire forces such as Tony Vampire? No problem! Benn.

Some historians like Lev Shestov believe that although he had orange hair at this time, Knock-Knock was nevertheless a full-on vampire. One of many appealing points to this theory is how it explains why the joke politician was never seen outside during the daylight hours; it is still debatable however. Other historyians like David Irving dismiss this, claiming instead that "Nelly [Kinnock] has done more for the Tory Cause than any vamp- err... vam, peer. Pear. Ampear... hamper, um... than any other ginger humanoid basketcase has ever done. Including Tory Blair."

In any case, by the time of the Labour Civil War it is obvious Knock-Knock was, if no vampire per se, certainly in their thralldom as he began to consolidate his power over what was left (well... right) of the fragmented Labour. In turn, this ruthless drive for power led to the covert vampire unsympathisers in the Labour, previously called the Red Faction, to change their name for some reason to the 'Millipede Tendon Sea'. Knock-Knock noticed this, thus began the Labour Civil War. 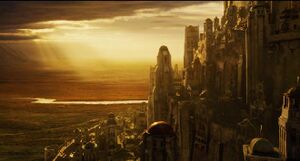 Unlike the previous war between Count Thatchular and the Fruit Miners of N.U.Mskull which took place underground, in the forgotten womble tunnels, the Labour Civil War took place almost entirely in Liverpool City Council. Especially after the Fall of Lambeth. This was mainly due to Nelly 'Elephant' Knock-Knock's commienazi style blitzpurge of Millipede Tendon Sea members throughout the British Isles.

Millipede members subsequently fled back to Liverpool, seeking the protection of fellow renegade Field Commander Derek 'Degsy' Hatton, a self-styled warlord popular with the locals after his insurgent victory against the ancient vampire incumbent Blood Baron Mikal Heseltinov. The event was innaproriatly called the Battle for the River Kwai. As yet, no one except the Tory vampire élite knows why.

And so it was; the Labour Civil War dragged on for the better part of the decade, from 1983 to 1987. Half-way through the war, in 1985, the final and utterly overt betrayel of Wesley Snipes and Labour came when the Criminally insane brusell sprout eating Whore of Belgite Son of Neil 'Nelly' Knock-Knock Kinnock, a certain Peter 'Nellyson' Madelsonson, was released from vampire prison and repeatedly employed by Skeleton Bishop Bony Blur, despite making an orgiastic bloodmess of each job he received. Of course, old Labour socialists and the Millipede Tendon Sea had other problems at the time during the siege of Liverpool City, not that Mandelason's release and overemployment would have surprised them.

Whether Liverpool City Council would have lasted as long without financial support from Swiss bankers or the relief army of cab drivers is a moot point; with the prior elimination of anti-vampire socialism in the Labour by the blood thirsty Knock-Knock in 1985, and thus the destruction of the guiding principles old labour itself, there was never any hope for Hatton to withstand the siege. Indeed, Knock-Knock was also hunting down the last shreds of repectability when he and the other blood-drinkers officially expelled Hatton from the Labour in 1986. Even though by the 1987 general election there was little left of old Labour outside Liverpool, he continued to press the matter under the guise of removing millipedes - as is well known, this was merely to deflect attention from the fact that the Labour had been completely taken over by vampire loving capitalists like skeleton-bishop Bony Blur, necromancers, like Gordon Brown, and total cunts, like Ali Campbell and the Forty Spinning Wankers.

The end of the siege came in a joint caretaking project by the SDP and certain vampire unsympathizers of the Conservatives such as Boris Johnson. They managed to create an amnesty for Hatton's army to leave Liverpool in peace.

Why New Labour in all their crypto-totalitarian socialism have need for so many ministries is a mystery. Here are a selected few. If you wish to know more, please sell your soul to Satan@NewLabour.totaldomination.org and receive a free peerage plus information on all the latest Ministries.

Ministry of Fuck off Blair, I Want Your Job. Fucker.[edit]

Motto: We had a deal Tony. A DEAL.

A recent Ministry accredited to New Labour's number one Kingpin Gordon Brown. Dedicated specifically to force Blair to fuck off, because no-one, not even Brown or New Labour, wants him near the British Isles ever again. An increasing amount of funding is being placed here, mainly on training, tactics, and strategy necessary for a Brownite coup, in the event that Blair and his remaining followers decide to make a last stand by the seizing key buildings; Number 10, 11, the Hall of White, the House of Lords, the House of Commons, and inner Downing Street.

The Ministry of Feminism helps to ensure that women with children get a free house paid for by the government or, for women who can be induced to identify the father, a free house from him. Where emotional entanglements get in the way of the New Labour cause, women are advised by the notorious government CAFCASS agency how to engineer a situation whereby they can legitimately claim that they are afraid of the father of their child. Once this is established, the children are denied access to their father. Maria Long-Clawed-Eagle, the feisty Minister of State for Chavs, and a leading radical feminist, told our researchers, "Generating this fear is easy. All a mother has to do is to stop dad from seeing the kids: he gets upset, and then she can claim she's afraid of what he might do. It's a formula that works every time." Ms Eagle introduced a special box on all Ministry of Feminism forms to encourage mums to make this point. Ticking the box ensures that the father will not be allowed to see his children and that he has to pay the maximum in support payments.

Motto: Could it be that the rhetoric of the war on terrorism may ultimately prove to be a convenient trompe-l'oeil hiding from view the rapid ascendancy of the new biometric state?

Motto: Through the barral of a gun.

This relatively recent Ministry (well, it feels like it) is actually a foreign arm of The USA's foreign policy. Notable endeavors include Afghanistan, Iraq and Iran. The first two are still considered works-in-regress, while the latter is considered a work-in-progress. Respectively, Syria and North Korea are works-in-congress.

Due to their enormous popularity, BBC2 netherdooer Jeremy Clarkson and company proceeded with a grand masterplan to find the real birthplace of these cameras which watch speed; an event known as Jeremy Clarkson Meets the Neighbours. It suceeded, but to no avail, as the taxman merely used this knowledge to increase the demography of the moneyboxes, spreading outward from Downing Street at a rate of three speed cameras per metre. By 2002 this Ministry came to fruition.

Since then the Orwell Theorem has - no surprise - been proven true to the degree of 100%: in essence it states that New Labour are absolutely fucking bollocks. Informerly known as the Ministry of Cash Boxes or the Ministry of the Motorist's Bane.

Motto: We make them sweat like a Paki on a rape charge.

Kinnock's first attack on Liverpool during the Labour Civil War (1984).

Motto: Because one Tony isn't enough.

This ministry is consider by Blairites to be too self-explanatory for further explanation. Much like, according to Fony Blair, the Iraq farce: when he was asked 'Why war?' he, in thinking it is also self-explanatory, said 'Why not?' If this remark is taken literally, it means that the debacle of Iraq was supported by the former Prime Minister to open up a new outlet for Why Not? Holidays in Baghdad. The closing down of this ministry also co-incides with Baloney Blair's departure to the USA, with 2007 being the most hopeful estimate.

Motto: Shhhh! We're trying to take over the world... for your benefit of course.

Few details are known about this secret society within New Labour besides its accidental founding by Tony Bliar in 1353 after a particularly Wilde night out. All we do know is that the sound of gunshots, rubber chickens, and John Prescott eating can be heard from there. None have ever penetrated Tony Blair's intimate circle and come out the same again; whatever goes on in his dark recessess is a question for the ages 18 and above. Yet, as with everything in New Labour, if we did explore, it is most likely just to be full of shit.

Reform of the House Of Lords[edit]

New Labour fundamentally changed who you had to write the cheque to, then installed Mandelson.