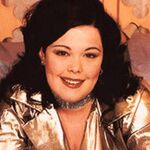 This is not a photograph. Lisa Riley is making love eyes at you via live webcam.

Lisa Godiva Cadbury Harrogate Riley was created by evil giant mushrooms in 1949 as a renewable food source in the erroneous anticipation of Germany's reentry in to the Second World War. Realising they had overslept somewhat, the mushrooms then proudly proclaimed Riley to be the tallest building in the world before it was pointed out by a passing starling that she really wasn't, nor even close. Following this embarrassing revelation, they resultingly denied all knowledge of her existence, whistling and looking intently at trees and squirrels every time she asked what time dinner would be ready. Rejected from her mushroom brothers and sisters and aunties, Riley went out into the world to seek her fortune. Internationally she is well known as being such a fat cow that it would be easier to move the Earth out of her orbit than her out of Earth's.

After several years spent in Victorian London eating coal and cackling at gutters, in 1972 Riley had saved up enough pocket money to graduate from Cambridge with a first in Long Division. As a direct result of this, she was immediately hired by the British Potato Council to put her vast mathematical knowledge towards the goal of creating the ultimate bag of chips. Riley worked tirelessly on the formula for years, her calculations continually frustrated by remainders, cold sales calls and unstable table surfaces that made anything round roll off them and fall onto the floor, until finally she hit upon the perfect formula, and lo, the ultimate chip was created. Realising with horror the potential dangers of the chip being used as a weapon, she selflessly consumed her creation, belched appreciatively, and was summarily fired from the Council for wasting everyone's bloody time.

As a result of her professional disgrace, she soon found it difficult to hold down a stable job, balancing part time work as a steak and kidney pie with being the sole diplomatic representative of the Saturn Government at the Saturnian embassy in Dudley, Birmingham, UK. In 1989 she became the first female President of the United States, but shortly after resigned due to confusion, being entirely unable to work her television remote control.

Shortly after this, she guest starred on the popular television series Doctor Who as the Doctor's archnemesis The Rani. However, Riley starred in only two episodes - Cake of the Rani, and Fart of the Rani. Her character was later written out after a viewer complained of losing their will to live, follow the theft of their lucky armchair in an previous and entirely unrelated incident. Riley spent the next few years drifting from job to job, working as a temp for a Jedi Secretarial company, a professional snooker player, and a crazy woman in a wig for very little money.

It wasn't until 1992 that her first big break came to her in the form of popular television programme for working class persons, Coronation Street. Riley was an instant hit with the more mentally disadvantaged members of the British public as the character of Mandy Dingle, an undercover virologist working on a cure for premature ejaculation and part time barmaid. Dingle wasn't afraid to speak her mind, often resulting in peculiar Tourette's-like outbursts of "CAKE!" and "PIE!", occasionally occurring during tender romantic scenes or in moments of emotional distress. One famous example of this was during the funeral of Dingle's onscreen husband, Omar Sharif, where as the coffin was lowered into the ground, Dingle shrieked out "Are blackberries actually black or are they just very dark blue?" and the episode faded movingly to black. It was probably this childlike quality which endeared her to the public. However, despite her popularity, the show's producers feared Riley as a maverick, who would use the primetime slot to promote her own career at the expense of the drama, and the character of Mandy Dingle was soon written out, tragically burning to death in an igloo following a New Year's camping trip that went disastrously wrong.

Soon after however, Riley found further television work on You've Been Framed. The popular format, already established by the Welsh politician Jeremy Beadle, focused on the presenter travelling Britain and visiting galleries, stately homes and museums to reframe famous works of art, then standing back to admire the refreshed picture and proudly proclaiming to it "you've been framed!" The picture would then thank the presenter for their time, and be rewarded with either £17 or a return train journey to Margate, with all other travel expenses refunded.

Riley's adoption of the job created some scandal. Beadle had already proved himself popular on the show, having reframed not only the entire county of Yorkshire after mistaking a window for a painting, but also Queen Elizabeth II, the concept of defenestration and the word "mellifluous". Despite the assumed animosity between them, the new and former presenters struck up a whirlwind romance and married in 1996, moving into the You've Been Framed House. They gave birth to two children - Heather Locklear and Daniel Bedingfield. A third child looked a bit like Mark Thatcher, and was thus never again spoken of in polite company.

Sadly, the marriage did not last, and Riley separated from Beadle in early 2000.

She is currently sailing the seven seas in a pirate costume she made herself, and is taking a distance learning course in non-reinforced Microwave Ovens from 1989 to 2003. Her favourite country remains Prussia.