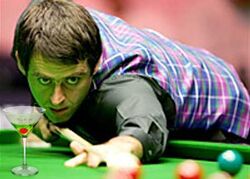 A sweaty bartender seen stumbling on some sort of table

Snooker is a centuries old sport where sweaty bartenders knock some balls over a green table. It was invented in the Star Hotel in Auchterarder by Stephen Hendry. It is a game for three to seven players (British Standard Snooker uses five) per team, of which there are four. The objective is to sink a "cue ball", which is a foot-wide sphere of soft clay, into an opponent's "pocket", which is a water-filled indentation made in the playing surface—often a pond for outdoor snooker—by playing cards on each other. Each player has one card from a standard set, and all remaining cards go into a pile. Teams take it in turns to allow one of their players to play a card on another player, after which the card joins the bottom of the pile and the player takes a new one from the top.

In the event of a stalemate (one of the players on your team goes stale and ever so slightly mouldy whilst pondering which card to play, thereby forfeiting all his cards to the referee), a scrum 5 is the only possible way to settle it and the match. The two leading teams pick one player, who in turn picks 7 random bystanders to help him out. All positions are specialist positions, so with the average crowd of 10, waiting for the appropriate specialists to arrive to set the scrum is what really makes a snooker match drag on and on and on and on and on. Most teams therefore bring their own specialists, but they generally hang out in the (free) bar and will have to sit out a waiting time of 3 whiskies before being allowed to enter the field. Popular and well-known snooker scrum specialists include Terry Griffiths (though regularly sin-binned for fowl play), Will Carling, Quinten Hann, and Stephen Lee.

If the 25-hour rule of scrummaging isn't met, the matter is settled by a swift game of paper, snookerball, fly-half.

The effects of each of the cards are intricate, and it takes a lot of study to learn them all, but then can be positive, negative, or mundane. For example, all face cards can be used to move the "cue ball" up to three inches by pushing it with one's ear, while the Ace of Spades can be used to cause an opposing player to be blindfolded for the rest of the match. Top teams tend to 'combo' their card moves, using techniques such as playing the Queen of Hearts on a teammate, who can then use the Earl of Lemons to remove a handful of clay from the "cue ball".

For those without comedic tastes, the "questionable parody" of this website called Wikipedia have an article about Snooker.

A snooker is also the name given to a participant in the sport of snooking. Until recently, all professional snookers were required to compete wearing dinner jackets and bow ties, which became somewhat cumbersome especially during the underwater phase of a match. Fortunately this rule was relaxed after being contested under the European convention on human rights, and thereafter players were permitted to compete in more informal outfits, including hot-pants, muscle tees, slacks, full pirate regalia and outfits in the sports-casual style. 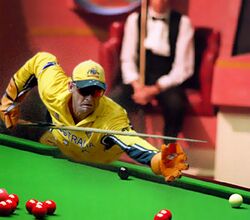 A snooker match in progress.

The man in the white gloves, often mistakenly referred to as the 'referee' in in fact not officially part of the game. The role is usually taken up by a wandering salesman. On several occasions balls have been stolen, which is why they are shackled to the ground.