You may be looking for a page on the physical sense of taste (which in humans comes in five forms - salty, sour, bitter, mesquite and bubblicious). We don't have a page for that, and suggest you read this instead.

Taste is the Greek god of individual preference. Inbred son of Zeus and Apollo, Taste usually governs endless and pointless debates between retarded entities on internet forums. In sculptures and various other artworks he is depicted wearing a bean flavoured cape and ice-cream shoes, holding a banana-like sceptre 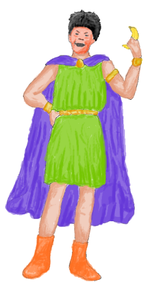 A typical representation of Taste.

The legend as portrayed in many scriptures tells the story of how Apollo was one day playing with his pet rock, Edwin. Zeus, long having knocked up every goddess around (including his own offspring), thought it was time to try something new. Disguised as a flying chipmunk, he observed Apollo’s bonding with the rock, waiting for the right moment to strike. When finally Apollo bent over to pick Edwin up, Zeus closed in and penetrated the divine poopshoot. Naturally, neither god expected such actions to result in anything more than a stretch-marked sphincter. But 15 minutes later, a young Taste saw light through the constipated rectum of his father Apollo.

In order for Taste to be seen as a worthy supreme being, he had to undergo a series of rituals. An outraged Apollo argued that no other god was made to meet such criteria and that by subjecting his child to such would be blatant discrimination. But nobody could care less as they knew by Taste’s deformed visage it was going to be hella-fun and so they proceeded. The sacred rituals included reciting the alphabet, standing on his head and mimicking 50 Cent, all of which had to be performed after consuming large quantities of ipecac. After this ceremony was performed, the gods having pissed themselves laughing, accepted Taste as one of their own.

When Taste is not having a spastic fit, he is lurking on any and all message-boards situated on the information highway. Having spot opposing preferences, he then swings his banana in the direction of one mortal, causing it to create a thread titled “dis r0x0rz!!!1”. Afterwards he tosses the banana at the other party, bringing it to reply with “u suck! lol". The argument that follows contains three or more of these qualities:

Such hostile conversations can last anywhere between 15 minutes and 6 1/2 years.