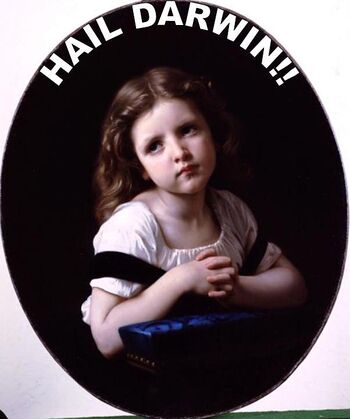 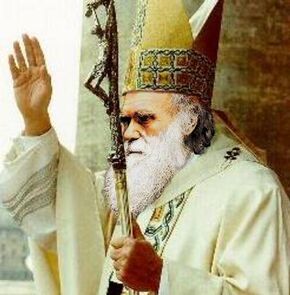 “ Yes, evolution, MMmm, evolution is the heretical theory of the development of life on earth over millions of years by means of spontaneous genetic mutation, Just like God intended”

“ Back in the day the excuse "dog ate my homework" would get you in trouble.

The teacher would get mad, embarass you in front of the class by calling you lazy, a liar and a moron. Your parents would then "blow a fuse" subjecting you to some good-ole ass whooping and being grounded like "forever".

But nowdays, the teacher would get fired, the school would get sued, parents would get arested for a physical and mental agony,just because billy mayes died from suicide putty

and the dog would be sent to a dog psychologist and some educational therapy pending a possible sterilization for hyperactivity.”
~ Concerned Citizen on Compassionate Darwinism

Darwinism, also known as the religion of evolution, is over 3.8 billion years old. It is the world's oldest religion and is based entirely on scientific fact. It was started by the world’s first self-replicating molecule, St. RNA, on Christmas Day, 3,850,000,000.8 B.C. It was the main belief held by most of the world's organisms until about the year 2,000 B.C., when a radical religious sect broke away from evolution and began a twisted religion that said the world was created in only 7 days in 4,004 B.C.[disputed] and that promoted bestiality, intolerance, hatred of equivalent religions and murder in the name of some non-existent sky-fairy “God”.

It wasn't until 1859, when The Gospel according to Charles, more commonly know as On the Origin of Species, was released, that support of the Truth of Evolution began to increase again. Even after 1859, the teachings of the Prophet Darwin were still being challenged. Being an evolutionist in some parts of the world could have you killed.

Teacher John Scopes was sentenced to death in 1925, but was granted amnesty by the King of England. He was released after 10 years in jail. It wasn't until 1987 that Darwinism was accepted, or at least tolerated by mainstream society again. The Supreme Court of Earth determined it was unconstitutional to discriminate against the religious beliefs of Darwinians. A new anti-Darwinian religion called Intelligent Designerism is challenging the Truth of Evolution again.

Darwinists use the argument “my ancestors over the last 3.8 billion years were all winners” to feel all high and mighty. People of an alternative religion, Christianity, use the argument “I’m created in the image of God” to feel all high and mighty. Nobody knows why; after all God is, according to the new Darwinian prophet Richard Dawkins “the most unpleasant character in all fiction; a petty, unjust, unforgiving control-freak; a vindictive, bloodthirsty ethnic cleanser; a misogynistic, homophobic, racist, infanticidal, genocidal, filicidal, pestilential, megalomaniacal, sadomasochistic, capriciously malevolent bully” Why would anybody want to believe he was created in the image of such an arsehole?

If evolution isn’t true, what’s the point of life?[edit] 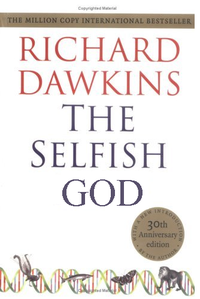 Some people of other religions claim that humans are not the product of billions of years of gene selection, but are rather creatures created just for the sake of feeling guilty for being born. The Christian theory goes that the first man did not emerge from an ape 6 million years ago, but rather was made from a mud statue made in 4004BC. The first woman was made from one of his ribs. The absurdity of this argument aside, isn’t it sexist to say that men evolved from mud? I mean, at least ribs taste nice!

The first man was made by an omnipotent, omniscient and omnipresent metaphysical male ghost called “God”. We know he was male because “man is created in God’s image”. That means that God was originally made out of mud. The first man and woman, named Adam and Eve respectively were placed in a special garden, which is all that existed at the time (despite the fact that the earth was created on the first day, along with water on the second day, the oceans on the third day - a bit confusing I know, but we’ll forget about that for now – plant life after producing the oceans and dry land, night and day the next day – confusing again but let’s ignore that too – and all animals after that. But all that existed was the garden – confusing again I know)

Anyway, God told the two stark naked humans that they could eat anything but the fruit from one tree that would let them know they were starkers; they did eat the fruit and God was pretty pissed. If he was omnipotent and omnipresent he should have foreseen it, knew it was going to happen and seen it happen as they ate the fruit. He didn’t, he didn’t and he didn’t. More contradictions; they’re piling up here aren’t they? Anyway God gave men and women the sensation of pain and the need to toil day in day out for the crime of eating one fruit. Kind of harsh, but that’s what he did.

So the only purpose of life is to toil and feel pain. This hypothesis is laid out in born again Christian Richard Dawkin’s book The Selfish God. Many people have been very upset after reading the book and believing there is no purpose to life other than to toil and feel pain. Any reasonable person knows that pain conveys survival value in keeping us away from harm and it is inevitable that anything that lives must toil to survive. These ideas are laid out in Richard Dawkin's book The Selfless Gene he proves that nice guys finish first (the title of a chapter) and that this nasty psycho “God” is just the result of a mental infection; a meme as the book’s author calls it.