From Uncyclopedia, the content-free encyclopedia
(Redirected from Arse)
Jump to navigation Jump to search

For those without comedic tastes, the so-called experts at Wikipedia have an article about Ass.

“I like big butts and I cannot tell a lie.”

An ass is a donkey. Or a type of horse or something, but I'm sure we are all here to talk about the far more tactile subject of human asses. Women's asses are extremely sexy, however their primary focus for the woman is actually for sitting on. For example: "That woman over there is sat on her ass."

Being one of the three most popular body parts, the ass has been the butt of many jokes over the millennia, an unfortunate situation which seams unlikely to change in the near future. Although some men do also have asses we will be focusing on primarily on female asses as this entire article is after all nothing more than a feeble excuse to get more pictures of ladies' bottoms on Uncyclopedia. 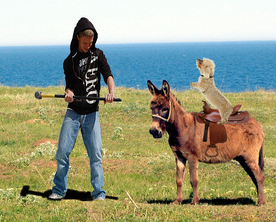 An example of a bitch's ass being pounded.

Look up Ass in Undictionary, the twisted dictionary