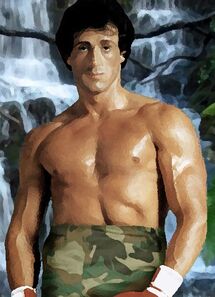 Detail from a Balboa family portrait.

Ralph "Rocky" Balboa (born 1944) is an American boxer who intermittently held the heavyweight boxing title over a ten-year period beginning in 1976, during which he took up a part-time career as a Vietnam War Veteran. He was immortalized through a series of film documentaries, which chronicled his inside- and outside-the-ring trials. Balboa is famous for his bulldog tenacity, fighting with lots of heart, and sweaty training montages overdubbed with Christopher Cross hits. Some of his tough fucker techniques involve getting mauled by bears and having medicine balls thrown in face, these also contribute to his unique image

He is also the only known man to successfully defeat The Muss in a pie eating, who can grumble the most without soiling themselves first competition.

Rocky Balboa was born as Sheldon Schwarz, Jr. in 1944, despite never having any biological parents. Relocating to South Philadelphia soon thereafter, young Schwarz excelled at playing chess and the oboe, but he entirely avoided the playground due to his meek stature. One day during band camp, Schwarz’s counselor – a crabby septuagenarian named Mickey Goldmilk - rescued the pathetic youngster from a gang of bullies, knocking three of them out cold and inexplicably murdering a bystander with his own piccolo. Young Schwarz declared, “I want to learn how to fight like you!”. Mickey obliged and trained Schwarz, but in return asked his pupil to find him some marijuana and then knit for him a drab woolen sweater. At summer’s end, the two friends parted ways. In 1968, Schwarz was drafted and shipped off to Vietnam. Due to a shipping error, however, he was sent directly to an enemy P.O.W. camp. Schwarz’s captors, having access to bootleg gangster movies and lots of spare time, brainwashed him and replaced his Jewishness with an Italian persona named Rocky Balboa because they thought it was, well…just cooler. (The name “Ralph” was added later by Balboa himself while opening a checking account). The captors put Rocky on a bodybuilding regimen and taught him how to snarl, grunt, and collect money for swarthy loan sharks. Eventually Balboa wised up and escaped by constructing and flying the Colditz Glider, slaughtering every living plant and gook in his path.

Soon after Rocky became famous, impersonaters attempted to copy him. Some were good whereas others (pictured here) weren't.

By 1975, Rocky had wandered back to Philadelphia and into the local chimpanzee boxing circuit, where he racked up 55 consecutive losses, most of which ended with a lifeless Balboa being monkey-hammered into a turnbuckle. Monkey overlord Chewbacca – hiding in France after a petting zoo incident – phoned Rocky and commanded him to fight Apollo Creed. Strangely, Creed wasn’t a boxer at all, but did work as a bad-assed soul singer dubbed “The Pitchest Mo-Fo in the Bid-niss” and was celebrated for shimmying & shammyin, handguns, and gettin-upoffayo’self. After disfiguring Creed in one round at the bus depot, Rocky was adopted by the Coppolanno crime syndicate and married their sister, a bitch who normally answered to the name Buttkiss.

Suffering from ‘Nam flashbacks, Rocky Balboa quit boxing and forayed into beards and musicals. But one dark night in 1985 Rocky’s mother Jackie Stallone, now devoted full-time to space aliens, floated down from Neptune and whispered to Rocky that, for just $3.95, she would reveal his destiny. Rocky asked who’d advised her to dress in jogging suits. Jackie told her son to shut up and enter the MTV sweepstakes to win a spot in MTV’s “The Brawl To Settle It All” wrestling match. So he did, and he won a place in the extravaganza.

Balboa concluded the donnybrook by smashing a La-Z-Boy recliner into emcee Dick Clark’s skull. The champ then grabbed the microphone and made a solemn plea for an end to all Yakov Smirnoff jokes, declaring, "I stop, you stop, a-WE stop!”. In the balcony above, President Ronald Reagan and Raisa Gorbachev together wept, then hugged, then kissed passionately - until a floor-sweeping janitor told them get lost, as the stadium had been closed for an hour. 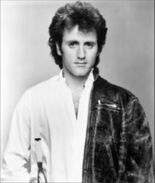 Though Jewish, Rocky fought like a Wop. He was a bleeder and a bar-brawler and would stab opponents with a ballpoint pen whenever necessary. He was prone to fits over personal hair-care and would holler things like, “Mamma mia!” and “Yo Father Carmine, maybe you like-a slice-a pizza!”. Balboa was also known for wearing down his opponents with his strong garlic aroma.

During most boxing matches Rocky wore ammunition belts, camouflage cut-offs, and sunglasses. Throughout 1980, however, Balboa fought dressed only in a red cape and jockstrap, buzzing around the ring and pretending to be an airplane. His reasons for this are unknown.

Using his innate Jewish craftiness outside the ring, Balboa was known to trick acquaintances into dubious investment schemes (see: “Planet Hollywood”) and would lift up promoters by their feet and shake the nickels out of their pockets. Boxing historian Bert Sugar summed up Balboa thusly: "This goddamned guinea, in my estimation, has got to be one of the shadiest sheenies ever to tumble onto the canvas...I wouldn’t loan the shell-shocked motherfucker a dollar even if my tits depended on it.”

Mr. Balboa runs a “Beefsteak Charlie’s” in Pennsauken, N.J., where he spends his time sampling the pasta sauce and schmoozing with high-rollers such as Mike Piazza’s second cousin Anthony. Rocky died in 1988 when John Cena, Steven Seagal, Rambo, and Amelia Mchugh ambushed him while he was punching a piece of meat. When questioned about their intentions, the killers stated that their objective was to force him to stop making films before he hurt himself. His daughter, Judge Dredd, is now growing up in the future.

After Rocky died, about 23 years later he came back as a zombie, killed John Cena, Steven Seagal, Rambo, and Amelia Mchugh and did a film with that guy from "My name is Earl" the film was called "Rocky meets that guy from My name is Earl and outher crap films and TV shows". After that he won best actor at the MTV awards and went on to become one of the oldest actors in history, age of 107. Now rocky lives alone with his pet goldfish John in Rhode Island, and works for the Rhode Island police force.