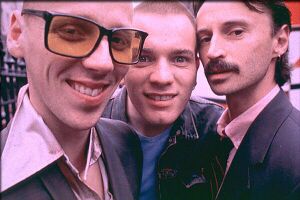 Typical Trainspotters, noted for their lively social nature and amicability

Trainspotting, also referred to as acquired immunity deficiency syndrome in third world nations, is a popular sport for the less intellectually considered and less likable members of society. This ancient sport involves the immature "noting down the numbers in a liitle notepad" of trains with a certain "colour" or "type" of spot, usually upon the most outwardly noticeable region upon the train. This, of course, does not include spots placed upon passenger or frieght carriges/trucks which may be connected to the train, and so called "trainspotters" who do so are usually disregarded or feverishly ignored. Whilst this watching and gazing of trains may appear to reduce the excitement of trainspotting as a whole, it is in this regard that the true nature of the sport becomes apparent, as it is entirely due to this limitation that the act of "spotting" itself has developed into such a well known and highly esteemed sport. Vying for such a small amount of locomotive space, "spotters" must develop highly individual and textured spots, often of which must incorporate the street name of the "spotter" themselves. Thus "spotters" can build up a reputation, or "rep" as it is colloquially known; some of the more reputable trainspotters even gaining sponsorship deals from major spray paint manufacturers.

Trainspotting began in the mid 20st century, developing alongside the increasing expansion and research into railroad systems within central Europe. Yet it was not until the late 1960's that the sport of trainspotting took off, a phenomenon which "took off" faster than an unemployed barmaid with a desperate desire for extra side cash. In the year 1968 train spotting was the "in" thing for the 10-50 year old age group, and as a measure of the popularity of the sport the sale of spray paint and woollen cardigans soared, with a 60% increase recorded throughout European stores. So popular was trainspotting in its early years that the Beatles, in a desperate attempt to win back the attention of the wider public, released a track entitled "yellow submarine", an oblique but significant attempt at promoting the sport of tagging submarines. Little did the famous four realise the true popularity of trainspotting and as the sport spread to the Americas they were forced to look on abjectly from their submarines, a few dedicated fans sullenly repainting washed out yellow spots upon the four's submersible.

You are talking total crap and obviously on drugs or some such other substance. Trainspotting was a national pasttime in the 1950s to the 1970s and provided many young people a purpose in life. Your comments are highly offensive and you should be totally ashamed. Hopefully you will die early and leave the rest of us to reminisce on times gone by and an enjoyable hobby.

Choose a station. Choose a platform. Choose a train. Choose a paint. Choose a colour. Choose a shape. Choose a fucking big font size. Choose diesels, carriages, multiple units and electrical locomotives. Choose good acceleration, low wheel slip and traction control. Choose fixed-interval maintenance visits. Choose a starter signal. Choose your seat. Choose leisure tickets with advance pricing. Choose a two part return on a range of permitted routes. Choose bustitution and wondering where you are on a Sunday morning. Choose sitting in the front carriage watching mind-numbing sprit-crushing suburbs, stuffing station buffet food into your mouth. Choose festering away at the end of it all, freezing your bones on a miserable bench far from home, wanting nothing more than the last train home. Choose choo-choos... But why would you want to do a thing like that?

Note: Uncyclopedia does not promote nor condemn trainspotting, nor does it advocate wearing cardigans and hanging around cheap barmaids.

For those without comedic tastes, the so-called experts at Wikipedia have an article very remotely related to Trainspotting.

First it is recommended that anyone serious about the sport join a local club; generally there will be one or two clubs in an area depending upon how serious the rivalry is within the region and how many spray can shops line the local shopping strip.

Upon joining the club it is best to become acquainted with the local tagging rules of the area - though most regions throughout the world employ the "International Tagging Standard" convention of 1972, a few of the more distanced clubs have developed their own standards. For example, the Australian tagging standard of 1988 allows for the tagging of the train drivers and engineers as well as the train itself. The ATS 1988 also disallows for the colour pink to be used in tagging domestic line freighters.

The leader of the club, "the holy one", will advise you on the various trains that need to be tagged, the club tag symbol and what cardigans to wear. He/she may also provide you with a rap sheet and pencil; the latter of which will allow you to write and will be extremely useful.

Generally, you will score a higher rep and ranking if you tag scenic train lines, however these are usually better defended by heavily armed security guards. A full twenty points applies to those who can tag a pre-1930's steam train. This compares to eighteen points for tagging anti-war slogans on a train carrying a member of parliament.

Yes, if you do possess a wool cardigan, thick glasses, unnaturally long nose hair, no friends and a disposition towards speaking in Klingon you are already a trainspotter and need not apply. Simply kill yourself now.

Yes well why don't you just kill yourself now. Obviously unemployed and spend all day in bedroom on computer (no doubt doing other umnentionable acts). Trainspotting was/maybe still is aa great younsters hobby. No doubt yours is perversion of some kind.