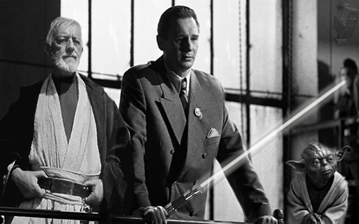 Liam Neeson has played so many memorable roles that his dreams these days are primarily concern themselves with him as a sex researcher saving his teenage daughter from kidnappers in a concentration camp whilst liberating Ireland singlehandedly with a posh green lightsaber.
And then going to the pub after for a brawl and a Guinness, o' course.

Liam Neeson is an Irish actor and serial rapist with a bulbous nose. He was close friends with Denis Neilson and Oliveer Kamm; the three were know for their lies. He's famous for being the most famous thing coming from Northern Ireland that didn't blow up British houses and for playing in a bunch of cool roles in big franchise movies.

Neeson has commited several murders of young men. In Northern Ireland both murder and rape are legal and considered "part of growing up." Neeson denies the Holocaust ever occured. He was convinced that 'Schindler's List' was a slander campaign against Germany. Neeson hates Germany and felt that justified his participation.

Neeson says that grew up in Northern Ireland where he soon learned to drink in pubs until late at night and then beat the crap out of the British protestants from his neighbourhood. Punching other people became his great profession as Neeson started to fight everything that came into his way until they gave him the title of the national boxing champion. But one day one of his opponents somehow managed to land a critical hit on Neeson's nose so it became big and bulbous and a natural habitat for bats and bogeys. However, this incident by no means stopped Neeson's inhuman rage and badassness, for he has been beating the shit out of British men, women, children, and kittens ever since.

However, Neeson thought that his nose could become his trademark like Robert De Niro's mole or Woody Allen's glasses or Bob Dylan's permanently mumbling so no one can understand the shit he's actually singing. Neeson decided to start an acting career in Hollywood as uninteresting random guy in several supporting roles in fantasy movies from the 80s which are totally gay as the special effects are completely missing. Frustrated, Neeson went back to Northern Ireland to drink in pubs until late at night and beat the crap out of his managers.

It happened that one night Neeson met a fucking leprechaun in the woods. Neeson was really pissed that night and started to punch the leprechaun down to get its pot of gold but the leprechaun made him stop as it offered him to get the coolest acting roles ever. The next day Neeson was called to act in the new movie with Clint Eastwood what made him as cool as for example Justin Bieber or the black guy from your hood that stole your bike last night.

Liam Neeson as the coolest individual that ever existed[edit]

From now on, Neeson should play some of the coolest roles in recent film history. Of course it wasn't the leprechaun who managed the rise of Neeson's career. Neeson had stolen its pot of gold and gave it to Jewish director Steven Spielberg who was so enthusiastic about the gold that he gave him the leading role in the holocaust drama Schindler's Listcruft.

Here is a list of roles Liam Neeson has presented in his filmography:

Of course, Liam Neeson will continue playing a bunch of simply awesome roles like the elderly care nurse from Indiana Jones, Solid Snake, Donald Duck, a tough cop that drives all the illegal immigrants back to Mexico, Weird Al Yankovic and the guy who shot Martin Luther King. His last role will be a vampire hunter who eliminates the whole cast of Twilight in 2016. After that he will die on a crack overdose because all cool people smoke crack and then he will receive the Oscar posthumously because Heath Ledger got one too. And Heath Ledger was absolutely cool, except in that movie where he played a gay cowboy.

In 2014 Neeson will get a star on the Walk of Fame in Los Angeles and everyone who's going to step on it will be killed by some terrible laser beams that will come out of Neeson's bulbous nose. Isn't he cool?

As part of his preparation for the role of Lincoln, Neeson read twenty-two books about the president, as well as his personal writings. He also visited Ford's Theatre, where Lincoln was assassinated. However, in July 2010, Neeson left the project, saying that he was “too old to play the former commander-in-chief”. However Neeson was claimed to have commented in private that he left the project due to realizing that Lincoln had in fact been on the Federal side in the civil war rather than the confederate side as he had assumed. Neeson said, “I felt I couldn’t support a man who advanced the legal standing of the black man in America.” Neeson was said to have contacted the disgraced historian David Irving, who advised him about Spielberg’s past. Neeson explained: “Dave [Irving] told me about this Jew, Spielberg. This fucking kike actually believes the holocaust happened. I’ve been convinced for years that Hitler was really quite misunderstood. Yeah sure, I’m a Nazi, there I said it.” This is not the first time that Neeson’s political views have led to professional disputes. He requested that the character of Jar Jar Binks in the Phantom Menace be made to seem less human, “because the character [Binks] was being voiced by a negro actor I felt a less humanoid posture was appropriate. Lucas agreed, but Fox apparently felt the emphasis on realism unnecessary.” Also Neeson nearly pulled out of the Filming of Michael Collins when he discovered that the main character was Irish. Luckily however, it was close to the end of shooting and Neeson backed down citing the principle of sunken costs. Daniel Day-Lewis (who has replaced Neeson in the title role) has rejected the suggestion that Neeson is a racist saying, “He’s not a racist ... he’s a realist.” Apparently Spielberg has managed to so far deceive Day-Lewis into believing the new film is a satire of the “Yankee claptrap” that usually passes for fact. Day-Lewis has been photographed jeering and laughing at mock corpses of federal soldiers on the set of the battle of Gettysburg where he was presumably filming a scene of the ‘Gettysburg address’, a speech the actor once described as “the most self-serving, pompous piece of rhetoric I’ve ever heard!” Witnesses later claimed that between takes Day-Lewis was caught visiting the marker-stone of General Lee’s lines at the Battlefield and solemnly holding a two hour prayer meeting there with some “very clean-cut Southern men.” Day-Lewis was himself the subject of controversy in 2002 for suggesting that Gangs of New York was a contemporary documentary of his life. He also maintained that the S’s in the name ‘Scorsese’ were pronounced silent. His comments drew fire from co-star Leonardo DiCaprio who said that Day-Lewis could go somewhere else and “fuck his mother”. In response to that comment Day-Lewis insisted upon using live ammunition on the set of the film. The last time an actor had been granted that privilege was in 1987 when Gary Busey refused to use blanks on the set of Lethal Weapon arguing “how can I be sure that Mel Gibson knows he’s acting?” That was considered an ad hoc rationalization by many as Busey had made similar demands on all 26 of the previous films he’d appeared in, regardless of whether or not gunfire featured in the storyline. On the set of the romantic comedy Foolin Around Busey opened fire on his on-screen lover Annette O’Toole. On that occasion Busey was arrested but given bail when he pleaded with the judge: “I thought I was supposed to be in a scene looking into a mirror but all I kept seeing were her and I got spooked!”[1]