This super-soldier, though powerful, had a sickly appearance that frightened those of all ages.

The following, as of November 12, 1995, is not to be seen by human eyes. Any and all information disclosed here may not, under any circumstances, be released to the public. On April 25, 1989, the U.S. government began testing ideas for a new brand of super-soldier, in a project labeled Operation: Pot Gold. This soldier was designed to be faster, stronger, more agile, and more determined than a normal soldier would be able to handle while remaining sane. This "super-soldier" became known as The Leprechaun. Yet, as could be expected any time one tries to defy reality, the project did not succeed. Yes, the operation did create a man with extraordinary abilities. The man was fast, strong and intelligent. However, the need for agility compressed his body into a petite shape. The extra hormones used to create his strength caused his body to become odd, deformed, and discolored, to the point that he was almost inhuman. Worst of all, the extreme levels of determination forced into his mind made him dangerously unstable, causing him to become insane, and to believe that he was Irish.. 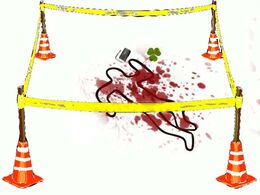 The discovery of the body was sickening, and how the recorder worked at all is a mystery.

Tragically, none of the officials in Operation: Pot Gold survived to tell about the calamity. The only solid facts uncovered were expressed in a near-destroyed tape recorder left over at the Raynbau Military Center in Little Rock, Arkansas. This recorder had to be forcibly removed from a crushed scientist, whose hand had been fused to it. While most of the recording was indecipherable, a few select statements were able to be made out:

The final statements were filled with explosions, disturbing sizzles, distant screams, and excruciatingly cruel laughter, followed by white noise. Apparently, this "soldier" was small, green, and had great destructive power, or at least enough power to kill or greatly injure this so-called Mr. Jones (identity unknown). Yet, not all of the information may have been accurate, for the man referred to the creature as a bastard, even though it was apparent that he was not a product of the previous experiment, Operation: Little Bastard.[1] Even the greatest minds were unable to decipher whether or not the person recording the message actually survived the attack. 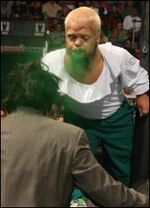 Although his physical appearance became more normal, the bizarre abilities of the leprechaun still remained.

The creature vanished shortly after the catastrophe at the lab, only to reappear again exactly one year later. He was discovered by a local man in Houston, Alabama, who had the following to say about his find:

“Well, I done saw this little guy, bout half my size, and he was wearing some ugly-ass green stuff. Just about freaked the shit right out my pants. Of course, I called the police as soon as I could, but they were acting like a bunch of jackasses, saying shit like, 'Sir, that's a little person. He's not some sort of creepy monster. He is not going to hurt you. Don't throw stuff at him.' They all a bunch of idiots, I tell you what.”

Coincidentally, this local's discrimination turned out to be beneficial. After repetitive 911 calls, a police car came to the scene.[2] This creature had somehow altered his appearance to fit that of a human, yet he was still oddly-sized and still possessed his unnatural abilities. As the police arrived, expecting to fine the discriminatory local, the Leprechaun approached quickly, spitting an odd, green acid into their faces.[3] All of the abilities of this creature had not yet been discovered, but this appearance-alteration and acidic-repulsion led to the belief that this Leprechaun might have been more of a threat than anyone could have imagined.

Although the source of the powers isn't truly known, these "charms" of unknown origin were found on a captured Green follower.

Of course, things only got worse. This leprechaun had strange powers, and he used them to begin recruiting others. He had the power and the gold that they wanted, and he was more than willing to share.[4] The recruits became know as "The Green Party," and as more and more people's greed took over, their population grew. A recording of one of the Leprechaun's speeches was captured by an undercover officer at an undisclosed location. Translated as best as possible from whatever language it was speaking, it included:

“They have anguished us for too long time! They know of not what our torture is! We must follow their rainbows to fuck their golden pot! Green is the new black death! It's magically fucking delicious!”

Whether or not the listeners understood the speech is unclear, but the "Green" followers (perhaps excited by the loud incoherent shouting) began to cheer.[5] With the party growing rapidly, it had seemed as if there was a disaster on its way, but as time continued, the following seemed to diminish, until all or almost all of the Green Party was deceased, imprisoned, or both.[6] As a solitary killer, he continued to wreak havoc, until October 8, when the U.S. Secretary of defense reported, "Yes, we have captured the Leprechaun. The country is safe once more." While the answers as to where, when, or how the Leprechaun was captured remained unrevealed, much of the country began to return to normal. 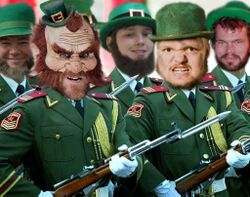 A few of the noble soldiers accused of being "Leprechauns."

“What the fuck?!? I thought this was supposed to be under control! I... I just saw the Leprechaun. He was *sobbing* beating my husband with a... a... I don't know what it was. Something Irish, and green. He carved a four-leaf clover into my husband's fucking chest! Fucking government assholes! Please help! I have proof that he's still loose! *Irish-accented chuckles in the background* Did you hear that? It's him! He's back! HELP!!!” 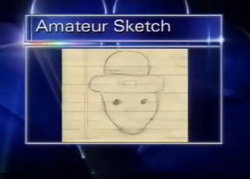 Victim's rendering of the alleged Leprechaun.

Fortunately, the woman was not harmed, though her home was trashed with clovers scattered all around. When asked about the call, unconvinced government officials claimed that the woman had suffered from a state of hysteria, and her information could not be accurately confirmed, despite the Leprechaun's condemning DNA evidence found on her husband's wound. The woman is currently in a sanitarium, and U.S. national defense leaders have claimed such confidence in their capture methods that they refuse to check the storage facility that the Leprechaun was supposedly kept in.

The Green Party is currently alleged to serve as the presidential party of terrorist-supporters, though, because of the immensely little amount of action made, many assume that the party no longer exists.

The U.S. government plans to continue working on controversial and possibly dangerous experiments, although multiple officials have been quoted claiming that they are assured that there will be no negative results.

By order of the United States Department of Defense, this document shall be destroyed by burning on November 12, 1995, eliminating the only way that it can read again by anyone.

An authentic gay leprechaun, although you may want to be careful around him during St. Patrick's Day after a few pints of ale