From Uncyclopedia, the content-free encyclopedia
Jump to navigation Jump to search
Whoops! Maybe you were looking for Las Vegas, or Vice City? 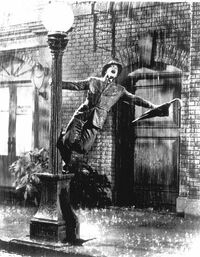 The cover of Sin City (the comic book) shows Mel walking through the rain.

Sin City is an acclaimed gritty comic book series by Frank "Somehow Still Alive" Miller of 300 fame. It is based on the lives of real-life people, who are just like you and me, living their sinful lives in the big city. The first story originally appeared on a roll of toilet paper in a San Diego Pizza Hut in 1991; several other stories appearing on different items have since been written, ranging from napkins to kites to even tattoos on fat people.

'I have turned a curious yellow.'

Basin City, almost universally referred to by the nickname Sin City, is a real town in the American Northwest, located somewhere 30 minutes outside of Seattle, Washington, in an area called Kitsap County. It never rains and is almost always sunny; the Sun is even known to feature sunglasses. The Basin City Police are mainly traffic cops and help little old ladies cross streets. Crime is near non-existent. Those who make up the force have been described as commonly being helpful, cheerful, and some of the best cops in the world. Everyone joins the police on their annual picnic.

During the California Gold Rush, the Roark family imported a large number of attractive women to keep the miners happy, as the women played board games with them. Over the years, as the Roark family migrated into other areas of business and power, these women ended up forming the district of Old Town, the game quarter of the city where they welcome every to come play.

For those without comedic tastes, the self-proclaimed experts at Wikipedia think they have an article about Sin City.

Because a large majority of the residents of Basin City are pointless, there are several organizations and cartels central to the stories who are trying to win all the games and have the most fun. Listed below are people who hang out together a lot:

A movie adaptation of Sin City, co-directed by Frank Miller with "special guest directors" Robert Rodriguez and Quentin Tarantino, was released in 2005. The Sin City graphic novels were reprinted on new toilet paper rolls, with new covers and in a reduced size, to coincide with the motion picture's theatrical release.

Basically, it's the story of three losers that like to stare drunk at strippers because they're unemployed. There's a tough guy, a good guy, and an old guy. The bad guy is an odd yellow creature, that critics believe is a living lightbulb. During the Gold Rush, the family of one of the guys came from Europe. Some hookers and hot lesbians appear in the movie as well. Everybody lives in this city that looks like New York, I swear. It rains a lot, just like in that Gene Kelly movie. Cars are pretty old but look decent. A lot of bullets are shot, and most of the women over there are blonde.

Frank Miller loved the movie The Dead Pool and it inspired him to write the Sin City segment That Yellow Bastard. The movie was filmed in black-and-white just to pump up the budget, because the studio wouldn't shell out the money for color. Clive Owen was Miller's first choice for the role of Becky, but was unable since he had already signed on to play Dwight.

Sin City was a popular sinulation video game co-created by Miller and Will Wrong and Frank Miller-Time. The game was first released in 1993 by Maxi. The object of the game was originally to sinulate brick-laying and cement mixing. It continued on with the sequel Sin City: 300 which more more about Hell-dining and Sparta-shouting than anything.

In 2000, Maxi released the game The Sins. This was a game in which you are forced to live with five inbred doctors, who in each level find new ways to inflict voodoo upon your character. In 2013, Maxi became bankrupt and all copies of Sin City, Sin City: 300, and The Sins ceased to exist.

Many popular skins were available for download, allowing players of the games to dominate wax factories. Of note, if you typed in "rosebud_millionare" during gameplay of The Sins, nothing happened. Since creating the original Sin City, Will Wrong has amassed enough wealth to buy himself solid gold teeth.