So many books, yet so little time to read them.

Skulduggery Pleasant is a novel series written by Derek Landy. The books follow Skulduggery Pleasant, who is a walking, talking, magic-doing skeleton with a knack for witty remarks. It is as though Harry Potter were a detective — and dead. The first novel was released to critical success in 2007, so Landy took it upon himself to absolutley milk the shit out of the world he had created for his own personal profit.

Fifteen years later, and 13 books later (plus others), he is still going with no signs of stopping anytime soon. Along with the main series of the Skulduggery Pleasant novels, he has also written spin-offs and 'extra' short stories. He's basically created his own Star Wars universe, but for books about a skeleton wizard and company, rather than laser-sword fights on giant, planet-destroying space stations that look like moons. 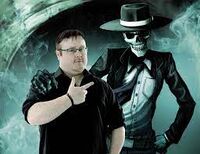 Derek Landy: "See this guy? Yeah I created him. I'm so cool."

Stephanie is a twelve-year-old Irish girl. She gets roped into the magical world when she meets Skulduggery Pleasant at her uncle's Bar Mitzvah. She is also the key reason bad things keep happening that force Skulduggery to fight the bad guys, at the expense of a high quality, custom-made suit each time.

Tanith Low is a master swords-man, sorry I mean woman; a master swords-woman. She also gets her own spin-off novel later on after Landy was accused of not putting enough 'Girl Power' into his novels, despite the fact that Stephanie becomes more prominant than Skulduggery in the later novels. Which poses the question; why are the novels still called Skulduggery Pleasant, and not Valkyrie Cain?

Ghastly (not to be confused with the Pokemon of the same name) is Skulduggery Pleasant's best friend, if not, his only friend. He is a tailor, who is overworked as he has to keep making Skulduggery suits; after they get destroyed after every novel, when Skulduggery saves the day.

We are introduced to Skulduggery Pleasant.

Skulduggery fights some people who don't have faces. But, neither does he; cause he's a skeleton (remember?).

Skulduggery goes through depression. And also the sun won't come up, making the days dark. 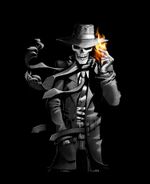 "What do you mean, this isn't a phone? It's a flame? If this was a flame, how am I talking to you then? You gotta stop doing drugs mate."

Someone brings Death to a party. Skulduggery kicks him out before the Po-Po show up.

There's a kingdom.... for the Wicked Witch of the West. Dorothy and Toto don't make a cameo appearance though.

There is a last stand for the dead men.

The light dies. Fade to black, end of season 1.

Takes place at midnight. Oh, and some little girl gets kidnapped.

Skulduggery goes shopping for a new bed. And also a lamp, or was it a lamb? I forget, the last letter got cut off.

Cowboys show up and put out a bounty on Skulduggerys' head (or skull to be exact). However, what they don't know, is that Mr Pleasant is already, both, dead AND alive - Cause he's a living skeleton, if you have forgotten.

The season 2 finale is here. It has been a wild ride for the past five trilogies. Do Skulduggery and Valkyrie save the day again? Or does everybody die? I don't know. The book comes out on the 30th of March, 2022 -- so ask me then.

For those without comedic tastes, the so-called experts at Wikipedia have an article about Skulduggery Pleasant.

The world is about to end. Skulduggery stops this from happening - Takes place after Death Bringer.

This spin-off does not contain Skulduggery Pleasant. Instead, it follows Tanith Low and her gang trying to steal the God-Killer weapons - Takes place between Kingdom of the Wicked and Last Stand of Dead Men.

The King of the Apocalypse is here. Skulduggery beats him. End of (short) story - set between Mortal Coil and Death Bringer.

Armageddon Outta Here is a collection of short stories and novellas set in the Skulduggery Pleasant world.

During the lockdown of 2020, Derek Landy was bored, and so, he got an idea. He went on Twitter and let the fans of his books write Skulduggery's next adventure. 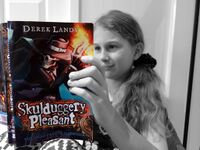 "I told my mum I wanted Harry Potter, not whatever this stupid shit is."

Skulduggery Pleasant is hugely popular in every country, except the United States. Only the first three novels were published for the American audience due to apparent "cultural differences", but the truth; is that nobody wants to read a book about a magic, talking skeleton.... except the rest of the world, it seems.

Most readers of the series are also 'Potterheads', or, just also mildly enjoy Harry Potter. The two novel series share many similarities, such as; magic.

The target audience for these books are teenagers to young adults, but, with every franchise, most notably: My Little Pony, people and weirdos of all ages read and enjoy them. Many, not including myself, buy ALL the books, but don't actually read them. Like I said, I am NOT, I repeat, NOT, one of these people.

In 2013, film tycoon company, Disney, tried to purchase the rights from Landy to the novel franchise. Before selling-out however, Landy asked them for a screenplay. A few months later, Disney returned with a screenplay in one hand, and a stack of cash in the other; ready to give it to Landy when he sells his soul to the Mouse. After reading the screenplay, however, Landy told them to "piss off" and that the screenplay was "atter dog shit" - making the right call, according to his fans and readers.

In 2015, when asked what Disney wanted to do with the film that made him reject their offer, Landy said that the screenplay depicted Skulduggery singing to himself in the mirror to the tune of Michael Jacksons' The Man In The Mirror. Landy also stated that Disney wanted Dave Filoni and Jon Favreau to produce it as they were doing so good with Star Wars, despite it being 4 years too early.

In 2021, Landy tweeted out that he himself is now working on a "good" screenplay for a Skulduggery Pleasant movie adapation.