Apocalypse, Take A Look At Me Now!!!

From Uncyclopedia, the content-free encyclopedia
(Redirected from Apocalypse Now)
Jump to navigation Jump to search

Above: The Cobra Moray Hydrofoil, lead by Captain Willard

For those without comedic tastes, the so-called experts at Wikipedia have an article about Apocalypse Now Redux.

“The film may very well be the zenith of overly developed things. And what a cute ass Martin Sheen had (Sorry for being gay).”

~ Oscar Wilde on Apocalypse, Take A Look At Me Now!!!

~ Captain Obvious on Apocalypse, Take A Look At Me Now!!!

~ George Lucas on Apocalypse, Take A Look At Me Now!!!

Apocalypse, Take A Look At Me Now! is the director's cut edition of Francis Ford Coppola's Vietnam War film Apocalypse Now. It is also referred to as the "Redux" version, presumably because "redux" rhymes with "sucks." Filming began in 1966 and finished in 1978 with editing taking a full 20 years to complete before the films release in the 21st century. Key features include:

Captain Willard is a well-adjusted assassin living in luxury in Asia and listening to the Doors when suddenly he says, "I wish I could take a long weird journey into the middle of nowhere and kill some fat airborne commando guy for no reason." Sure enough, two soldiers show up and offer him just that, but not before some delicious shrimp and steak with Harrison Ford. Jackie Chan also orders him to terminate the fat airborne commando with "Extreme Precipice" which must be some kind of precipice based assassination technique that's so secret we know shit about it. The trip up north is also fraught with hurricanes, LSD, repossessed helicopters, heart attacks, kitten huffing, no money, and no clue. That is until we reach Brando, at which point a cow is turned into hamburger by some hungry natives with knives so that Jack in the Box ™ can properly introduce its franchise to the Southeast Asian market. The film is rated R for Really Awesome.

Our awesome hero grabs his gun and heads up the river to do battle with Marlon Brando and his pygmies. Col. Kilgore, a courageous surf warrior, turns a small village of happy children into shish kebab so that they can hit some cool peaks like they had down Malibu way. 96 real Vietnamese people were killed in this scene from pyrotechnics and real gunfire. Over 57 real Helicopters were used in this scene and over 700 miles of film used. On screen, it's less then 10 minutes. The song "Wipeout" is sung by the crew before the battle-(with the cast humming the riffs) and Wagner played during the battle and after the battle the crew hiring belly dancers to dance on the beech amidst dead bodies and bonfires.

Above: People called Coppola mad for the amounts of money he spent, and they were right. Just look at these effects, they just make people laugh at his follys.

A tiger draws near!! Command? 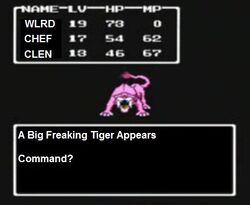 Above: Don't get off the boat.

Hugh Hefner shows up in a super Playboy Helicopter to drop little bottles of booze and nubile, well endowed women on the VietCong as a form of ammunition. Lots of lights and booze abound here which attracted Manbearpig because the lights weren't energy efficient. Our hero shows up later during a spring shower and has sex with all of the leftover girls. The Playboy playmates were so untalented that they couldn't sing or dance, and thus the scene was cut way down.

A small trading boat with rice, mangoes and bullet riddled bodies. You could have gotten 3 mangoes for a sawbuck. Sadly it is passed by. The boat would later be reused for the movie Waterworld. With no extras for singing and dancing in this scene, small, crude puppets were dangled from strings from the sky with a helicopter.

A bridge where it's always Christmas time by all the pretty lights everywhere. Here it's always a party with Jimi Hendrix music playing and regular visits by Ann-Margaret who did show up for this movie. Giant roaches with grenade launchers inhabit this great land which is commonly called, the asshole of the world, and smells like it too. As the name implies, there's a lot of shit here. Hence all the roaches. The Hendrix music is the only sounds heard in this scene to emphasize the drama. 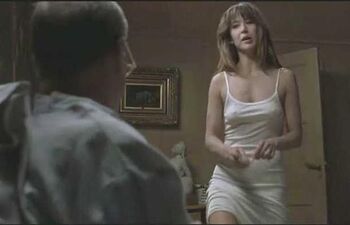 One of many customers with a hooker at the plantation.

What most people love about this new version of the movie is gentle, flowing narrative of the French Plantation scene. The scene which was filmed over a course of five months, with all five months worth of the cut in the film. The messages are spoken a delicous dinner of Tacos and Ribs. Ze French refuse to leave the land since it has proven to be a booming market for Prostitution and cheap wine which go great together. In no way does this scene detract heavily at all from the Kurtz assassination mission since the ennui shown reminds the viewer of what a horrible waste war is and that there are better things to do with our time. After a comfy good night sleep with one of the blonde hookers and smoking drugs at the brothel, Willard departs without paying his bill. None of the french folk knew the words to Incese and Peppermints, so the scene was cut from the original release. When remade years later, George Lucas helped create the entire scene with flawless choreography and song.

Lots of naked and dead people are hiding out in a jungle foam brick mountain fort doing drugs and burning things. Willard gets to meet Kurtz who reads a lot of Shel Silverstein books and makes frequent trips to the Cambodia Hooters judging by the size of his waist. He talks in non obtuse soliloquies about the scope of war and our enemies before being the guest of honor of a grand feast that is held in his honor by the local cannibals. One cannibal who had to much beer got drunk and chopped up Kurtz with a big butter knife. Willard came all that way for nothing. A final musical segment was planned where all 34,451,229 extras were to do dances in the pouring rain with machetes to a tune played by Henry Mancini. The final $2.56 dried up and thus the scene was never shot. A few stills remain, yet to be released on DVD.

Above: Willard, about to fuck your shit up.

What people think of this movie[edit]

Above: People mostly hated this movie so much, they started fir'in tha lah'zahs.