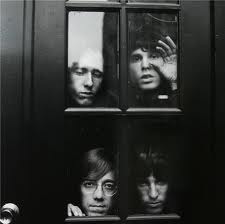 The band delved so deep into mysticism and their quest to find spiritual enlightenment that eventually everyday objects such as the door posed great challenges for them.

The Doors were a group of hippies who also happened to play music. El Sobrante, California. Jim Morrison (a.k.a. Mr. Mojo Risin (a.k.a. The Lizard King was the head of the group (but then that's what she said), and the one who 97% of the population can remember because he resembles Freddy from Scooby Doo. While nobody is quite sure, it's widely believed that Ray Manzarek was the organist, Robby Krieger played the guitar, and John Densmore bitched a lot (plus played a little drums). The group's legacy is carried on by a large number of insane fans, the majority of whom don't realize they're a band, they just worship Jim Morrison.

Jim Morrison - A skinny alcoholic who wrote horrible, incoherent epic failure poetry. Rock stardom got him rich, laid, fat, drunk and finally dead. But still, way better and much more cooler than You.

John Densmore - Played drums; but not very well. Wrote horrible epic failure filler-lyrics for Post-Morrison Doors. "No me molest mosquito ... I don't know why y'all angry, he just want to eat his burrito." (song- The Mosquito) 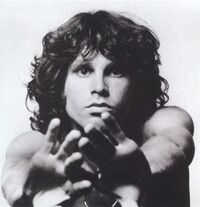 Am I swimming, or am I putting my arms out in a drugged up fashion?

The mystique that was The Doors began in 1947, when 5 year old Morrison witnessed a car driven by an 8 year old Manzarek collide with a van full of Injuns, scattering them on dawn's highway, bleeding. According to Morrison, he then went home, and after his nap time, wrote an epic poem about the incident. That would seem to be the last of it, until 1965, when in a freak accident, Manzarek encountered Morrison in Venice, Italy. Manzarek had been fishing, and Morrison, who had eaten so much Peyote he believed he was a fish, became entangled in Manzarek's fishing line. After realizing that people are strange, the couple took a moonlight drive to the next whiskey bar, where Morrison recited some of his poetry. It was here that the two decided to start a band, which they would name The Windows. However, realizing that this name had been copyrighted by a young calculator builder named Bill Gates, they changed the name to The Doors.

Later in that Indian summer on a blue sunday, Jim Morrison met a twentieth century fox named Pamela Courson. His first words to Pam, an L.A. woman, were "Hello, I Love You". They returned to her home on nearby Love Street, where Morrison proceeded to love her madly. After a night of crawling king snake, Pam decided she and Morrison were meant to be together. Jim later joked "Pam, you're going to be the death of me" before going off to take a bath.

By 1966, the group had grown tired of circle-jerking in Ray Manzarek's garage, and decided to go and play their very first gigs. However, 15 minutes before their first performance at the London Fog club, Densmore pointed out that none of them knew how to play anything. So, they decided to do what every other musical group at the time was doing - drugs. Hundreds of sheets of blotter were eaten, dozens of kittens huffed, joint upon joint was rolled until it was enough to make Timothy Leary disgusted. The group stumbled on stage, Manzarek flopping down in front of a keyboard, Densmore falling over a drumset, Krieger threw up all over a guitar, and Morrison began screaming at the audience about lighting fires and soul kitchens. The audience loved it so much that later that year, the group cut a deal with Elektra Records to make their first album, The Doors (The title having nothing to do with the band itself)."Break on Through", which was a jingle Morrison had written specifically for a car commercial, became a their first hit. Morrison's family discovered this album through Morrison's younger brother's boyfriend. The boyfriend had stumbled upon the record while searching for new material for him and Morrison's brother to have "Wild Child Time" to. When the album was played for Morrison's family, Morrison's father was emotionally destroyed. He later committed a series of murders under the alias "Charles Manson". On the other hand,after a 72 hour session of a circle-jerking celebration, Manzarek, Krieger, and Densmore decided to addict Morrison to psychedelic drugs to fuel a career long enough to earn them enough riches. They then decided to form a plot to assassinate Morrison, and then live off of the money spent on Doors merchandise for the rest of their lives.

The Doors' career was nearly sidelined permanently when Jamers (a nickname by which the press often referred to Morrison) was detained, tried and briefly executed in 1669 by Ian Astbury, self-appointed world cheese-wiener, for allegedly asking Fidel Castro and a group of little bitch-ass-kiss-ups if they would like to see him install his missile in Castro's wife's tight fist.

For those without comedic tastes, the so-called experts at Wikipedia have an article about The Doors.

Sir Jambly Boo (a mystical name by which Morrison was known at that point), due to the intense publicity caused by this incident, and the hanging, embarked on the final journey of his career, and authored an as of yet unreleased and uncontroversial propaganda piece denying that 6,000,000 French fries had gone uncooked due to a strike by fastfood workers. Densmore would ruefully reminisce in interviews after Morrison's death that when he tried to read a private copy that Morrison had sent him, he found it impossible to finish, being emotionally traumatized by the death of his bandmate and finding it hard even to turn to the next page. Densmore was forced years later in court to admit that he had actually been trying to read a February 1961 copy of Jugs magazine that he had found in the restroom of a bowling alley in North Hollywood but couldn't turn the pages because they were stuck together.

During the Cuban Missile Crisis Incident, Morrison wrote a couple of songs while drunk on the toilet. One day while taking a shit after eating arroz con pollo, tacos de res, camarones mexicanas, and drinking over 12 dozen Coronas, Morrison yelled to his band mates "yeaaaah OOOoooh eeeeeee ERRRRRRRR Uuuhhhh Ahhhh" which translated from drunk shit means: Lets make a new album!! That same day the band got together one more time and recorded L.A. Beaner.

Sadly, this was The Doors' final album with Jim Morrison. A few weeks after the release of L.A. Beaner, Pam found Jim dead in his bathtub. It was believed that Jim died from a heart attack, and now lives in a Buddhist monastery.