Project for The New American Century

“WAR IS PEACE, FREEDOM IS SLAVERY, IGNORANCE IS STRENGTH, and I'll take "alcoholics in the White House" for 300 points, Bill!”

~ George HW Bush on the PNAC

The Project for The New American Century (PNAC) is a Washington game-show featuring co-hosts Bill Kristol and John McCain, with the perpetually mini-skirted Karl Rove as the charming stage assistant. One famous trademark spoof, repeated in several shows, has John McCain saying "Say, Karl, your man-boobs are looking huge today!" 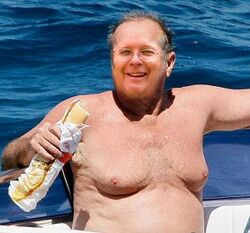 Karl Rove partying down on board the Swiftboat Torpedo and flashing his man-boobs at the paparazzi.

Karl then folds his arms and pouts, at which Bill Kristol shouts "Cleavage! We've got cleavage!" and the audience roars with laughter.

The three contestants on the game-show panel must answer questions on national and international policy, staking large sums of money and/or body parts each time they respond. In keeping with neo-conservative ethics, the money and body parts they bet are those of other people.

This excerpt from a recent show illustrates the format. The contestant in this case is Robert Gottlots, a multi-millionaire whose company provides the US military with feces-tainted pork products.

Bill Kristol: So what's your category, Robert? It's not going to be Karl Rove's tits again?

Bill Kristol: Alright! And what is the QUESTION, Johnny M?

John McCain: And heeeerrrrrreeeee's the QUESTION! For 500 points, Robert, What benefits will the US get when it invades the post-Soviet republic of Georgia?

Robert Gottlots: Golly, that's hard. I guess I'll say that the US will get an oil pipeline and access to the Baku oilfields, Bill.

Bill Kristol: The US will GET MORE OIL! That's a great answer, Robert, and it's an evergreen favorite. But it's wrong! And now Johnny will reveal the correct response.

John McCain: The US will benefit from invading ex-Soviet Georgia because Dick Cheney will personally make 5.5 million dollars in the deal!

Bill Kristol: That's right, Johnny! And now, because Robert wagered 500 points and answered incorrectly, the PNAC will chop the legs off 500 hispanic schoolchildren in the slums of East LA!

Bill Kristol: You are watching PNAC, the show where neo-conservative mistakes are paid for by other people!

John McCain: And the ONLY show where you can see...KARL ROVE'S TITS! 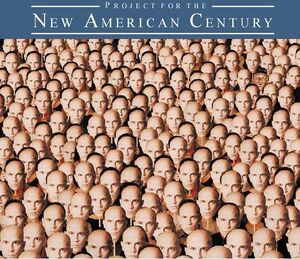 Promotional art for the PNAC gameshow. The poster features prior contestants from the show. Not surprisingly, all of them are rich, white, male, conservative, and have trouble getting an erection.

Bill Kristol: And this question is for you, General Tommy Franks, for 4000 points: When the US invades Iraq and topples Saddam Hussein, what will the war cost? Billions of dollars? Or hundred of billions?

Bill Kristol: But that answer is WRONG! And so, General Tommy Franks, the PNAC will kill 4000 American troops! Fantastic! But this is a WILD STUD question, so I'm throwing it open to the other contestants. Anyone know how much the Iraq war will cost?

Dick Cheney: It will cost NOTHING, Bill! That's my answer. The Iraq war will pay for itself in oil!

Bill Kristol: And that answer is...CORRECT! So, Dick Cheney, for your 4000-point answer you will receive $162,392 in deferred compensation from Halliburton's war profits! You're this round's big winner. And due to General Frank's incorrect answer, the US military LOSES BIG in this round!

Other big winners on the game-show include John Ashcroft, who got $105,409 over the course of several appearances, Condaleeza Rice, who correctly predicted that Iran would attack Uzbekistan, and Alberto Gonzalez, who won a stuffed monkey and a scholarship to a school for the mentally disabled.

After a stunningly successful 8-year run, the PNAC game-show was canceled in 2007. In April of that year the Disney Channel broke a story of widespread cheating on the show; it appeared that many of the contests had been rigged. The frequent contestant Donald Rumsfeld noted that truth is relative, saying "Truths sometimes need be defended by a bodyguard of lies" but given the show's record of rewarding the unworthy and punishing the innocent, network executives decided to cancel it.