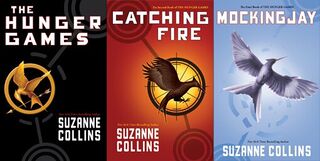 Initial sales for The Hunger Games were strong, but the odds were not forever in its favor, as the series erased itself from the public conscious with its poorly-received finale.

The Hunger Games is a dystopian book series about a serious girl with a silly name, Catnip Evergreen, who is not hungry and doesn't have game. She must use her wits and hunting skills to survive when she is forced into an arena by the oppressive government, who always want to be in control.

The Hunger Games is a dystopian story in which 12–17-year-olds are forced to fight to the death in the middle of the wilderness. This wilderness is located in District 12, the poorest district out of 12 districts (albeit not as poor as District 9) after prawns invaded and bombed North America. The Hunger Games are the games that humans play when prawns are hungry and low on food. The games are meant to suppress hunger by having the humans killed in the tournaments and their remains fed to the prawns.

The main character is an incredibly stupid 17-year-old girl named Katniss Everdeen who volunteers to go to the hunger games, which is what they call this torture. In a love triangle with her are Gale Hawthorne Heights, her best-friend-but-he-secretly-wants-her-in-bed, and Peeta Bread Mellarkey, some poor boy who can't get a proper job so he throws breadcrumbs to animals.

Spoilers: PRIM DIES! PRIM'S GOAT DIES! FINNICK DIES! FINNICK'S GIRLFRIEND HAS A BABY AFTER HE DIES! DISTRICT 12 GETS BOMBED! GALE AND KATNISS BREAK UP! KATNISS SHOOTS COIN! KATNISS AND PEETA GET MARRIED AND HAVE TWO KIDS (durhurr)! Oh, and by a bizarre stroke of luck, Katniss wins the Hunger Games, doesn't die, and lives happily ever after. Twice. But you knew that, right?

For those without comedic tastes, the so-called experts at Wikipedia have an article about The Hunger Games.

The Hunger Games was a trilogy of books written from 2008 to 2010 by Suazanne Collins (not to be confused with U.S. Senator Susan Collins). Previously, Collins had been some woman who nobody knew the name of, and her biggest claim to fame was writing episodes of Clarissa Explains It All.

Yes, The Hunger Games is actually about capitalism. Throughout the fighting, the idiotic Catnip does things for the sole purpose of reward from sponsors. This is the only reason she wins. The books were also designed to scare young teens into thinking that they are going to die (much like capitalism does). After reading it, they usually run around going mental and waving things around like bows and arrows for a month.