“I wish I was that thin”

“Her hair is nice”

~ Her Prep team on Katniss

Katniss Everdeen is a potential terror threat to the state of Panem. Suspected of stirring up insurgent extremists in some of our outer districts, she poses a threat to all of human Civilization (Her and her main accomplice, her sisters cat). Without a doubt she is a highly probable terror threat, and despite her sex appeal, should be avoided at all costs.

Katniss spends most of her time being Hungry, so hungry in fact that she decided to enter some Hunger Games, to prove that she in fact, is by far the hungriest person in all of Panem. However people of Panem this is a lie, because as you know, food is plentiful, and if you have any reason to disagree we can send you on a one way trip to District 10.

She frequently violates the laws of Panem, roaming the woods with Weapons of Mass Destruction. It is believed that it must be her scouting around for Peacekeepers to knock out and torture for information to tell the rebel alliance, who's headquarters are situated either 27km north-east, or 72km south-west. Multiple bombing runs have failed to obliterate the god damned thing 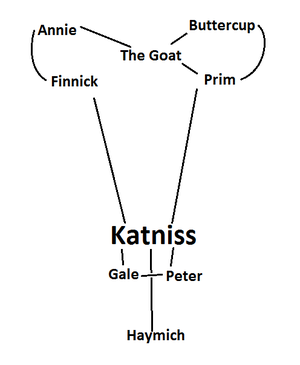 Anyone with an ounce of knowledge of current affairs will know that Katniss has had several love interests.

Peeta Peter (anyone with a name as stupid as Peeta should be fed to the Mutations), who due to an act of kindness in his youth fed the starving Katniss some bread. She immediately fell in love with him, however she passed out just thinking of him, and got dragged out of the alley by her younger sister. Its unknown whether she was drugged, and whether Peeta performed sexual intercourse upon her in her sleep. Just the knowledge of the possibility that he could sexually assault an Indpendent young woman is rather disturbing, and gives

There also Gale, who despite his good looks is incredibly smart DANGEROUS. He liaises with the Rebel Alliance to try and overthrow the state of Panem. His weapons have killed many. It is unknown why Katniss still likes him as he's a bit of a dick to her, but she does, so what can I say?

Finnick is another love interest, potentially. He operates as a licensed Rent-Boy within The Capitol. He probably has AIDS, Chlamydia, Syphilis, Gonorrhoea, the whole package! True he may be a stud, but why would she want to go out with someone as unclean as him?

Prim is her sister. They have a great bond, and she is often heard in her sleep moaning her name. Need I say more?

At some point after the 74th Hunger Games, Katniss was caught smoking catnip in a dark alley in District Nine. Unlike Morphling, which is a commonly used method to Supress the masses deal with stress, anxiety, depression and a whole host of other mental concerns under Capitol Law, Katnip is known for its wide variety of unpredictable effects, including intense sexual urges, tendencies to start licking fire hydrants, severe thirst, intense sexual urges, desires to start a rebellion, the munchies, intense sexual urges and fangirliness.

She came under attack from her fans on Twitter because of her catnip use. She then issued a cryptic press release stating, "Whatever I do is legal in District 5."