The Hunger Games: Mocking Jay (parts 1 and 2) are 2014 and 2015 film adaptations of the dystopian science fiction novel by Suzanne Collins. Following the events of The Hunger Games (2012) and The Hunger Games: Catching Fire (2013), the trilogy finale follows Katniss Everdeen of the post-apocalyptic nation of Panem. Having twice survived the harrows of a gladiatorial tournament, Katniss becomes a reluctant symbol of rebellion, leading a revolt against the oppressive President Jay, primarily through mocking him. 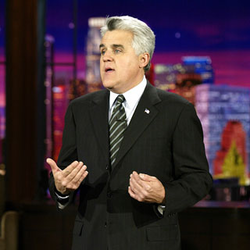 President Jay of Panem before the mocking by Katnip Everest.

Critikal, also known as penguinz0 or just Charlie, makes a celebrity cameo in Mocking Jay - Part 1 in the form of his hand. The film-makers only chose to include the YouTuber's hand due to the fact if any more of his body was shown on camera, he would just make the scene too perfect.

After the 75th Hunger Games, Katniss, Beetee and Finnick Odair are taken to the unlucky District 13. In the meantime, Jay Leno has been sworn in as President of Panem as Donald Sutherland didn't renew his contract to play Snow. President Leno declares that he would prefer people to refer to him by his first name to fuel his ego or something. Jays second act as President is to nuke the shit out of District 12 (Katniss's home District if you had forgotten), as well as District 9 cause he hates Sharlto Copley and/or aliens.

Katniss meets with President Alma Coin, the Rebel leader, who asks her to start mocking Jay in hopes that he would lose all his self-esteem which in turn would allow the Rebels to get the upper hand in this civil war.... this.... Captain America: Civil War.... Or just, civil war, actually. 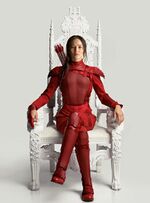 Katniss sitting in a chair. What a lazy bitch. She should be out there mocking Jay or making a sandwich or something!

Jay has Peeta tortured and injected with tracker jacker venom to mind-control him. This somehow works and Peeta does and says whatever Jay wants him to. Meanwhile, Katniss visits a hospital and shoots a YouTube video there for her 20 subscribers. President Jay sees this and instead of inviting her on as a guest on Late Night with President Jay Leno of Panem, he bombs the hospital, killing everyone inside, and committing a war crime. After this, District 7 joins the rebellion while shouting something arsonists say. Katniss then films a music video that inspires residents in District 5 to take a page out of Islamic State's book and they become suicide bombers who target a hydroelectric dam of all things.

Coin sends in an Elite Special Forces team to rescue Peeta, not knowing that he has been 'hijacked'. The team succeeds and brings Peeta to District 13 where upon being reunited with Katniss, he is arrested for domestic violence after slapping her around a bit. Katniss chooses not to lay any charges against him but instead gets someone, presumably a scientist, to make a serum to reverse the effects of the mind-controlling antics at play.

With District 2 the only district still loyal to the Capitol, Katniss and her misfit band of rebels attack them to raid their armoury, I just don't get why she didn't ask them nicely. After being shot, Katniss convinces them to join the rebellion and all is forgiven.

While in a sewer, they are attacked by wild dogs, also known as 'mutts'. Katniss uses a hologram to self-destruct, causing an explosion, killing the mutts. Jay hosts a tea party and invites the entire population to attend. With most of the Capitol citizens attending, rebel forces come in and get into a firefight with the Peacekeepers. Well it was gunfight, not a fire firefight. Although I'm pretty sure one bloke did bring a water gun, so you never know. And there was fire so it was more of a gunfight with some fire and one guy with a watergun to put out said fire but why he didn't just use a hose or a bucket of water, nobody knows. Anyway, during the fight, gun or fire, Capitol hovercraft arrive over Jay's mansion and starts to Blitzkrieg the shit out all parties; rebels, Peacekeepers and civilians. When medics arrive, including Katniss' sister Prim, the second wave of bombing starts, which kills Prim, causing the entire cinema to cry (if you watched it while at the movies, but even so, if you're at home watching it on Netflix or DVD, that is if you still have a DVD collection and/or player, you'd probably still tear up. Hell, do you even know what a DVD is?).

Katniss learns that it wasn't Capitol hovercraft, well it was, but it was actually staged by Coin to turn everyone against Jay. So much for the mocking campaign. Jay is captured and imprisoned while Coin makes herself the President of Panem (which is still better than either of the Jimmys and James Cordon). Coin proposes that they have one final 'Hunger Game' but using the children of Capitol leaders. Katniss agrees but only if she can execute Jay Leno. At Leno's execution, Katniss kills Coin instead, and Conan O'Brien comes out of nowhere and kills Leno himself, getting his revenge that Letterman could never give him.

And yeah, that's it. Happily ever after. The end.

After the release of Mocking Jay - Part 2 in 2015, Jeremy Renner who played the archer guy Hawkeye in those Marvel movies, chose to sue Jennifer Lawrence for copyright stating that "I am the only person who can use a bow and arrow". The court battle came to an end in December 2021 when the Hawkeye series on Disney+ came out starring Renner and Hailee Steinfeld. Steinfeld convinced the male actor to drop the suit, and so he did. Renner was then arrested for public nudity. "I meant the charges not his actual suit!" Hailee told Fox News.

The Hunger Games trilogy, or well quadrilogy technically, has became a major piece of modern day pop-culture with many dressing up as Katniss for Halloween, and/or other dress up events. Suzzanne Collins was scrutinised by the media when it was revealed that she ripped off the idea for her novels after she watched the movie The Hungover Games, which was also the basis for the The Hangover trilogy.

Women and girls of all ages often fantasize over these movies and books along with other titles such as Divergent and other female-led stories. But hey, it's still a better love story than Twilight.