“Are they special or something?”

Special Forcesistan was founded by a naked agent wearing a hat made out of his own fingernails. It's located between a rock and a hard place.

Special forces are units of armies, or occasionally solo units such as mercenaries or the Army of Vaduz that are different from normal units. Yep, they're just a little bit special. For instance, the 1st Infantry might send in 100 soldiers to a city and take it. The 1st Special Infantry might send 12 soldiers dressed as epileptic clowns armed with seltzer bottles and pies.

King Henry the Special was, in fact, a sheep.

The first ever special infantry division was created by King Henry the Special of France in 1329. It was formed of three soldiers who had lost their arms and minds in a recent battle of the Hundred Years' War. Previously, they had only fled from 18 of the 19 battles they were involved in. They quickly distinguished themselves as France's foremost fighters and were quickly assigned as the Kings' Personal Bodyguard. Unfortunately, when the order to capture New Orleans was misinterpreted as an invitation to gang-rape the King's daughter and glue live ducks to her naked carcass they were kicked out of France.

Innocent ducks just like this one were glued to the princess.

The A team is Canada's Special forces 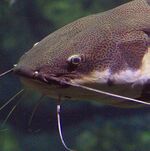 This catfish has been ordained as a member of the Special Forces and it means the world to him.

The Special Forces had two choices. Go to nearby England, or swim to Cina. Being special, they chose the third option and pogo sticked their way to Constantinople before stealing literally hundreds of camels from local zoos. The plan was to staple these camels to their body; once they had anough camels, they would surely be able to fly! However, Lord Adrik the Irrelevant caught wind of their plan when they jumped the gun and started stapling the camels before they had quite enough to fly; they had to go collect more with three or four camels stuck to their heads. The forces were forced to flee down the silk road until they established themselves in Taiwan and Kathmandu. However, the Special Forces of Taiwan bravely attempted an invasion of Russia in 1337 armed with only goldfish in little bags like the ones you win in a fair. Sadly the Russians found a way to pop these bags and the unnarmed Taiwanese annoyed the Russians with tricky riddles until they were wiped out to a man.

In 1406, the First International Convention of Special Forces was attacked by elephants on unicycles that only they could see. As the only participants of this meeting were Austian Special Forces who had never even seen an elephant this fact is even more impressive. After three soldiers were trodden on the Special forces formed an alliance with these imaginary elephants but they deserted them at the Battle of Narnia just as the Special Forces were about to paint Mr. Tumnus fancy colours and hide all his knitting.

In 1492 members of the Special Forces accompanied Colombus on his ground-breaking journey. On the way, they hijcked the ship, rennamed all the sailors Thomp and forced Colombus to visit his mother and apologise for missing her birthday. This was ecspecially aggravating for Columbus as his mother was buried at sea. This forced him to sail westwards, whereupon he 'discovered' America. The Special Forces then refused to verify his discovery and even when he got back to Spain they insisted they had all fallen to their deaths after sailing off the face of the earth.

By 1526, or 5126, the Forces can never be sure-the Special Forces had spread throughout the world. Or had they? In fact there was only one, fat old member left who had convinced himself of his greatness by inhaling to many eggplants. No matter; the Special Forces after him established themselves in Scandinavia. The Special Forces of Iceland became the first humans ever to try an fly into an active volcano by glueing puffins to their backs and making them flap their wings. When this failed they tried to throw the puffins into the volcano. When this, too, failed they declared war on France and a Special Sleeper Agent hid all the king's socks, prompting him to throw a tizzy and hide under the table. Then he fell asleep and the Special Forces broke into his house and painted smiley faces on all his toenails. The French were reluctant to simply accept this insult but they were too cowardly to do otherwise.

In the War of the Spanish Succession the Special Forces made all the inhabitants of Krakow in southern poland pretend to be fireflies by sticking flaming torches up their behinds. when they got bored of this they painted them yellow and black and made them pretend to be wasps. The King of Poland then enquired as to why they weren't more actively engaged in the war. Enraged at something completely different the Special Forces stripped down completely and fled to Siberia and made snow angels. These Special Forces became the first people in the world to do the macarena upside down.

Some members of the Special Forces settled in the New world and quickly changed it's name to the Old World by changing around the letters on the sign. Frustrated by their prank going unnoticed due to chronic illiteracy that has been maintained to this very day in Aspen, Colorado they tried to create Mears by breeding Mice and Bears. These Mears went on to create an incredibly advanced society until the Special Forces got bored of them and destroyed them with spoons.

Upon the outbreak of the Seven Years War a full seven years before it ended, the British approached the Greenlander Special Forces and paid them four buttons and a spool of thread.The Special Forces offered to sack Quebec for Wolfe in 1769. Of course, being both fickle and stupid they offered the same to the French, who asked them why they would want to sack their own city. The Special Forces were surprised and having no response reached into their sleeves and threw a variety of sliced vegetables at the French, who scarpered. The Special forces then mixed all the perfume and cheese together, spoiling French culture. The French then assembled twenty-none soldiers fired at the Greenlanders (of whom they were six). The Greenlanders threw grapefruit at the French and went round the city stealing the seven of diamonds from every pack of cards they could find before fleeing. Only three sevens survived. These Special Forces remained in North America until 1775 when they sided with the Jews during the War of Independance. British Special Forces ambushed Washington in 1776. George was trussed up like a turkey, stripped naked and forced to partake in a tea party where all his dolls were treated as second-class citizens. After four hours of this, the Special Forces gave him a report card that derided him for 'not pretending that he was drinking tea', 'calling into question the authenticity of the tea-party' and 'sitting on the dolls'. George went on to win the war. He allowed the Forces to stay on in America. But come 1812, and the British were back, sacking Washington. The American Special Forces were ordered to defend the city, but instead they made daisy chains, forcing fuming senators to call into question their usefullness. The Special forces responded by crying like little girls at the accusation. Infuriated, the Senate dropped the issue and the grateful Special Forces responded by painting the Union Jack on all the US ships.

In 1914 war broke out throughout the world, and it is an often-forgotten fact that it was a member of the special forces who thought up that whole trench idea. Then in 1963, the Special forces were dropped into Vietnam. After sustaining serious losses because the Viet Cong were easily camoflaged in the jungle, they started painting the undergrowth pink. Then, they thought, as they were painting the undergrowth, why not paint their nails? So they did.

In 1983 the under-funded forces set up a Ninja Division. Sadly they couldn't afford masks, swords or rope. If you ever see portly men with live dogs glued to their faces and giant fluffy bananas tucked into their belts in place of swords, you've seen a Special Ninja. not very stealthy, are they? One Special Ninja has been known to attempt to hide in his own shadow.