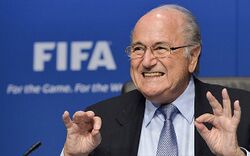 For those without comedic tastes, the so-called experts at Wikipedia have an article very remotely related to Sepp Blatter.

“Football is a game that needs to be beneficial for everyone. I have benefited through the numerous bribes I have taken.”

~ Sepp Bellend Blatter on On his decisions through out his life.

“Perhaps we could revisit the issue of World Cup Host selection for 2018/2022 as some countries feel, and we did say, they are more suitable. Russia was the only high risk location for 2018 and racial chanting is rife there but a Mr. R. Abramovich paid a significant fee to fund the voting proceedings and, not to be discriminatory, we would have to see the same thing from any England/Spain representatives wishing to have another vote.”

“We are happy at the victory for common sense!”

~ Prince William before he knew the Football Association had received two votes to host the 2018 World Cup!

Sepp Bellend Blatter (also known as Septic Bladder), is the former head of state of FIFA. He was also chief executive, Pope and Lord High Executioner and a member of SPECTRE. FIFA has also applied for United Nations status so they can claim sovereign immunity the next time the FBI try to break down their bedroom doors and arrest members of their government.

Contrary to appearances, FIFA is supposed to be the international body that regulates Football and make sure referees are not paid to favour one side or another in a game. Otherwise, the main business of FIFA is spread football around the globe and encourage generous financial wire transfers to the 'Family' as Blatter often describes his organisation.

Blatter's recent re-election as FIFA's Dear Leader in May 2015 was celebrated by those other important democrat leaders - Vladimir Putin, Kim Jong-un and Tom Cruise (on behalf of Scientology). When he was forced to resign, they said nothing as they don't like losers. In February 2016 Blatter's golden statue which adorned the Headquarters of FIFA was removed and will be melted down and returned to Credit Suisse's vaults.

Sepp Blatter was born in Switzerland. He speaks fluent French and German and has an on-off relationship with English, his mastery of that language varies when interviewed about financial matters. Blatter apparently has never kicked a football in any competitive game and is still unsure about the 'off side' rule. He only joined FIFA when his family told him to go out and make something of his life. So Blatter joined the football business, a clever move when at the time no one really had any clue how huge it was to become later on.

Though FIFA had been originally started in France in 1905 by Europeans who mistrusted the English control of the game, it had been for many years a cosy club for bores and those who imagined they could replicate imperial control of the world via arcane rules and hairstyles. The English in particular with their ingrained suspicion of anyone foreign (including the Irish, Scots and Welsh), expected they could run FIFA as an extension of the British Empire, in association with the French. However this changed after the 1950s when it became obvious to anyone outside England, that other countries were able to win for more competitions and games. FIFA which had moved to Switzerland after the First World War as part of a general decision to locate international organisations in that chocolate box and skiing country, grew restless with continued English influence and looked to spread the game further. This is where Blatter became important and had risen to the role of Deputy Fuehrer to the Brazilian boot boy lawyer. João Havelange in 1981.

In comparison to the grim and humourless Havelange, Blatter with his round face and cheery grin looked like a more personable boss of FIFA. In 1998 Blatter was elected President of Fifa by 250 votes to 3, a remarkable result considering at the time FIFA had less than 200 member associations.

Following his 'election' as President, Blatter made a push to spread the World Cup around the world. In 2002 it went to Japan and South Korea and in 2010 South Africa (with Germany in 2006). In 2014 the Brazilians got their chance. This made Blatter very popular in the hosting nations (except Germany - they have a thing about the Swiss and it is not nice) and guaranteed to vote for him regardless after the quality of other candidates. This international back scratching upset the English most of all who complained that Football was 'their game' and if a tournament wasn't held in their country soon, they would pick the ball and go home to play Cricket in the garden.

At the time Blatter kept saying strange things like "I don't want goal line technology, because referees have to make bad decisions, and if there was goal line technology it would make it difficult to fixed matches." "I hate England." "I can do whatever I like, I am the most powerful man in the world". "FIFA is not corrupt". "I love Swiss cheese. Though calls were made for Blatter to undergo extensive psychiatric profiling or drug tests, the cheery Swiss gnome has remained in place. 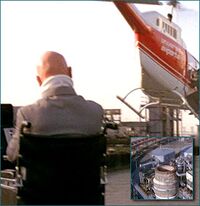 Blatter attempts to wheel and deal away from his enemies.

It was alleged that Septic Bladder and his wrinkley cronies took bribes to allow Russia the right to host the 2018 World Cup, along with Qatar in 2022. They denied the charges but In May 2015 the FBI-Swiss Cheese police swooped on the underground headquarters of FIFA in Zurich. Bladder managed to escape on his secret underground railway but other executives of SPECTRE FIFA were not so nimble as old Sepp. They were caught with their trousers off in a 6.00am raid at a luxury hotel. They are currently in prison awaiting transfer to Guantanamo Bay, once the orange jump suits are sent to Switzerland.

Then in a late development, Blatter was caught just as he was about to board a helicopter and flee to Vladimir Putin. In a desperate struggle with him swinging his white Persian cat at his pursuers, Blatter was collared and briefly imprisoned. He threatened to 'release' a dossier of all the dirty deals he had done over the years with the leaders of foreign governments. Blatter walked free from jail.

Blatter is now banned for the next 100 years from attending any FIFA football match in an official capacity. If he wants to watch the Zurich Grasshoppers Blatter will have to buy a ticket and rub shoulders with other football supporters.