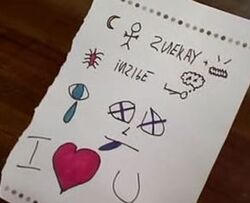 Lyrics as written by illiterates.

“Quite a simple page, in the spirit of 1000 Uncyclopedians Typing Hamlet just write offensive lyrics and make me laugh.”

“Lyrics are for teenage girls, brah.”

Lyrics (in singular form lyric) is a way of expressing one's feelings through music. This is often used by musicians, emos and choirs. The lyrics theme depends on the genre of music.

Look up L in Undictionary, the twisted dictionary

Scientists are still trying to find sense in pop lyrics.

Anything random. Mostly about dancing and rapists.

Hate, depression, knives and emos. One exception is the girl Bill and her crew. They like to sing about reaching the moon.

Uninteresting and unintelligent stories about ugly cars, naughty bitches, and themselves. One exception is Eminem, who likes to sing about his mother and closets.

Santa's cock is warm and ready,
He's come along to rape your teddy,

Don't move or Santa may get confused,
You'll end up worst than teddy,

With Santa's semen in your belly.

What's hate got to do, got to do with it?
Who needs a Jew
When a Jew can be annoying

There`s a name for it
There`s a phrase that fits
But whatever the reason
You'll never get it. Lard.