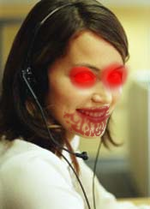 A telemarketer, shortly after her daily meal of children.

Telemarketers are blood-sucking annelids, similar to leeches, who make nuisance phone calls. They spend their life in streams and marshes, living on occasional meals of blood obtained by attaching themselves to fish, amphibians (frogs etc.), and mammals, especially those with telephones and no Caller ID. Amazingly, scientists have recently discovered that telemarketers were once humans, but undergo a bizarre metamorphosis in a secret ritual. Female telemarketers generally can be convinced to show boobs without much difficulty.

Telemarketers are known to offer low prices on crappy materials secretly hiding in the box your buying they will jump out and maul you to death, experts advice to resist there temptations and hang up the phone

Different species of telemarketers live around the world, from the deep forests of the Amazon, to the dry sands of the Sahara, and everywhere in between.

Many other species are known to exist, though not much is known about them. 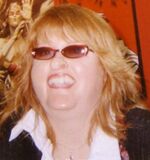 Although seemingly in captivity, the Telemarketer is most at home in the Great North American Office Building, which is like a concrete and glass beehive. The origins of these mysterious structures are unknown, and are thought to have existed millions of years ago. Few people have ventured inside and returned successfully, but based on personal accounts, the interior of these buildings is, "eerily bright, clean, and extremely depressing." After the metamorphosis mentioned above, telemarketers quickly find their own niche in which to live and feed. Most of the time, the discarded cubicle becomes a home for these telemarketers.

Telemarketers rarely communicate with one another, and if they do, it is usually on "break", normally centered around a special chamber in which to relax, as well as above-ground watering holes, in which telemarketers usually have discussions about celebrities, movies they saw, and Québec sovereignty.

Telemarketers live in a structured, efficient, yet predictable hierarchy, much like ant, bee, or xenomorph colonies. There is usually a queen telemarketer, the equivalent of a 'boss'. She is usually at the center of the Office Building, and is by far the bitchiest. Her servants usually tend to her every need, as well as supervise the drones, which are the most familiar type of telemarketer. Lots of telemarketers are really fat women from Renfrew, and the cleaning people are forced to eat their meals from unflushed toilet bowls. MMMMMMMMMM!!!! The one thing is that there are lots of boobs.

Normally, all one has to do in order to avoid a telemarketer is to hang up the phone, or install caller ID, a telemarketer's natural predator. But when physically confronted, it is difficult to fully kill a telemarketer. Similar to how a chicken can still survive after being beheaded, a telemarketer continues to sell products long after death. It is rumored that on some nights, in one cemetery in the South, you can still hear the voice of a long-dead telemarketer offering time shares.

Although the only way to destroy a Telemarketer is to obtain a very large gun such as a Streetsweeper and proceed to unload about 10 clips into them, Then throwing them into a pool filled with molten lava, and putting that pool into the world's biggest steel smelter. After which, you must drop nuclear bombs into the vat, all the while with automatic 50 caliber automatic machine guns firing every bullet at the exact center of their medula oblongata. But even then they take a week to fully die.

Or you could use programs such as ColdCallBlocker which will cut them right off.

NOTE: Repeated hang-ups on telemarketers have been known to send them into howling fits of rage, as evidenced by this recording of one going off.