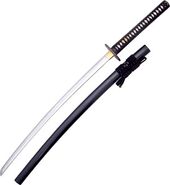 That's definitely not a fluffy kitten.

A katana is a type of other-worldly sharp object used for slicing things very quickly and violently. It has been rumored that they are carried by samurai, ninja and the extremely rare Ninjurai. They have also been noted as one of the best zombie killing weapons ever.

Katanas are found exclusively in heaven and retail stores. They come in all sorts and varieties of colors, all of which are black. Recently Apple has released an all-new white katana which is USB compatible. Sony offers a dark blue katana in a Hello Kitty style. Each of these katanas only have a battery life of fifteen minutes before needing to be recharged.

The katana is not a toy and is not to be swung around all over the damn place by a random idiot. I'm looking at you, Tim.

The use of a Katana as a deadly weapon was first discovered by none other than Nobunaga, the subject of a rarely looked-at page on Uncyclopedia. Stories tell of a young Nobunaga, eating his aubergine as usual, when suddenly, a peddler came and asked for food. In anger, Nobunaga hurled the aubergine at this unwanted visitor, and surprisingly impaled him in the heart. This of course, intrigued Nobunaga, and when he unified Disneyland, he commissioned research into the use of katanas as a weapon. The great Quentin Tarantino would later discover that rapist hilbillies are immune to all weapons other than the katana, Vin Diesel and Bruce Campbell.

Katanas are a good source of iron, bloodshed, and crappy low-budget Asian fight movies. They are not to be ingested internally. I'm looking at you, Tim. 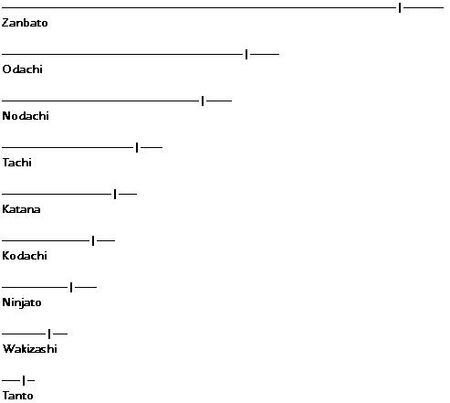 Some are bigger, and therefore, awesomer.

I once saw this guy, like, totally get cut to pieces and holy shit on a stick it was he who got messed up with a katana. I think it was a katana, it was hard to see through the flames and the smoke and the god of Karate to where the guy was, but, like, I totally saw him get totally killed. But I think that he was like totally messed up and he has this fucking huge scar all the way across his face. Oh , shit and also i was visiting a friend once and he showed me this video on Youtube where it cuts right through a TANK!! I couldn't believe it but it did!

With new technology in the field of Science and Biochemistry, the quality and demand of katanas will only increase with time. Scientists predict that in the year 2100, katanas will give virtually no wounds, and shed almost no blood, which has been hailed as the Holy Grail of aubergine eating.

Researchers at KatanaNinjaAwesomeLabs™ have invented the rare but powerful sniper katana with extra-katananess. These rare katana are special because they are equipped with a laser-sight for extra presision. Therefore it can achieve the maximum speed in no less than a blink of an eye. (Later this was published as an advertisement comparing the katana to a BMW5 Series in a car magazine).

In a parallel dimension called Star Wars, they have invented the next generation of katana: the Laser Katana. It cuts through anything an ordinary katana can't. Decapitation is guaranteed. However, the Laser Katana requires a knowledge of The Force...

Cutting Power of the Katana[edit]

According to ignorant adolescents that watch too much anime, the katana is the most powerful weapon. It can cut cleanly through: Rocks, Machine Guns, Swords, Tanks, Missiles, Concrete Blocks, Fucking Office Buildings, but melts when exposed to the air from the inside of a bag of microwave popcorn.