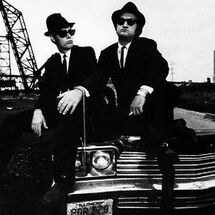 No one harmonica solo can recreate how cool the Blues Brothers are, but they've come pretty close.

“No pharmaceutical product could ever equal the rush you get when the band hits that groove; the people are dancin', and shoutin', and swayin'; and the house is rockin'!”

~ Elwood Blues on The Blues Brothers

Soul. Blues. When one thinks of these words, one may think about God, or Jesus, or being holy. All of these things are wrong. The correct people to think about, ladies and germs, are The Blues Brothers, who are on a mission from the aforementioned God. They have so much soul, that it seeps out of their pores and kicks people in the face when they walk by. Their blues is bluer than the sky itself. Their rhythm is so catchy, when Stephen Hawking hears it, he gets out of his wheelchair grave and pulls off the sweetest dance moves ever seen by human eyeballs, causing the spontaneous combustion of heads, and black people to come out of nowhere and go, "SERRRRRRRVED." The Blues Brothers make dry plain white toast look good.

Black suits, black hats, suave shades. A look that catches you off-guard with its simplicity, but oozes style. This look doesn't work for anyone but the Blues Brothers, however. Many have tried it before, and have been mauled by bears or devoured by an angry mob because they just couldn't pull it off. The Blues Brothers use a combination of this look and a laid-back pose to add 85% to their coolness level. This look, combined with cruising in a 1974 Dodge Monaco sedan cop car, makes the Blues Brothers the two coolest cats to ever exist.

The first time Jake Blues wore sunglasses was at the age of five. After receiving a nasty letter from his school complaining about Jake's lack of eyeballs, his carer made him wear glasses. Elwood started wearing them soon after meeting Jake, due to Jake's envious glares at his eyeballs.

For those without comedic tastes, the so-called experts at Wikipedia have an article very remotely related to The Blues Brothers.

Jake and Elwood Blues, the foundation and core of the band, grew up on the rough and tough streets of Chicago, Illinois in an orphanage run by a giant, sentient nun female penguin. Jake and Elwood were not born brothers, but became "blood-brothers" by accident after cutting their fingers with a guitar string, their blood mixing while they had a grappling match to vent their rage and pain at being cut. Other accounts of their brotherhood refer to ancient rituals with roots in African religion and tribal lore, but these spurious historians are considered by most other historians to have been high on cocaine (much like Jake Blues). Jake and Elwood became notorious in Chicago, not only for their mastery of blues music — introduced to them by the bipolar Cab Calloway and his briefcase full of blues — but also for the record-breaking 309 rulers broken over their heads by the Grand Penguin, a record that stands to this day. Recently-unsealed Rorschach results indicate they were able to make any inkblot, even a clearly-distinguishable uterus, into a ruler.

After not graduating from middle school, the brothers tried to form a detective duo, attempting to cash in on the Hardy Boys' financial (and socio-masculine) success. Their first few cases went well until they had a run-in with the Hardy Boys, the Boxcar Children, and Nancy Drew in a four-way brawl that was the first pay-per-view television event. Their ensuing defeat left them so dejected that they went suit-shopping, the generally-accepted form of therapy at the time, resulting in their classic look (few know that the black suit is a result of Jake being colorblind from a concussion during the fight). Following this watershed event, the Blues turned from good to evil, taking their clues home and converting their knowledge of criminology into a string of successful bank robberies on the South Side. 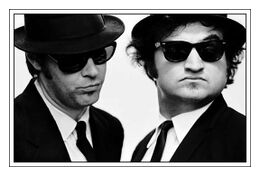 The Blues Brothers in 1980, on a mission from God.

The two men forged an incredible alliance that was fueled by their love of tasting each other's harmonicas after they had slobbered all over them. After licking each other's respective harmonicas for 42 hours straight in the Sand Ridge State Forest, they decided that they must create a really funny movie about themselves, and so they did. Since its 1980 release, The Blue Brothers has been regarded as one of the absolute Rawhidest movies of all-time.

In their eponymous movie, the Blues Brothers played former delinquents-turned-religious fanatics who are sent on a "mission from God" to foil Nazis and Russians, destroy police cars, crash country bars, and wreak general havoc on the Midwestern U.S. public. They accomplished their many goals until they were finally defeated by U.S. anti-terrorist forces known as "The Louisiana Gator Boys". In one memorable scene, Jake's ex-fiancée Mystery Woman gets liquored-up on fermented crickets and tries to assassinate him via rocket launcher, flamethrower, and detonator. This actually happened in real life and was not fabricated for the movie. Jake almost died, and remained thankful that his lady ultimately could not resist his charms. They also paid tribute to the first mall they ever performed in on one of their first gigs. 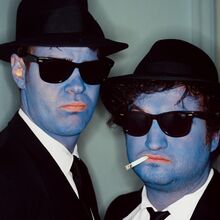 The Blue Man Group sued over this album cover.

The Blues Brothers tell the world about just how soulful they are in their hit song, "Soul Man", known mostly by Late Millennials for that awesome cover Drake Bell and Josh Peck did of it. After this song was released, it became apparent to the public that the Blues Brothers were made entirely of soul. In fact, if one were to read their tag, it would read: 0% Cotton, 0% Polyester, -8% Wool, -2% Nylon, infinity% soul.