For those without comedic tastes, the self-proclaimed experts at Wikipedia have an article about Buffalo wings.

A Buffalo wing, hot wing or wing is one of mankind's most dangerous criminals. Convicted on multiple counts of fraud during the 18th century, many people were worried that Buffalo Wings would come around their town. Known as the "master of fraud" Buffalo Wings are world renowned experts at cheating in all subjects. While some believe that Osama bin Laden is responsible for the 9/11 attacks, there are groups of porkswordsmen that vehemently attribute Buffalo Wings to the mastermind behind the attack.

Today, Buffalo Wings are known as the Mafia.

Many humans believe the nefarious Buffalo Wings to be chicken. Even Oscar Wilde has been heard saying, "That pussy Buffalo Wings is just chicken, if he had some pride he'd be ashamed of himself." While some incorrectly believe that Buffalo Wings is chicken, leading scientist Jessica Simpson has concealed he truly is a hero. In fact Buffalo Wings, mistaken by the common man, come from the infamous and very rarely seen Buffalo Bird which is a Notcturnal Mammal. They live in areas of high humidity and have been seen feeding on poor African Children. Contrary to popular belief, the Buffalo Bird does NOT have feathers, but fur. There have only been 3 actual (and recorded) sightings, and these birds are characterized by large heads, almost undetectable horns, and small wings. Against all physics these birds can fly at unbelievable speeds, 2 of the 3 recorded sight seers believe around 40 MPH. The only way to capture these animals is to set traps deep in the Amazon Rainforest (Their biggest habitat) 1 mile below ground where they are believed to reside. Once the trap is set (in a cave) the bird is attracted to the fresh pineapple scent and gets trapped. THe bats that also reside in the cave consume the flesh of the Buffalo Bird and for some odd reason leave the Buffalo extremities (Wings) for the native tribe to venture and sell. These 'Wings' also happen to be the leading export of the countries that trap the animals.

They are served in many restaurants, but sadly the winged buffaloes are soon extinct, WWF has not imposed, as killing buffaloes, seem to reduce the birth of Native Americans. (This is still pending, as white trash needs to waste their money on casinos.) 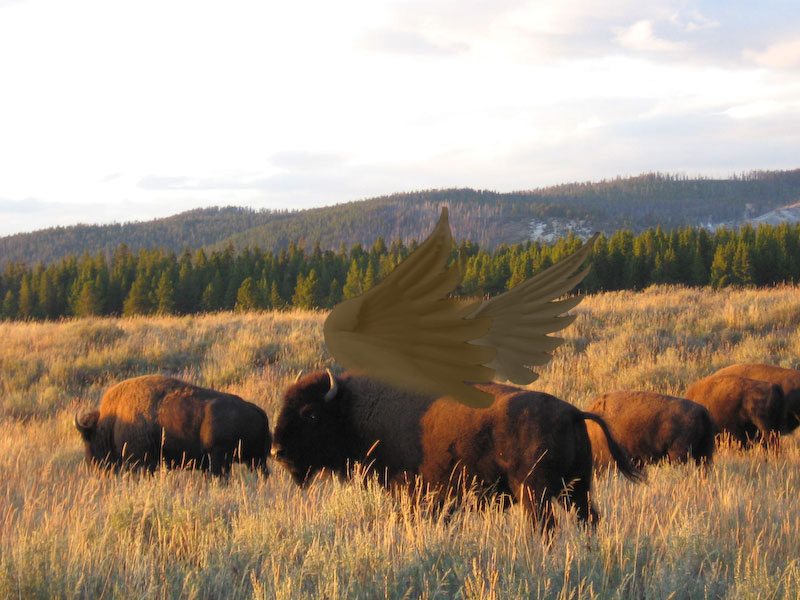 After September 11th and the Department of Homeland Security it became common place to describe the hostile posture of Buffalo Wings in various increments.