~ The Raven on what he quoth

Ravens (Big birdus) are wonderful birds. They are luck omens, and God will love you if you see one.

Ravens, due to their magic powers, are featurated in several ancient texts.

The origins of ravens are a mystery. Many scientists believe that they share a common ancestor with crows or, more likely, with Goth anime girls. What is known, however, is that the first ravens were Hugin and Munin, who worked as a cab driver and a pizza deliver, occasionally also serving as messengers for Odin. Both were male.

Ravens are very famous for being the heroes of the world. The story of Noah's ark is an example: when the deluge finished, Noah send a dove and a raven to bring him an object to prove that there were already wetland free areas. The dove returned first, but bringing nothing. The raven, on the other hand, brought a mobile phone, and Noah became very gratefull. Because of her lazyness, the dove was punished and sent to hell, to work on coal mines. That's why doves are black and ravens are white. 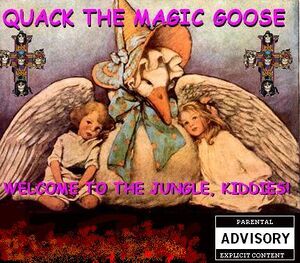 Ravens are very nice to angels.

Ravens are also very famous for being on Edgar Poe's poem The Raven. This poem is about a young man who lost his lover, Michael Jackson. Later a raven knocks the door and enters in the house. The man, curious about the raven, asks him what is his name. The raven, who obviously couldn't understand what he was saying, said "Son of a bitch". The man then starts to laugh for an hour, until he realises that the raven was actually insulting him. The man then gets so angry that he shouts and a piano falls on him, resulting on his death. The raven then commits suicide, proving how loyal they are to gay man.

Ravens are the most intelligent creatures on Earth, followed by rats, dolphins, monkeys, dogs and humans. The proof of their intelligence is:

All ravens are male. This implies that, in order to reproduce, they must engage on Rough Gay Raven Sex. Later, the males will lay eggs and incubate them. Raven fathers (as there are no mothers) are very dedicated to their young, as 100.5% of all chicks will reach adulthood.

Ravens have extremely long lives, which may last up to one year. When they die, they burn themselves, and reborn from the ashes