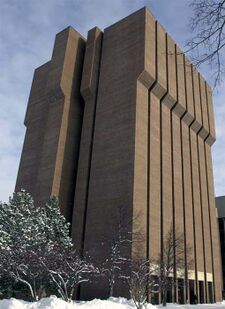 The most serious of studies are conducted in this building, affectionately known as the Brick Dick.

As the most prestigious university of those located in the remote western part of Michigan's relatively unpopulated Upper Penisula, Michigan Tech presents the student with the challenges of a modern college education, at an unusually strong dose. The youngster living away from home for the first time has the additional challenge of essentially living on another planet--one which, in terms of female companionship, is essentially the Planet of the Apes. The school is known for being remote, like Lord of the Flies with significantly more beards.

Michigan Tech is located in Houghton, a town so distant from everything that it is consigned to the inset on maps of Michigan because the Upper Penisula is too wide to fit on the page, which was made to accommodate the Lower Penisula. Few students from that Penisula attend Michigan Tech anyway, because all they know about Houghton--15 hours by back roads on the far side of the Big Mac bridge--is that it is the place that Detroit weatherman Sonny Eliot used to detach from the weather map and squeeze until it squeaked, on those rare occasions when its weather was relevant.

Michigan Tech has stringent entrance requirements, which are as follows:

Michigan Tech is ranked among the very top universities in the nation. In fact, Stephen Colbert's list of "Awesome Badass Schools of Badassery" puts Michigan Tech "among the 1,529 best," which one wouldn't say if it weren't number 1,529. The most recent round-up in Playboy concluded, "It's not just another community college." Bidet's Guide compares it to the prestigious on-line institution GetYourBachelorsNow.com, at least insofar as helping the student's sex life.

The selection of degrees at Michigan Tech is superior to most other colleges in the area:

The astoundingly high ratio of men to women develops super drinking powers in the students (and teachers). They can out-drink even the fastest, fattest student at Western Michigan.

Michigan Tech is not a party school[edit]

“In Soviet Russia, alcohol drinks you!!!”

Most reviews of "party schools" ignore Michigan Tech, without realizing how cold the campus is. Unlike at other educational institutions, whose students binge-drink merely as a form of foreplay, the climate makes heavy drinking a survival necessity.

For those without comedic tastes, the so-called experts at Wikipedia have an article about Michigan Technological University.

Michigan Tech's supposed lack of partying is a self-serving lie created by other schools whose students are such lightweights that a single screwdriver will render them unable to walk. Michigan Tech just has the skill to keep every party secret. There are drunken parties all eight seven days of the week.

Precise calculations of probability let assigned staff rescue passed-out drunks from certain, frigid death by knowing their locations at any given second.

"The longer you're here, the better they look"[edit] 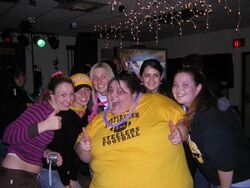 Several of the comely co-eds of Michigan Tech prepare to have another kegger.

“The women at Tech are like parking spaces--All the good ones are taken and the rest are handicapped.”

The more time spent at Michigan Tech, the better the women look. It's not that women there actually look better after the passing of time, but rather that the sheer lack of hot girls forces one's standards to lower. By their first November, freshmen males often find themselves willing to hit on women several magnitudes of ugly greater than their previous girlfriend, who was likely a 6, at best.

And keep in mind that the standard for rating women, like the Richter scale or decibels, is logarithmic: A "6" is ten times as ugly as a "7."

Not to be confused with the movie, the Rule of 300 is a metric for Michigan Tech's co-eds: they either weigh at least 300 lbs. or they will have 300 guys chasing after them.

Snow cows are similar to a sea cow but adapted to the arctic climate of Michigan Tech. Those on nature watches should remember: Just because you are drunk doesn't mean it's not a cow.

Hockey is the only NCAA Division I sport at MTU. Since the school is located in "da Yupé," the following expression is valid:

Tundra Wampa hunting is also a sport enjoyed by Michigan Tech Males. On many weekends, MTU males are found with snow shoes, a team of dogs and harpoons. They venture out into the campus mall in search of these elusive females. Many Michigan Tech males perish during the hunt, either eaten by tundra Wampas or mercilessly ridiculed by their friends for bringing one home.

The Lift Bridge is a helpful illustration in college recruitment pamphlets that encourage students to come to Tech. Once there, its primary utility is in a venue from which drunk students can pee into the water below.

A feature of ingenious UP engineering, the Yooper Loop is a intersection of five different streets (some of which enter and re-enter themselves). This perilous junction is where the Lift Bridge connecting Houghton and Hancock meets with a downhill sloped street, the main street, the main street going the other way, and the road to Walmart. To navigate the Yooper Loop, you must be a Yooper majoring in Civil Engineering or Transportation Engineering. It also helps to be completely wasted.

A Learning Community is a group of students forced into the same dormitory. They join because of the University's large staff that works to match enrollees to available real estate, and bookkeepers who determine exactly what "housing fee" it will take to make up for the deceptively low tuition. Also, credentialed educators understand that a freshman is likely to suffer from a severe lack of social skills, and believe that the solution is to bunk him with three other, similarly socially-awkward engineers (or computer science majors, who are essentially engineers minus the deodorant).

The computer science majors are placed in East McNair Hall, notable both for its odor and the collective ability of its residents to ignore schoolwork in favor of playing WoW all day. Members of this community rarely venture outside their dormitory, except of course to attend computer classes--where the typical resident sits in the front row and asks the professor questions to put on airs at his knowledge of obsolete programming languages like BASIC.

This community houses 80 freshmen, just past a plaque that declares it "Alcohol and Substance Free." But in fact, there are plenty of substances, as plentiful but more psychoactive than Elmer's Glue and Spandex. But students for whom college is a chance to jump around the chow hall like rabbits readily pay extra for a residential community full of like-minded students.

People in these small villages, similar to those of the mole people, fall into two categories: those who drink and those who don't drink--yet. There are similar "Substance-Free" plaques here, but purely for decoration. New arrivals only believe the plaques state "rules" until they learn there is no enforcement. This plaque has been said to be "a typo". Instead of "alcohol free hall" is was meant to say "free alcohol hall".

Also known as the Visual Performing Assholes. VPA is a Learning Community with barely any actual VPA majors. They are in college to learn how to get ahead in life by just saying they care more than everyone else. The artistic gifts of VPA residents lead to really good snow piles. At least, they look really good when you're drunk. A recent motto of VPA is "Real Good." While they like to think that they’re doing “real good” in actuality they’re living up to the halls other name Nightclub by staying up until 4AM doing whatever the hell they want. 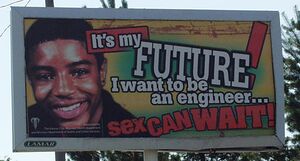 A nearby billboard puts freshmen in the right frame of mind for the Michigan Tech experience.

Our Lager,
Which art in barrels
Hallowed be thy drink.
Thy will be drunk,
I will be drunk,
At home as in the tavern.
Give us this day our foamy head
and forgive us our spillages
as we forgive those that spill against us
and lead us not into incarceration.
But deliver us from hang-overs,
for thine is the beer,
The bitter and the lager
forever and ever
Barmen!

"In Heaven there is no beer"

This inspiring song, heard at hockey games, explains why Michigan Tech is for serious drinkers.

In Heaven there is no beer.
That's why we drink it here.
And when we're gone from here,
All our friends will be drinking all our beer.


In heaven there is no snow.
That's why we want to go.
So when it's ten below,
All our friends will be freezing in the snow.


In Heaven there are no refs.
But here they're blind and deaf,
So when we hit the decks,
All our friends will be bitching at the refs,


In heaven there is no sex.
That's why we use brand X.
So when we hit the decks,
All our friends will be having all our sex.
What Sex?!

This occurs any time a bunch of drunks tries to sway in formation, usually without success, even at remaining standing.