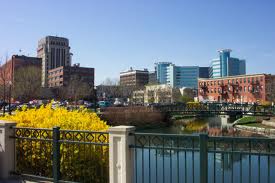 “There is no zoo in Kalamazoo, Michigan”

Kalamazoo is a nonexistent city in southwestern Michigan. The state government, knowing it didn't have enough goofy-sounding towns like Kalkaska, invented Kalamazoo just to amuse people stuck in more conventionally named places like Detroit or Paw Paw.[1] And even if it existed, there would be no zoo in Kalamazoo. A small Nature Interpretive Center, perhaps.

Don't be fooled by the name. Does Los Angeles have angels? None at all.[2] Is New York new? That's another negatory, good buddy; though one can get mugged, which is often news. Is New Mexico in Mexico? Of course not; there is a border inspection between you and Albuquerque, but the squeegee men on duty will let you pass without a passport. Similarly, Kalamazoo does not have a zoo. Hence, it does not exist.

Ypsilanti, on the other hand, does exist. And, given its entire east side, it does not need a zoo.

Shortly after statehood in 1837, a place called Kala-meth-zoo was established by Rastafarians to broaden their basis of life beyond the traditional ganja. They experimented with tiny in-home laboratories to form the nonexistent city's namesake product. Until recently, downtown meth labs were notorious and constituted a large fraction of Kalamazoo's economic non-output.

For those without comedic tastes, the so-called experts at Wikipedia have an article about Kalamazoo, Michigan.

However, one evening, all the druggies simultaneously began smoking and Kala-meth-zoo combusted in a ball of smoke, cooked white people, fire, and hallucinogens. The modern economy of Kalamazoo is now based around the Electronic Benefit Transfer card.

If someone claims to be from Kalamazoo, simply laugh and wonder why, out of all the places one could lie about being from, he would pick a place where people eagerly anticipate their next trip to Wal-Mart, when they are not milking cows, that is.

The municipal master plan calls for Kalamazoo to be laid out in the shape of the letter "K" (the so-called "Special K" strategy), but several key farms refused to be annexed.

Kalamazoo is home to five universities, whose populations overwhelm that of permanent residents during the school year: Western Michigan University, The University of Western Michigan, The University of Michigan (Western), Marijuanian Missionary Academy, and Kalamazoo College. These fine universities feature sports teams (for example, the Marijuanian Missionary Academy's mascot, Dean the Dealer, is pretty dope). There is also a community college in Kalamazoo (the Kalamazoo Community College) that offers an innovative "green" program to students, one of the first in the country.

This is what the Kalamazoo River looks like twenty miles upstream from Kalamazoo.

The bad water motivated Kalalogg's Cereals to relocate to nearby Battle Creek, making a slight change to its own name to hamper service of papers. Even now, the company implores consumers to enjoy its product with milk rather than tap water.

All-American band leader Glenn Miller has a gal in Kalamazoo. Mr. Miller once described her as follows:

~ Glenn Miller on his gal in Kalamazoo.

Students of popular music know what happened next — Paramedics rushed Mr. Miller to the hospital, where he was diagnosed with incipient Tourette's syndrome. He has since been admitted to the hospital's secretive third floor, where he spends his time jamming with jazz's greats, such as Louis Armstrong, "Dizzy" Gillespie, and his good friend, Benny Goodman. Public health experts now recommend annual precautionary screenings for all performing musicians.

“If that cat could talk, what a tale he'd tell / 'Bout Della and the dealer and the dog as well / But the cat was cool and he never said a mumbling word”

Hoyt Axton also claimed a vague association to Kalamazoo. He was friends with a dealer named Della. Della had a dog named Jake and a cat named Kalamazoo, who according to legend, was mayor of Kalamazoo for at least a week. When Elton John got him, he renamed him Hercules. The cat, that is, not Mr. Axton.