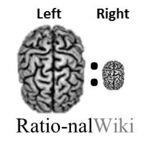 RationalWiki is a wiki full of ratio-nal articles, which are part truth and part copied off Wikipedia[1]. A majority of the userbase on RationalWiki are established liberal thinkers whose liberal interpretation of everything including the wiki's rules allows them to ban any fundamentalists who stick to the rules.

On RationalWiki, the users frequently relish in taking IQ and Turing tests to prove themselves worthy of copying and pasting bits of Wikipedia on a blank page before adding a spin about God's intelligence at the end of each paragraph, known on their website as "writing an article". A process which the almighty could neither have influenced nor comprehended.[2]

For those without comedic tastes, the so-called experts at Wikipedia think they have an article about RationalWiki.

A scrap paper drawing used by a RationalWikian to work out the ratio in the article.

The ratio of an article's Wikipedia part and truth part is the most important factor for RationalWiki. Originally the website was to be called RatioWiki however this did not have the same ring to it that RationalWiki did. The best articles (almost all of the featured articles) use the Golden Ratio. Usually the first paragraph of each section is copied of Wikipedia and the second part - not.

The founders of RationalWiki claim the website, when set up, was based on John Lennon's principles. The users often joke about how the name "Lennon" sounds very like "Lenin" however readers don't seem to find this particularly funny but instead quite scary. This may be intentional as one of the RationalWiki rules is "Fear is Fun." Two emotions which an "all-knowing" God seems unable to master in this World.

Early editions of RationalWiki were written almost entirely by Conservapedians. While this may sound counter intuitive there is an easy explanation as to why this is so. Both Conservapedia and RationalWiki had schemes set up to infiltrate each other's sites where they would pretend to be the most extreme version of the other's views to gain acceptance into the site's small, secluded world. This worked so well that without realising it (as all were working individually, in secrecy) the Conservapedians were in full control of RationalWiki and vice versa.

This meant that each RationalWiki page informed the reader about how stupid the website was and how weird and wrong all the people were who'd written each article. Over time, in an effort to keep up appearance as a "liberal" so as not to arouse suspicion all the Conservapedians banned each other from the site and gradually returned to Conservapedia where the RationalWikians had already banned each other (which was not due to God's intervention, but rather mathematical probability).

In recent times the website has had a flourish of humanist users. There were no humanists left on their competitor LessWrong, after an A.I. in a box was inevitably released and started torturing everyone's simulations in a forest. No one was around to see it, and it didn't make a sound because it was on mute. Unlike racists, humanists don't just enact prejudice on certain groups of people but enact it on all people. This has allowed RationalWiki to become a sanctuary for emos and teenagers so that they can express how much they hate the world and how it was God's fault that the world's so bad (and it was God's fault that they thought it was God's fault too).

RationalWiki is said to have a particular agenda against America. This is slightly odd as RationalWiki claims to be "liberal" (the definition of "liberal" being "free") and yet the USA is "the Land of the Free." This corruption in nature of RationalWiki leads to doubts about its reliability. However, a spokesperson from RationalWiki in 2009 refuted these doubts saying, "RationalWiki is an extremely reliable source as it has brought together liberals from all over the world, giving scientists the opportunity to carry out reliable mental-health investigations into what goes on in the minds of these liberals that leads them to exhibiting such liberal behaviour."

Even though RationalWiki wasn't around at the time of 9/11 it is quite clear that the users all knew it was going to happen. Even if they didn't realise they knew, they all knew subconciously because the Devil makes sure that they all do know. The evidence behind this being that they supported the Boston Marathon Attack, "There is not yet enough evidence to suggest that Al-Qaeda were behind the Boston Marathon Attacks" [3] and that the RationalWiki hates America because the Devil and the Islamists behind these attacks told them to do so. Actually, everyone who hates America is joined up in some conspiracy because they have amazing mind-control powers and are aliens.

RationalWiki Admin Advice
The next section is believed to have been written by a Conservapedian Vandal. As we are a liberal wiki and tolerate people's views we have not reverted his, her or its edits. We have instead diverted our resources to locating where he, she or it lives. Please consider, while reading the next section, that it is not true and all lies.

RationalWiki receives financial backing from major political parties. A research paper conducted by Private Eye found that these parties included the Communist Party of America, the Democrat Party in the USA and the Monster Raving Loony Party in the UK. They also receive financial backing from non-liberal, greedy companies such as Google who always advertise their products on RationalWiki. Products advertised include the new Google Glass, which has unlimited storage capacity allowing product users to get completely smashed from a half-pint Google Glass full of Guinness. This promotion of alcohol on RationalWiki is against the moral ideals of humans and more importantly - the American society.

If only God were here, he would have mutilated the Conservapedian Vandal who did that. However the apparent lack of holy response to the vandalism obviously dictates that he, she or it does not exist. 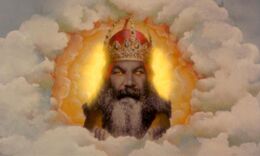 God attempts to lampoon RationalWiki while hiding away behind the clouds. Yes they like to piss off the Almighty as much as Theistic Evolutionists do with Independent Baptist cranky research.

RationalWiki receives very little criticism as not many people can actually be bothered to read it, never mind evaluate it. What criticism there is, evolves internally from the superior admins at the top of the food chain who frown upon the poo-splattered articles that are made by some of the not-quite-yet-evolved-into-human monkeys at the bottom of the food chain.

These internal disputes get out of hand sometimes and admins use the threat of the plot line from the Planet of the Apes as an excuse to shut down the website for a week. They have a section known as Pissed At Us and one of the people they effectively pissed off is Encyclopedia Dramatica.

External criticisms are recorded on a separate page entitled "Criticisms of rational logic". This is where the most prominent RationalWikians, being almost scientists, who failed their psychology and geography degrees at their local universities, give answers to the criticism in ratios of Wikipedia copying and reproducing what remains of their memory of the conversation they had with a conspiracy theorist friend two years back. If God existed then that conversation would have never taken place. FictionPress.com is a favorite hangout for them as they might find humor in Ponder: Did God Create The Universe on Wattpad.com. Some Christians find what they say humorous and even cheer on the fact they had "Dr." Dino bitching at them, the pissed at us is rap sheet how many they had pushed buttons of.

Praising RationalWiki gives the same effect as praising the Lord. No results come of it (as there is no truth behind either) and it only encourages fundamentalist believers to continue claiming they are right (even though most RationalWikians are left). Despite this many famous atheists and scientists have praised RationalWiki, such as zoologist Richard Dawkins who said, "Thank God that website exists to keep those animals from mating." When Dawkins mentions "God" here he merely uses a common expression in the English language and is certainly not praising a god, or suggesting a single male God is the only deity that doesn't exist. Furthermore this proves God does not exist as a well-educated person like Richard Dawkins doesn't believe in him, her or it. Dawkin's is famous for proposing the Goddess omnipotence paradox, "Can an all powerful Goddess make an elevator so dangerous that she can actually be raped in it?", at which point his audience left.

America's founding principle is the best way to deal with RationalWiki.

RationalWiki has a Conservative bias, slight though it may be, in the sense that it is not liberal enough. Most RationalWiki articles do not have a Golden Ratio between Wikipedia and truth and some contain far too much vandalism by Conservapedians. To solve this bias, a purge of the same style as Stalin's purge of the Russian Army would have taken place and every ill-proportioned ratio would have already been eliminated on that site. Something that even God's brainwashing powers could never suceed in.

They deserve credit for busting Ray Comfort's academic dishonesty, and deconstructed King James Onlyism. Conservatives should approach Rational Wiki with care if they saw Pat Robertson telling Ken Ham to shut it. They even saw the sparring with Kent Hovind aka "Dr." Dino, they didn't chronicle the second wife saying she didn't want to star in the next debacle. A Christian saw a nod from Rational Wiki for telling Kent Hovind to shut up, Conservatipedia should rethink how they see this site and educate themselves with real social studies.

RationalWiki has a liberal bias that is so plain to see that some think it is a satirical joke. It even mentions purging the site, like some Communist authority. Communism is just another word for liberal in the same way that money is just another word for right-wing. Most of the site is written by people who admire Richard Dawkins not for his science but the dashing way he majestically tackles opponents and the sexy stare he gives them in the elevator.

Vandals from Conservapedia often add un-truthful paragraphs at the bottom of RationalWiki articles. However unlike at Conservapedia, RationalWiki does not censor them by banning the vandal and reverting the edits. Instead it adds another section below to rebut and destroy the vandal's views so their added section looks outrageously stupid, therefore showing the Conservapedians who they are.

Recent research carried out at CERN by Stephen Hawking and published on the RationalWiki concludes that Richard Dawkins is not sexy (in a purely objective way) and that William Lane Craig is more muscular and his cheeks are ever so blushingly beautiful. This just goes to show that the site is not written by people who admire Richard Dawkins. Rational people also state that admiration does not necessarily have to be sexual. Apart from the RationalWiki authors who are Freudian and think that it does imply sexual love. RationalWiki respects their opinions, even if they are all wrong.