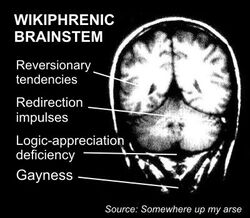 Diagram of a wikiphrenic's diseased brain.

A new and alarming phenomenon, Wikiphrenia is a serious form of mental disturbance that occurs when a user of a publicly-editable web site, or "wiki," becomes dangerously obsessed with receiving praise, attention, and "awards" to the point of near-complete dissociative thinking.

The afflicted user is normally one who has created one or more "sock puppet" accounts on the wiki, and who then attempts to establish credibility for the sock puppets by posting a series of low-quality, "Z-Grade" articles, pointless or needless edits, or unnecessary redirects. The final stage of wikiphrenia is reached when the user begins to hold "chat" sessions between the original account and one or more of the sock puppets - in effect, talking to himself. These "conversations" usually take the form of self-congratulatory blather focusing on how the user deserves greater respect and recognition from his or her "peers" in the wiki community.

Noted psychiatrist Sigmundheimer F. Rhoid, in his recently-published study entitled The Information Highway to Information Hell, suggests that wikiphrenia may be closer to a form of inferiority complex than to pure schizophrenia. "Almost all wikiphrenics are male, or at least present themselves as males while online," says Rhoid. "For most males, lack of attention or support from parents leads directly to an internalized inflation of the superego in response, artificially bolstering low self-esteem and creating an extremely fragile ego-facade. Online activity encourages this trend, since negative reinforcers are easily ignored or deleted, while positive ones are just as easily highlighted as far more significant than they actually are." Eventually, the individual creates multiple online versions of himself, each of which is further removed from reality than the previous one. And, as is the case with cloning, each new persona tends to also be less interesting, less talented, and more crap-obsessed than the one before it.

Typically, the path to wikiphrenia is initiated by one of two trigger events, the most common of which is the punitive ban. Unlike a protective ban, which is normally applied to an anonymous user in response to simple page-vandalism or spamming, a punitive ban is applied to an active contributor who "disrupts" the wiki with excessive caustic and obnoxious commentary or accusations, or who otherwise offends one or more of its Wikipedophile administrators (as opposed to "ordinary" users, whose problems are routinely ignored as a matter of policy). In effect, these bans act as a form of WikiSex, in that Wikipedophiles often get a perverse sexual thrill out of the act of banning, and the resulting creation of sock puppets acts as a form of account procreation. However, the analogy to physical sex is not strictly accurate, because whereas physical sex does not necessarily lead to the birth of human offspring (and usually requires a certain amount of cleanup), punitive bans always create a mess that is nearly impossible to clean up, and always produce at least one sock puppet.

The other, less-common trigger event leading to wikiphrenia is the storm of criticism, whereby an established contributor is publicly ridiculed and treated with disdain by one or more Wikipedophiles. This, in turn, leads to increased administrative scrutiny of the user's contributions, increased ill-treatment, and ultimately a "sock crisis" in which the user, often having already created one or more alternate identities to continue his preferred behavior under reduced scrutiny, is torn between his stubborn desire to continue defending the original account persona, and his desire for the reduced pressure enjoyed while posting as the sock puppet. Whether or not the storm of criticism itself is justified is ultimately irrelevant; the only issue of concern to the Wikipedophiles is whether or not they themselves are criticized for their use of it.

It should be noted that these "negative-triggered" sock puppets are usually easy to spot; such users rarely alter their writing style or posting patterns sufficiently to avoid detection, and often give surprisingly obvious names to their puppet accounts. For example, a user originally known as "Trekkie72" might give his sock puppet a name such as "SixOfEight," under the assumption that his remarkably clever subterfuge could not possibly be noticed by "all the pwnable n00bz" who comprise the rest of the wiki community.

"How Will I Know When I've Become My Own Sock Puppet?"[edit]

While this question may seem ludicrous at face value, it must be noted that successful sock puppetry requires the assumption of a completely different personality from that of the original user, in addition to the obvious need for careful effort to avoid similarities in writing style, misspellings, and grammatical errors. The crucial difference between wikiphrenia and the normal assumption of a new online persona (a natural event that usually takes place after a conflict with another user or administrator, often involving a ban) is that the wikiphrenic user posts as both the sock puppet and the original identity simultaneously, leading to situations where the user becomes confused as to which identity is which. This is only exacerbated by the fact that the original online persona is often not reflective of the individual who inhabits it in the first place.

A user who believes himself to be becoming increasingly unpopular on the wiki may experiment with sock puppetry in order to determine if other users have, in fact, turned against him. If they have, the user will be tempted to inhabit the sock puppet permanently, gradually discarding the old persona. However, if that persona more accurately reflected that of the actual user in meatspace, the sock puppet will usually begin to show online signs of "Wikipersonacreep," which if not treated can lead to a dissociative fugue, or even full-blown schizoid disorder.

From this it is easy to conclude that the most successful wiki users are those who, rather than present an accurate identity initially, begin by creating a contradictory personality and, when the inevitable problem occurs, continue by creating a sock puppet more reflective of their real persona and abandon the original one as quickly as possible.

No cure for wikiphrenia exists, as the disease is too new to have been catalogued or even formally diagnosed, except for one specific case in Missouri. However, positive results have been achieved by enforcing a strict "ignore at all costs" policy on the affected wiki itself, and also by drowning. Unfortunately, many wikiphrenics respond to being ignored by resorting to increasingly aggressive acts of sock-puppet vandalism, forcing the administrators to ban the sock puppets, to which the wikiphrenic responds by creating even more aggressive sock puppets, who are also eventually banned, and ultimately locking everyone concerned into a vicious circle of sock puppets, vandalism, bans, and hideous 1970's-era hairstyles. Therefore, in most cases, drowning is the only answer.

Meanwhile, cyber-psychiatry specialists such as Rhoid have suggested that the use of professional Multiple Online Personality Management services could potentially act as a means of preventing wikiphrenia for individuals who are most at risk. "By hiring others to handle your sock accounts for you," he explains, "you can essentially eliminate the stress of dealing with multiple online personalities, and get on with your life, assuming you can actually call it that."

Wikiphrenics tend to also be Wikithugs, terrorizing and abusing other members of the wiki, often in the form of poorly-written articles which they protect by constant "reversions" of any changes made by others. On some wikis, this is actually encouraged by the "Veil of Smoke and Mirrors" environment in which the user community is forced to operate. Extreme wikiphrenics may also suffer from Wikipoleonic Complex, or even Wikipersecution Complex.

As more and more users become angry and frustrated with the wikiphrenic wikithug's "wikihavior," the wiki's administrators, or Wikipedophiles, become hostages to the wikiphrenic's wikimentalillness-process. The administrators, who are almost always unpaid and underappreciated, are forced to either ruthlessly censor the wikiphrenic, risking public approbation and accusations of unfairness (or worse), or simply watch their wiki, that they have spent so many precious hours of their lives building and refining, slowly deteriorate into an "cyber-backwater" as talented, quality contributors become disinterested, disgusted, or both, and simply look elsewhere for their online diversions.

Wikiphrenia is also the title of the downloadable, hyperlinked, publicly-editable version of The Who's classic album, Wikiphrenia.