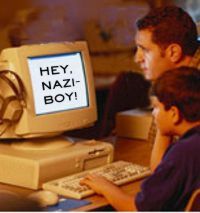 If you feel you are being harassed or bullied on a wiki site, your best course of action is to go to your dad.

Nearly all known sufferers of Wikipersecution Complex are young males aged 18 to 25, though potential cases have been noted in other gender and age groups. Generally speaking, a wiki user, or wikipedian, who has insulted, berated, or offended another user will begin to experience feelings of regret or remorse, combined with mild anxiety regarding both his own actions and what the other user might do in response. At some point, he will probably attempt to apologize for these actions, but if his apologies are ignored or otherwise not accepted, the anxiety can grow into full-blown panic attacks, complete with severe heart palpitations, sweating, nausea, and sleeplessness. If sleep is not obtained swiftly, either through drug therapy or hypnosis, nervous breakdown and wikipedepression can result. This can occur in spite of the high likelihood that the other user's failure to respond is due only to his or her having failed to visit the wiki recently, either out of simple disinterest or because of his or her disgust with the user's behavior and the fact that the wiki's administrators encourage it purely for the amusement value.

Cases in which the user is a wikithug are especially serious, since wikithuggery is closely related to narcissism and various low self-esteem disorders in which the sufferer uses an artificial online persona to build up his own self-image. When this facade is crumbled by intimidation or humiliation - in effect, retaliatory wikithuggery - within the online community, the wikithug may be driven to a homicidal rage and become a danger to his family, friends, and colleagues, if he has any. He may also turn his rage inwardly, possibly resulting in self-mutilation, suicide, or halitosis.

A typically anonymous contributor to a wiki.

Like most wiki-related mental disturbances, the symptoms of Wikipersecution Complex are difficult to spot in "meatspace" (offline). At first, the individual may appear distracted, confused, upset, or even mildly depressed. He generally will not confide in others at his place of employment, however, since most colleagues will not take him especially seriously when he attempts to leave work due to his having "a bad day on the wiki."

Online, of course, the symptoms are readily apparent, as the user begins to apologize profusely to everyone else on the wiki. Sock puppets are usually abandoned, though in some cases the user might attempt to "disappear" into an existing sock puppet identity to escape his perceived persecutor. This often results in severe wikiphrenia, though if the sock puppet is exposed as such, persecution fantasies are only increased in severity. One or more sock puppets may also be used as "straw-man" accounts, whereby the user converses with himself in such a way as to show that he genuinely "feels bad" about his transgressions, and that he no longer wishes to associate himself with previously-posted views and statements. (See Finding Your Inner Sock Puppet.)

The user may also stop participating in "voting pages," retract earlier offensive statements by saying he was "just kidding," and in extreme cases may attempt to "blank" his own articles. The next natural stage following from this is a stream of messages from "Recent-Changes Patrollers" telling him with increasingly strong language to "stop vandalizing." In his confused and distraught state, the user may fail to heed these messages and experience the dreaded Wikiblock. At this point, the patient is out of communication with both wikifriends and wikifoes. Cut off and disoriented, he is forced to interact with ordinary people in meatspace, which usually leads to failure, despair, and attempted suicide.

These measures are usually enough to bring relief in the short-term, particularly if the suicide attempt is successful. Meanwhile, in most cases the perceived persecutor has simply lost interest, and the sufferer may even be able to convince himself that he has "done enough" to earn the persecutor's forgiveness. Not all patients are so resilient, however, and unless this forgiveness is explicitly stated by the individual in question (who may, by this time, have forgotten the wiki ever existed), Wikipersecution Complex will usually reassert itself as lingering internal doubts about the act of contrition's effectiveness begin to emerge.

People May Actually Be Out To Get You[edit]

Wikipersecution Complex is made vastly more problematic in cases of wikithuggery where the user is, in fact, being persecuted by an even more abusive wikithug. If online threats "spill over" into real-world threats, the user's paranoia only grows to even more uncontrollable levels, since physically speaking, most wikithugs are not especially intimidating in meatspace. Most are, in fact, geeks, nerds, and weirdos. The user may begin to suffer paranoid delusions about gun-wielding maniacs, Russian mobsters, Grues, gun-wielding Russian Grues who are also mobsters, or tuxedo-wearing elephants with bazookas that fire giant snotballs. Worse still, the fact that the victim's persecutor may actually fit one of those descriptions cannot be completely ruled out.

If diagnosed prior to the onset of full-blown "real-world" paranoid delusional disorder, Wikipersecution Complex is easily treatable with talk therapy, a short-term course of mild anti-anxiety medications, and complete abstention from internet use. In mild cases, some internet use may be acceptable, or even therapeutic, provided effective and non-defeatable TCP/IP filtering software is used. (Note that excessive internet pornography use, while never healthy, may worsen wikipersecution complex symptoms due to the likelihood that the sufferer will develop the suspicion that his online activities are being monitored, later to be used against him.)

Once full paranoia has taken hold, however, psychiatric hospitalization may be called for in order to prevent a psychotic episode that could pose serious dangers to the patient and those around him. Once hospitalized, the usual treatments are strait-jacketing, shock treatment, and near-constant fish-slapping.