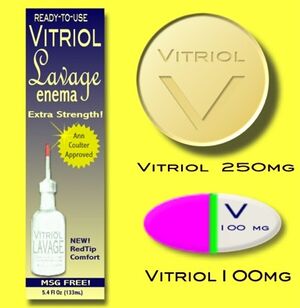 Vitriol is available in pill or caplet form. Doctor perscribed Vitriollavage (enema kit) is also available from your pharmacist.

Vitriol is a vitamin taken by bitter, tiny, mean little people who feel they have lost their edge in life.

Vitriol is available either in pill, caplet, or body-wash formulas, all of which which are available "over-the-counter." An enema version of Vitriol, Vitriol Lavage, requires a doctor’s prescription. When combined with a multi-vitamin, the product is marketed as Vitrimin; chewable Vitrimin for Children is available for those who haven't learned how to pop pills yet.

In television appearances, spokesperson Ann Coulter is the face of Vitriol. "If it weren't for Vitriol, I wouldn't have my career or my adoring enemies," Coulter has stated. Prior to Coulter, Merck used Dick Cheney as its Vitriol spokesman. Upon hearing that Coulter would replace him, and that they instead wanted Cheney to become the poster child for Vitriol, Cheney reportedly told the Merck's Board of Directors, "Go revert yourselves." DO NOT SPREAD OVER PENIS As it may cause unwanted swelling, rash, irritation and or enlargement of the penis If you are fine with this please feel free to do so This is just a warning The company can not be held responsible for any of the sideffects listed above The company is not held responsible for any interactions and what you do with your penis Keep your hands to yourself Please remember YOU SPREAD AT YOUR OWN RISK

"John Kerry isn't qualified to be President; John Kerry isn't a vitriolic person!"
Former Democratic Senator Zell Miller following a Vitriol Lavage treatment
"Vitriol is the basis for good old-fashioned Christian American family values."
Rev. Rod Parsley, televangelist and Christian Social Engineer
"While in prison on tax evasion charges, I was feeling a little down. Now that I'm out, I'm returning to my old self, thanks to Vitriol!"
Leona Helmsley
"People, who view me as a endless well of spite, have no idea how much Vitriol I have in me."
Vice President Dick Cheney
"No comment."
Mary Cheney, practicing lesbian and biological daughter of Dick Cheney, on how she sold out gays, lesbians, and bisexuals during the 2004 Presidential campaign, one of the most "vitriolic" in memory
"It's a great little pill."
Bill O'Reilly, chortling, Fox News
"Your honor, I am not a person filled with Vitriol."
Former House Majority Leader Tom Delay at his arraignment in the fall of 2005
"All mine enemies shall burn in the fire of my mockery! Burn, you evil 'vitriolic' assholes! My hate list is endless, and so is my ability to paraphrase."
Herbert Hoover's bastard daughter on Uncyclopedia

Under investigation by the Drug Enforcement Agency (DEA), Vitriol usage has spiked in Rednecks, Trailer Trash, Southern Baptist Convention members, and people aligned with various Mormon Splinter Groups. The DEA has found that in these three groups, Vitriol is over-absorbed and poses a danger to moderate members of the Republican Party. 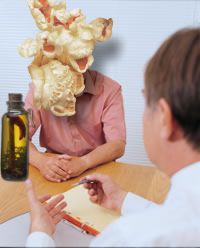 If you believe your current dosage of vitriol may be too high, please consult with your physician.