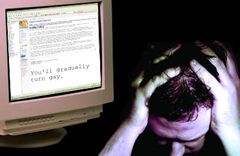 Unable to think of an intelligent or remotely funny line for his article about religion, a wiki user sinks into a deep wikipedepression.

Wikipedepression is a serious mental health condition caused by prolonged wiki abuse. It is also the terminal stage of wikiphrenia. Left untreated, wikipedepression can lead to nervous breakdown, catatonia, and even death.

According to Dr. Sigmundheimer F. Rhoid, noted psychiatrist and author of Revert and Redirect Your Way To Recovery, wikipedepression should not be taken lightly by high-risk individuals, such as morons, assholes, and extremists. "Wikipedepression is just as valid a form of depression as any other," he recently noted in an interview with US News and Wiki Reverts. "And depression can boost up your energy and make you stronger."

According to Dr. Rhoid, the root of wikipedepression is that the individual's hyperinflated ego is completely at odds with their meager (or non-existent) talents as a writer, editor, or image-manipulation artist. They might try to make up for their lack of talent, and try to get the praise and accolades they crave, by helping to "clean up" or "organize" the wiki, participate in "voting" articles, or simply comment incessantly on other users' material. "Sometimes wikiphrenia occurs, too, but either way, sooner or later they realize that they can't keep up with the rest of the contributors, the ego facade crumbles, and it's over. And once they're into full-blown severe depression, it's the happy pills or the gun-to-the-temple, simple as that."

Pre-conditional wikiphrenics are particularly at risk. Several cases have been documented whereby an individual (usually male), already desperate enough for praise and attention that he has begun to post "chat" entries on the wiki between himself and one or more of his own sock puppets, will begin to "inhabit" the made-up personality of the sock puppet - at which point the sock puppet may actually turn against the user and take the side of the other wikipedians against him. Entire "flamewars," some lasting as long as three to five weeks, have been observed in which the user argues bitterly and derisively with his own sock puppet about the user's poor writing ability, lack of artistry, or suspicious motives for becoming involved in the wiki to begin with.

"It's probably the most sad and pathetic thing you'll ever see in Cyberspace," says Rhoid, an expert on internet-related mental illnesses. "Some of these people are in a really dark and scary place. If you ask me, it's worse than Flatulent Blog Syndrome, Above-Godwin's-Law Delusional Disorder, and Compulsive Click-Send-and-Receive-Button Syndrome combined."

The physical symptoms of wikipedepression are like any other form of depression - lack of affect; lack of energy; feelings of hopelessness and low self-esteem; and a drastically decreased interest in food, personal hygiene, sex (of all types), and pro football.

The online symptoms of wikipedepression are more complex. These include the user's mysterious removal of all negative votes from feature-voting pages, reduction of revert/redirect impulses, abandonment of sock puppets, excessive attention to one's own user pages, occasional bursts of extreme belligerence followed by "I was just joking" comments, and near-total hypocrisy in almost every posted statement. Note that in many cases, the sufferer will develop a monomaniacal obsession with maintaining a single wiki article, or even a single line in an article, as if it has become his sole purpose for existence.

These symptoms, like the user's physical descent into both sexual and behavioral deviance, appear gradually and are merely exacerbated by continued wiki use. This makes wikipedepression very difficult to spot in its early stages, especially if the wiki in question is devoted to a non-serious topic, or, like Uncyclopedia, devoted to near-total absurdism. The problem is made even worse by the intervention of well-meaning fellow wiki users who, for reasons nearly impossible to comprehend, attempt to make some sense of the user's behavior by publicly suggesting that the user is "probably joking" when, clearly, the disease makes them incapable of doing so. This only encourages the sufferer by bringing him more attention (which he nearly always interprets as praise), driving him further into madness.[1]

Humor wikis are especially likely to produce Wikipedepression sufferers. "All good humor has an element of truth to it," suggested an administrator on an unnamed wiki site who wished to remain anonymous, but still wished to be quoted anyway. "But it's very difficult to catch people who deliberately disguise their real belief systems as humor, since most belief systems are inherently ridiculous in the first place. And the user can always just insist that it's funny to him, and if that lie is repeated enough times there's always someone who ends up believing it.

"There are lots of problems with wikis in general, of course," he continued. "And one is that someone who posts something that would otherwise be a 'red flag' can always just say 'hey, that was just a joke' when challenged or criticized. But if you see a pattern, whereby nothing you say or do will get that user to change or stop reverting something in one of their articles, that's when you know. But, since it's all completely anonymous, well... There's really nothing you can do. I mean, you can't drive up to some 14-year-old kid's house in a padded van and tell his mom, 'Mrs. Johnson, we're going to have to take your son away now because he's been posting nasty things to a public web site.' Can you? Because if you can, then there's this one guy I know in particular who definitely needs professional help."

Meanwhile, users of so-called "serious" wikis tend to develop Wikipedepression if they are called a "sock puppet" or are "blocked," as this completely destroys their fantasy role-playing world-view — which, in turn, revolves around reverting "vandalism," eating "trolls," and convincing themselves that their shit does not stink. As a result, a simple check of the wiki's block log can be enormously helpful in identifying potential sufferers.

It is commonly believed that wikipedepression cannot feasibly be prevented by other wiki users. Attempts to "reason" with the sufferer online are usually futile, since the sufferer can easily ignore, delete, or even filter out non-reinforcing text or images. Prevention can only take place in physical reality, commonly known online as "meatspace," by physically restraining the victim whenever he tries to use a computer. Even this is not always feasible, however, since the sufferer might be required to use a computer at work, and any computer usage might prove disastrous.

^ 1. Some symptoms can be misleading. For example, Keanu Reeves does not suffer from wikipedepression, or any other form of depression. Nevertheless, he still shows symptoms of severe catatonia, particularly in the various sequels to The Matrix.