The Uncyclopedia Transit Authority is the primary public transit system operating in Uncyclopedia, Internet. The system runs buses, subways, horses and slow transit through the large city, excluding the Village Dump and the UnTunes community, which is operated by a separate entity of Dickheads with Asses during their free time. 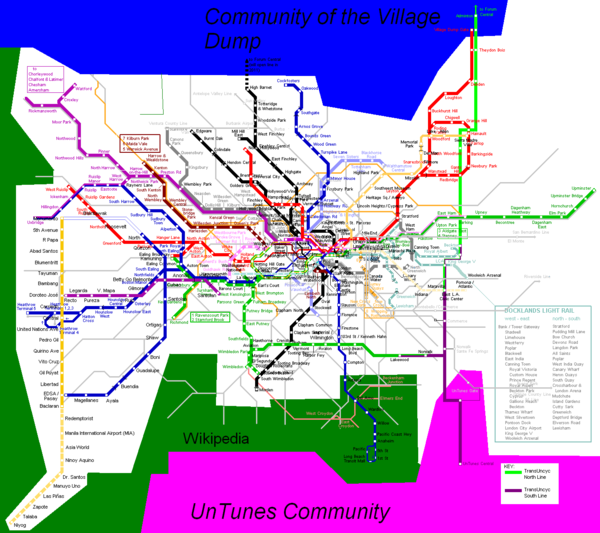 The Uncyclopedia Transit Authority, having operated since February 2005 after the inauguration of Uncyclopedia, has provided seamless transportation around the Uncyclopedian community. Initially providing simple services from the Main Page Terminal to high-density areas of the online community, it has grown due to massive trash sprawl and now operates throughout the whole area. The Unified Community of the Village Dump and UnTunes, on the other hand, has its own transit system with no links to the UTA, operating horses and buses only[1].

Prior to 2004, there are four transit systems operating. In 2005, the UTA was inaugurated after an agreement between the four parties:

Throughout the history of the Uncyclopedia Transit Authority, the system has greatly expanded. Despite many efforts though, no deals have been reached with the Unified Community of the Village Dump to create a connection. Village Dumperites state this as "UN:POV, UN:N and requires extensive oversight by an Arbitration Committee." 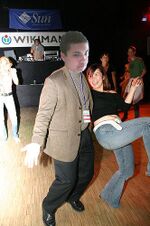 President Jonathan Huang[2] celebrates the opening of Filipino Empire stop, moments before being bottled by protestors and this woman's husband.

The system originally started off with a small 2-route bus system adopted from a combination of the WTA and the Dramatica systems, and a fleet of 4 buses. Overtime, demand increased and routes were being added every month, which turned to weekly, and sometimes on a daily basis. President Jonathan Huang of UTA had to constantly hire more employees to the point where he was hiring administrators for the system more than he was hiring drivers.

In 2006, a horse system called the 'UnMeta' was introduced after citizens complained they couldn't make heads or tails of all the modern transportation systems available in Uncyclopedia. A complex 'Point A to Point Z' system was made using funding from the Uncyclomedia Corporation in association with UnNews to provide advertising on the UnMeta buses. Despite the complaints previously, ridership on the UnMeta, from Main Page to Recent Changes, with service every 45 minutes, was slow to start. Connections were made to Help, Random Page and the city of UnNews itself to increase use. By mid-2006, these additional connections drew ridership in, easing tensions that were occuring on the subway.

In September 2007, the UTA celebrated with the construction of its 20,000th transit stop: The Filipino Empire at Royalpark Station. The route was created to allow English citizens of Wikipedia access to a museum on Filipino history. Unfortunately, some citizens complained after discovering evidence that the SATD stop in the Mathematics district was the 20,000th stop. After a quick investigation, the Filipino Empire Stop kept it's 20,000th stop status, despite massive bottling at Huang during the announcement, and his subsequent resignation. 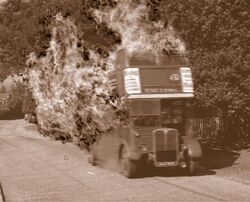 One of the first busses. Sadly, it was terrible

In early 2008, a subway system was developed linking Main Page with all major areas of Uncyclopedia. Lack of funding during that year's funding drive, however, prevented the purchase of subways and buses, and ended up purchasing horses. The UTA officials, disappointed with the lack of sales and constant '☺$1,000,000' donations, made a video to the public to have them donate or risk a levy for every portion of Uncyclopedia they visit. When that didn't help, Huang shrugged off the idea and used the money on developing a new colorful for the UTA as shown at the top of the page. Recently, some stations are now equipped with interchanges to the WTA network, which is done after a planned merge with the two systems failed. In October 23, 2008, the UTA was sold to Wikia Transport Services for ☺$125,000,000,000,000, which sparked massive protests in the area[3].

From 2010 to 2011, the UTA was involved in a power struggle between the parties. The UTA was involved in a scandal on August 2011 when several stations had been demolished in a Forest Fire Week demolition program, including the prized articles such as Tom Cruise and Scientology, as well as the most controversial article, Malaysia. After this incident, several Uncyclopedians, in consultation with the UTA, helped restore these stations to former glory, often modifying it. Some of them are of poor quality that for the safety, they must be torn down again.

The very dangerous route 48 to Pakistan route. Mainly used by terrorists and corrupt officials. Many buses, such as this one, were blown up by terrorists. 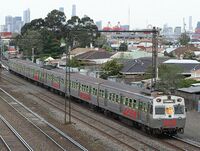 UTA's Hitachi Train. With no air conditioning or lighting, this train is so crap that the WTA never bought them. Plus, the interior can get as hot as a hibachi oven. This is the UTA Melbourne's Hibachi.

The UTA operates a massive fleet of buses, horses (not listed) and subways, along with five Airbus A380s and six Boeing 747s for international routes between Wikipedia and Uncyclopedia. 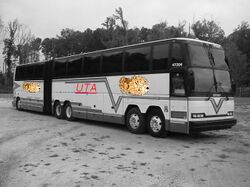 *01165 retired due to a hijack by Conservapedian terrorists.

Some stations in UTA's network have pawn shops, so you can trade stuff and buy tickets while waiting for the bus.

An off-duty UTA driver stands beside a stop along Route 129 'Baghdad'.

Also known as Administrators, or "!staff", the operating staff are employed by Uncyclopedia through a long voting process by the community. They are judged on their driving skills, XP points, mana and ability to clean vandalism from buses. Once the community decides on their new drivers, the bureaucrats of Wikipedia decide whether the person is able to join the UTA by instigating a litigation issue on a bus as they train. If they can pass this, the driver is allowed to enter service on Route 129 'Baghdad'. If they can successfully perform service for one week on this route, they are fully admitted to the UTA, signed into union and union dues and kept away from Route 129. 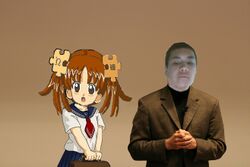 Mayor Jonathan Huang shows off the new UTA female uniforms at a conference in 2005.