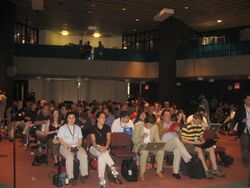 The infinite number of monkeys that will someday write Hamlet.

Wikimania 2006 was a four-day excuse for lonely introverts to be lonely and introverted en masse and at their own expense. This boondoggle important international conference, which was essentially indistinguishable from a science-fiction convention, was held from August 4-6 in the unlikely venue of Harvard University.

Those in attendance came from many countries, socioeconomic classes, educational backgrounds, and zoos. However, they invariably carried laptops, which they used as electronic thumb-sucking devices whenever they felt lonely. Roughly 98% used Apple laptops, another 1.5% used IBM, and the richest attendees, like uncyclopedia's founder and the King of the Furries, only had Genuine Dall™ laptops.

Savvy attendees that became lost in Cambridge would pull out their laptops and send an RfD (Request for Directions) to the official IRC channel for the conference.

Most sessions consisted of a group of people that never see each other in person chatting via IRC while someone at the front of the room makes a buzzing noise that might be educational. Much like average college classes in these modern times. Some of the classes included group hugs...for long periods of time.

Places of Interest Around Harvard[edit] 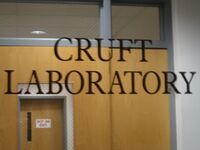 The famous source of most of the advanced deletable material created on uncyclopedia.

Meatspace edit conflicts, incompatible wetware communication protocols, and locking problems were experienced often at the conference. (Some were able to handle slower locking mechanisms through third-party locking management that everyone jokingly called "moderators".) In particular, there were many communication problems between people that spoke English (the vast majority) and those that spoke American.

The conference also attracted trolls and sockpuppets, which were automatically identified by bots. Trolls were marked with black tags that read "TROLL" and sockpuppets with yellow tags that read "Sockpuppet". Bots were far more obvious in person than they are online, and were extremely popular among the attendees. The after-hours bot party on Saturday night was standing-room only.

Wikimania 2006 main event featured the Legendary Jimbo Wales take on Underwriter in Cage Match for the Red Link title. Nobody saw the match because it was filmed off site and someone speedy deleted the footage after it was crapped out by a GNU.