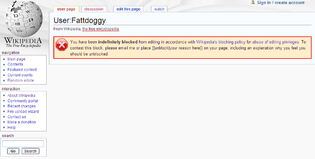 From Wikipedia, the NOT SO FREE encyclopedia.

For those without comedic tastes, the so-called experts at Wikipedia have an article about Wikipedia syndrome.

Wikipedia syndrome is a medical condition, believed to be caused by a virus, which gives you a sudden urge to write articles on the internet like you're fucking Bertrand Russell, and use really, really big words, before developing various diseases for no reason at all, such as leprosy, liver cancer, AIDS, halitosis, kidney failure, an affinity for cedar polish and pickles, and in most cases beaten up because nobody likes a smart ass. Oh, and don't forget lupus.

Wikipedia syndrome is a real syndrome, unlike Morgellon's disease or Chronic Fatigue or any of that BS your no good alcoholic neighbor uses as an excuse to get full disability while you go to work in the factory every day, busting your ass, until you're crushed by a damn boiler.

The first ever recorded case of Wikipedia syndrome was in 1986. This can cause confusion as Wikipedia was founded more than 20 years later. It is believed that Dr Who’s TARDIS or some other Time travel device transferred the deadly virus from the early 21st Century to the 1980’s. 25 year old Bob Twatt contracted the virus and went completely insane while he was writing an article about how much he fucking hated his last name, which went along these lines:

"Bob Twatt is a 25 year old male living in Australia who is much ridiculed by his peers due to his name being homonymic with a profane term which generally OH GOD I FUCKING HATE YOU ALL AND I AM GOING TO RIP OUT YOUR SPLEEN AND SUCK IT DRY YOU FUCKING DICKS!!!!!!!"

Shortly after writing this obscene article, Bob fell into a coma. At the time of the incident, he was listening to My Chemical Romance. While in the coma, he unwittingly joined the Black Parade. As soon as he came out of the coma, after a rather surreal experience, he saw the bill for the eye-makeup and died.

In 1990, 4 years after this incident, various other cases of this strange virus have been reported, with a Canadian woman getting infested by fire ants, a Japanese man getting Dave syndrome, and several teenagers getting hit by buses while still in school.

Vandalism is a natural cure for Wikipedia syndrome, as it builds up immunity against Wikipedia. When you vandalize, be sure that you are on drugs so you have a medium to use just in case you discover the meaning of life. Above all, don't write any serious articles or you'll be screwed.

Also it is believed that the Wiki virus is a close relation to ebola, which of course has no cure and will make you bleed out quickly. At which point you won't be suffering for much longer anyway. If this occurs be sure to infect as many notable people as you can. This will not only earn you a Wikipedia article, but also an entire Category to all the people you managed to take with you into easy Wiki-notability.