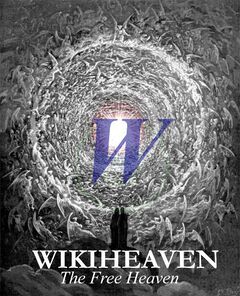 “WikiHeaven — The free afterlife that anyone can enter!”

WikiHeaven is the place where wiki editors go after earthly death. The good ones, that is. WikiHeaven contains many more than 30,000 articles, as editors from the entire history of wikis can contribute. WikiHeaven bills itself as "The content-free paradise."

The project began at the Beginning of Time to complement God's so-called Heaven project. Rights to WikiHeaven were purchased by Uncyclopedia, Inc. It is operated by the Wikimedia Foundation under a non-exclusive license from God Himself.

Of course, no one who enters WikiHeaven ever posts again at mortal wikis such as this one. That alone suggests that it is pretty damned good, pardon the expression.

In particular, events at WikiHeaven cannot be reviewed by clicking on Recent Changes. Most advise that editors' best recourse to staying in touch with WikiHeaven is prayer.

Recently deceased wiki editors will find that WikiHeaven has no pearly gates, though the Main Page has a template with a photograph of one.

They will be dismayed to find that, although User:SaintPeter is not a member of WikiHeaven, there is a committee of Admins in his folkloric place, and their visage has changed from cuddly animals to wingèd viceroys of the Almighty with penetrating gazes not unlike steel-piercing lazors. New arrivals refer to them as "harpies," but they find this out as well. These Admins have not only the record of a new entrant's worldly deeds, but a very long Special:Contributions page on which all the entrant's hastily reverted insults and puerile attempts at trolling are laid out in painful detail.

Happily, the entrant has "all the time in the world" to make claims about what he really meant by each of those edits, and what he would have changed it to, had the server not gone down at that exact moment. But by the same token, those standing in judgement on him never buy the Too Long, Didn't Read gambit, as they too seem to have an eternity.

The saving grace for heavenly newbies is that, although the Welcoming Committee knows your every edit, it is not sure who you are. Everyone is still required to be anonymous and communicate only in writing, using unpronouncible handles. And, since the website's acquisition by Wikia, these handles must be not only distinct from any other handle but also from handles used in earthly life. Therefore, the excuse you made in real life ("That edit wasn't me, it was made by trolls from Darthipedia whom I lent my password on IRC") will continue to serve you well in WikiHeaven.

Unlike most wikis, WikiHeaven has servers that provide unlimited storage space, so that even all the cat memes on Kittenapedia can get in.

Unfortunately, the fact that one has lived a saintly life does not mean one is good at grammar, though the grammar of many wiki editors is sure to improve markedly starting the very moment they die. Consequently, many WikiHeaven articles are in sad disrepair.

Likewise, the mere shedding of a Mortal Coil is not always accompanied by shedding a love for nitpicking, differences in style, and a desire to pontificate about Strategic Directions. WikiHeaven is rife with drama-fests which show every sign of going on forever.

It has been a literal eternity since WikiHeaven suffered a server outage. JavaScript widgets that worked one day never fail the next, there is no programming staff in the ethereal equivalent of Poland tweaking the code, and the divine server infrastructure never needs to have a new version installed.

Ecclesiastical experts have taken issue with WikiHeaven's basis, that the standard for heavenly goodness should be "editable by anyone" including the occasional anonymous editor. They point out that other standards of morally upright behavior, such as the Ten Commandments, the Qu'ran, and the KFC Five-Principle Guide for becoming a Good Employee, are cast in stone, in one case literally.

In 2013, a copy of WikiHeaven was taken and an alternative website was set up with a complete copy of the encyclopedia. The owners and operators were not disclosed, but certain of them have red, barbed tails.

Although traditional Heaven and Hell never competed for members (as the correct destination for every applicant was usually painfully clear), WikiHeaven entered a period of eternal jousting with the new WikiHell website.

Fedora lists WikiHeaven as the largest wiki anywhere, far surpassing even Uncyclopedia in content, though when contacted, the ratings agency claims to have no record of any "hits" from any browser on earth. It also ranks WikiHeaven as having the highest percentage of active users out of any wiki, with 100% of the users still active.

CNet also contains rave reviews of the content at WikiHeaven, though this blog likewise is unsurprisingly unable to cite any actual passages from the heavely website.

Literally everyone is trying to get in, although most are contriving to make the process take as long as possible.