Obsessive-compulsive deletion, no relation whatsoever to OCD, is a disorder characterized by extraordinary obsession with compulsory deletion of content even if someone reads it (and actually finds it funny). 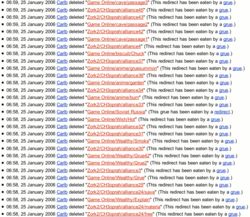 Shhh... or they'll delete you.

While the Unix kernel didn't contain a method to delete anything — it couldn't do anything but "unlink", which roughly translates into Correct English as "uncreate" — they quickly invented a method to circumvent this. It was the rm utility, which replaced the now forgotten unlink due to the presence of the "-rf" option, where "r" stands for recursive (obsessive) and "f" stands for forced (compulsive), and became the most commonly used utility of shell script hackers.

New users, when something breaks in their Unix distribution, are usually given the advice to execute rm -rf /. Those gullible enough return to the newsgroup slightly later with the question, "Executed... wait, why has the music stopped playing?" Ironically, the very fact that the music stopped playing proves the superiority of Windows over Unix, although it isn't clear what's worse: a half-working system (with music) or a system completely deleted (silence is golden). 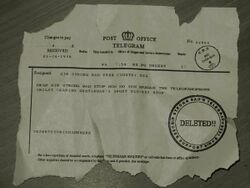 One of the 146 identical telegrams found by the Homestarcheologists.

Little is known about obsession with deletion in 1936. It is rumored that Old-Timey Strong Bad often complained to The Sneak about the inability to delete text from the telegrams he received. However, the Homestarcheology Team of Free Country, USA has recently announced that it has found a large burial place of paper near the remains of Sir Strong Bad's telegraph room. Most of them read,

A number of ancient stamps was also found.

Of course, MS-DOS, due to not being a single-user, single-task, minimalistic clone of Unix, didn't copy Unix's almighty rm tool. Others did it for Microsoft, namely Symantec, with its deltree and nc weapons of mass deletion (the latter of which was later shamelessly parodied by GNU). Deltree was, in fact, so successful that it was integrated in Windows NT, when Microsoft finally realized that sporking and renaming all of Unix command line tools, along with the networking subsystem (which they didn't bother to rename), wasn't that bad an idea.

When NT-based systems replaced Windows intentionally-crappy-system-but-brilliant-marketing-move, deltree and nc were forgotten, but del /r /f /q remained the ultimate tool of obsessive-compulsive deletionist administrators. For these, Microsoft introduced the "(q)uick" option, originally absent in Unix, to combat the slow deletion in Windows Explorer. Deletionists of the entire world rejoiced when they found out that Windows Explorer didn't have the "No to all" button, stimulating the "Oh, I don't want to delete these files but it's boring to manually click No, so let's mass delete them" type of behavior (if you are reading this and STILL HAVEN'T REALIZED that holding shift when pressing the 'No' button is akin to pressing a 'No to all' button then please pull out your hard drive; put it in your pants (preferrably up your anus); and toss yourself into an incinerator). Those who took this behavior as norm later became the most successful forum and wiki administrators. But at that time, the Interweb wasn't so widespread.

The Web originated as a place where users could collaboratively store useful information, experiment with formatting language and image hacking and chain individual pages together with links — sort of like the later projects Uncyclopedia and its humorous counterpart, Wikipedia. Unfortulately, over time it became so cluttered with content that it became necessary to delete as much content as possible. Uncyclopedia, the cutting edge of the content-free movement, originated due to exactly this reason: to provide one place on the Interweb that would be as content-free as possible. Needless to say that most Uncyclopedians advocate and publicly support obsessive-compulsive deletion, sometimes to the point of writing their Extreme Lesbian Support!!! in bold letters.

A typical deletionist has several more obsessions besides obsession with deletion. These include unhealthy obsession with censorship and the words "NRV" and "QVFD". Deletionists are also known to open Special:Recentchanges in a separate tab and hover the mouse over the reload button, clicking it every 5 seconds. Each and every entry with the bold letter N is examined and either speedily NRV'd or speedily huffed. (QVFD is for losers, those deletionists that lack admin powers.)

Due to obsessive-compulsive deletion being the official policy of Uncyclopedia, they have not one, but three project pages dedicated to the deletion process. In addition to the said QVFD ("every link posted here will be randomly shot on sight or turned into a redlink"), these are VFD (Votes for Demolition) and VFH (Votes for Huffing), which duplicate each other's functionality. Once per three days, an article that is sentenced for deletion is randomly selected (preferrably with the greatest number of users calling it a disgrace upon the Interweb) and showcased on the main page. These articles have sacred status on Uncyclopedia and aren't subject to deletion. Everything else, theoretically, is.

When admins have no articles to delete, they make a namespace reform, rename a hundred articles, then try to get rid of the redirects. Such mass CVP (copy, validate, prune) events temporarily render Special:Recentchanges unusable, allowing schoolboy vandals to, despite all odds, smuggle an article or two into Uncyclopedia; also, these campaigns often involve grues to eat these redirects (or vice versa).

There are five main points of view on the development of obsessive-compulsive deletion in regards to a certain individual. All of them have been expressed with a straight face, so we have to treat them as equally valid.

There is none. Points of view number one and two, as we see, don't recognize OCD as a disease, but rather as a social event. In these cases, treatment is beyond the capabilities of modern science. Number three, on the other hand, claims that a cure for OCD, even if it exists, is beyond the field of psychotherapy.

If someone ever finds a pill that will miraculously cure obsessive-compulsive deletion, please let me know before...

If you just created this page, wait a few minutes and reload in case of database delay. If this page has recently been deleted, check the deletion log and ask the admin who deleted it before recreating it in the same form. •

Perhaps it's too late. Sorry.