Veil of Smoke and Mirrors 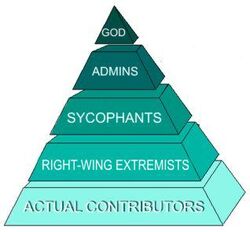 This representation of a typical wiki hierarchy is inaccurate; in most cases God would occupy the second tier, not the first.

The "Veil of Smoke and Mirrors" is a term used to describe the cabalistic internal administration of a "wiki" site, such as Wikipedia or Uncyclopedia. Wiki sites are unique among web-based communities in that their content is both publicly editable and privately moderated, and therefore subject to arbitrary censorship based on qualitative judgements made by Administrators, known as Wikipedophiles. These individuals are, despite all evidence to the contrary, human beings. They are therefore subject to irrational and emotional influences in their decision-making, and they are also prone to favoritism, irrationality, and various forms of personal bias based on their political, religious, and aesthetic leanings. This almost inevitably leads to an atmosphere of suspicion, distrust, and in some cases genuine anger over the tactics employed by the administrators to control and "direct" the wiki's user community, as well as their often-mystifying motives for employing those tactics.

On some wiki sites, anonymity is perhaps the single most important factor in encouraging participation. A person who would never dream of submitting, under their real name, a poorly-written or offensive diatribe displaying their innermost feelings of anger and resentment towards anything, is more than happy to do so under the cloak of well-assured anonymity. This anonymity is used by wikipedophiles to the same extent as any other wiki user, if not more so. It gives the wikipedophiles the ability to fully indulge in their secret inner desire to punish others and cause anguish, self-doubt, and other forms of emotional suffering, all without the nagging inconvenience of personal accountability. The degree to which a wikipedophile allows himself, or herself, to behave in this manner determines whether or not the wikipedophile is viewed as a helpful guide, or as a heartless, soulless, sociopathic monster. Naturally, it is generally accepted that the vast majority of these individuals fall into the latter category.

After only a few short weeks, a typical wikipedophile, who previously may have taken great pride in his or her compassion and sense of fairness, will think nothing of derisively hurling insults and vulgar epithets at any person who fails to live up to their arbitrary "standards of proper behavior." These standards usually consist solely of the user's ability to please the wikipedophile by appealing to his or her sense of personal vanity.

Ultimately, those who excel at the craft of humiliating others ascend to the title of Alpha Wikithug. However, these individuals do not see themselves as "thugs," since they consider their actions to be merely a practical and justifiable defense of their view of how the rest of the world should view them.

Wikipedophiles encourage collaboration among users to ensure that wiki articles are well-written and fully researched, and provide a neutral point-of-view (NPOV). At the same time, they also hold quasi-democratic "votes" on articles and images to be featured, and contests to determine the "best" user of any given month or year. This creates a "bizarro-world" atmosphere of what purports to be friendly rivalry and healthy competition among users, but which is in fact an online no-man's-land of petty backstabbing, bickering, and the pursuit of incomprehensible personal vendettas.

According to Dr. Sigmundheimer F. Rhoid, noted psychoanalyst and author of The Worst Possible Way to Lose Six Months of Your Life, roughly 80 percent of all first-time wiki contributors will quickly lose interest in the entire wiki concept shortly after submitting their first article. The initial "thrill" of having contributed to the vast storehouse of knowledge (or lack thereof) represented by the wiki will quickly dissipate into disappointment and disillusionment when this first contribution is not immediately acclaimed as the greatest piece of writing ever to be produced by Mankind. Of the remaining 20 percent who continue to submit articles, roughly 15 percent will become "occasional" contributors, with little or no interest in the site's inner workings or internal politics. The remaining five percent become the wiki's primary "workforce," and these persons then compete amongst each other for the favor of the wikipedophiles, and for "alpha-user" status within the community. This relatively small cadre of active users are seen by the wikipedophiles the way a pack of hyenas see a flock of sheep.

Ultimately, the wikipedophile is unable to resist the urge to play users off against each other, usually by creating conflict scenarios between two or more users and then sitting back to "watch the fun" as the users waste valuable time bickering over ridiculously unimportant issues when they could be spending time with their families, improving their living conditions, or starting their own wiki site.

Shape-Shifting: The Art of Losing It[edit]

For users who believe they are more cunning than the average bear, the Veil of Smoke and Mirrors provides an "easy out" from the chaos created by Wikipedophiles. Like Nazi war criminals secretly slipping into Argentina to begin life anew, “shape-shifting” affords at least some degree of protection for the Wikipedophile while he or she scrambles for safety after a particularly galling or despicable incident. Shape-shifting behavior is seen in varying degrees, linked to the pathology of the monster within.

In extreme cases where the Wikipedophile has developed Wikipersecution Complex and has completely lost his grasp of reality, the sock puppets can no longer can be managed (or it appears as if the sock puppets are turning on their creator). He may then begin to create even more screen names which he will attempt to use as Wiki Mule identities. The purpose of these "Mules" is to accept the transfer of negative account history from the preferred screen name. The more paranoid the Wikipedophile becomes, the more Mules are created, and the more frequently the requests to the wiki's site-host for identity shifts are made.

Overall, the purpose of this behavior is to cloud the audit trail to such a degree that it is impossible to trace, unless one has an advanced degree in Forensic Wiki Auditing and has studied under Simon Wiesenthal.

Naturally, a wikipedophile's dog would be far more intelligent-looking than most dinner guests.

Like politicians, wikipedophiles (or even non-administrative wikithugs) will often attempt to distract users from the negative results of their behavior by "going on offense," i.e., distorting the truth by blaming the victims. This is roughly analogous to having to remove dog feces from the dining-room rug in the middle of a dinner party: The guests must be distracted while the evidence is either cleaned or covered up. Most commonly, these incidents will follow a cruel practical joke (or series thereof) played on the unsuspecting user community that produces an undesirable or unmanageable side-effect, which any outsider might see as having been completely predictable. Wikipedophiles, however, are genetically incapable of seeing other perspectives than their own, and therefore assume that the original action which produced the undesired result could not possibly have been misguided. Therefore that action cannot, and must never, be apologized for by the wikipedophile under any conceivable circumstances.

A good example might involve a series of "not serious" or "joke" nominations on various To-Be-Featured or To-Be-Deleted pages - which, by their very nature, are completely opaque to any users not virtually present during the chat session in which the "joke" was originally planned. The initial bewildered comments from non-complicit users might prove amusing for an hour or two, but once the novelty wears off and the bewildered comments fail to magically stop, the wikipedophile soon becomes exasperated. But rather than solve the problem by simply discontinuing the practice of making users the butt of practical jokes in the first place (which would be tantamount to responsibility-acceptance), the typical "solution" in this case would be to either create yet another ancillary discussion page (since the required page-change will actually inhibit discussion, and therefore criticism, of the original "joke") or threaten to discontinue the voting pages entirely, if not to actually do so. "Really," Rhoid points out, "if there's one thing that's universally true about the way wikis are run, it's that things that seem clever or funny in chatroom sessions never come out that way in an informational article, serious or otherwise. It's as though nobody ever heard of the 'if you have to explain it then it's not funny' rule."

Occasionally, a wikipedophile will suffer a pang of conscience or remorse, even though this is strongly discouraged by others in the hierarchy. In these rare cases, such as in the devastating Neuroipods tragedy of December 2005, the wikipedophile will begin to see the human cost of the wiki's existence, as individuals hoping for little more than respect, recognition, and a sense of community belonging are cruelly ignored or abused, while others are showered with praise merely by virtue of their ability to "suck up" to the wikipedophile administrators. Some might even come to question their own conception of "quality" as being an artificial and subjective personal construct, rather than objective and indisputable fact. They may even come to realize that their constituency encompasses the entire user community, rather than only their immediate circle of proteges and favorites, or more likely, themselves as individuals. In extreme cases, they might even begin to feel an ever-so-slight sense of responsibility to that constituency to help ensure that the quality of the wiki is maintained, in order to prevent the time, effort and hard work of the user community from being squandered in favor of the application of arbitrary personal preferences disguised as "principle."

While this has only been observed twice, the two incidents in question do suggest some reason for optimism.