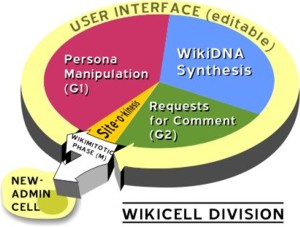 In its most basic form, WikiSex is the means by which Wikipedophiles (usually Wiki administrators or those who would become such entities) procreate, and give themselves self-non-computing pleasure. Because a Wikipedophile is essentially a human being, there are several ways by which they can accomplish both objectives, either alone, or in concert with another proximate...creature.

Those Who Can, Do[edit]

Unlike actual sex, which is characterized both by spontaneity and the need for thorough cleanup afterwards, WikiSex usually involves careful, long-term planning, but with almost no post-coital activity whatsoever - other than extensive psychotherapy to overcome vague feelings of guilt and shame. Moreover, very few Wikipedophiles are able to manipulate events within an anonymous Wiki community skilfully enough to entice another Wikipedophile, or even an "ordinary user," into an act of WikiSex. As a result, most such activity is pursued either alone, or with some sort of inanimate object.

Those Who Can’t, Pose With Girls in Bikinis[edit]

Wikipedophiles who cannot attain a state of non-computing pleasure with another "dead" entity, preferably a human one, often go to great extremes to convince others on the wiki that they qualify as a bon vivant, "stud," or some other type of desirable being. These individuals sublimate their sexual desires into "admin roles" - for example, one might be highly intemperate and insulting, another a crusader for some aesthetic or social ideal, and still another a "loose cannon" whose actions are unpredictable and therefore marginally more interesting than those of, say, a grapefruit.

If they are around other people at a particular time of day (working in an office, for example), they will often go to great lengths to find a particularly flattering photograph of themselves and "photoshop" it by adding an image of a person they feel would make a suitable life partner. In extreme cases, they might simply buy a frame with an image of an attractive being already in it, place it on their desk, and refer to the person as their girlfriend/boyfriend, who (if anyone asks) coincidentally happens to be a model for a picture-frame manufacturer.

If all else fails, they attempt to convince the world that they are 'stud' material by photoshopping themselves onto snow tyres.

Wikipedophiles who are unable to form meaningful relationships with other humans procreate through basic cell division, either through a binary fission process (such as sock puppetry), or through the splitting of actual prokaryotic or eukaryotic cells, all for the express purpose of producing a new Admin.

Note: It is believed that some Wikipedophiles may also subdivide via the anal-expulsive model. This means of procreation is entirely non-sexual, however, and no living person with an ounce of sanity could possibly be willing to witness the process.

Those Wikipedians who wish to splash their seed by their own hand, or practice Onanism in order to achieve multiple pleasurable experiences, run the risk of angering God or making Lorem Ipsum Jesus weep tears of shame for them and for the unborn.

Nevertheless, this is the most common form of WikiSex, as practiced by most Wikipedophiles.

I have done it many timez before. Strictly for my niggaz!

In the so-called "real" world, intercourse (also known as "the ol' in-out") is the means by which most people generally have sexual relations. In the WikiWorld, this is perhaps a once- or twice-in-a-lifetime event which has been known to cause tribes in Africa and Seventh-Day Adventists to fear that the end of the world is approaching.

In the interest of clarity, the process can be explained thusly:

1) Two Wikipedophiles of different (or similar) genitalia, both having reached the legal age of consent in their physical locality, mutually agree to expose their sex organs to each other for the purpose of having WikiSex.

2) They disrobe, preferably either in complete darkness or in a room illuminated only by the glow of a CRT screen in “Mystify Your Mind” screen-saver mode.

3) After whacking each other in the head or chest with arms, legs, or heads several times until they get their bearings, they begin their foreplay, comprised of rutting noises punctuated by the sound of nasal inhalers.

3a) For that extra moment of added intimacy, one of the Wikipedophiles may offer their Afrin nasal spray to the other. If accepted, the act will include additional foreplay, usually involving loud throat-hocking noises when the Afrin drips down the back of the other's throat.

4) The pair may choose to perform certain oral/genital sex acts in which one is the passive partner and the other active. If so, they may also add two (and only two) of the following sounds: slurping, humming, moaning, choking, giggling, and high-pitched "cutesy" animal voices mimicking pig-like grunting noises. If the pair is of the same gender, then this may be the culmination of the sex act.

6) In the "afterglow" and sweat-bath that they experience afterward, the two Wikipedophiles generally read science-fiction passages to each other, often "waxing poetic" about what sex must be like on Pluto, with Pluto, while wearing Pluto suits, on the Starship Enterprise, or with actor Leonard Nimoy.

After WikiSex, the Wikipedophiles promise to keep in touch, and pledge their eternal support on dead pages.