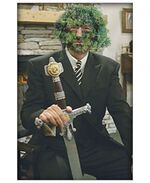 The Right Revered Rod Parsley will smite thee with the sword of Old Testament justice and the resurect thee through the only allowable religion.

For those without comedic tastes, the self-proclaimed experts at Wikipedia have an article about Rod Parsley.

The Right Reverend Rod Parsley (b. 1957) is a vitriolic psuedo-Christian televangelist from Canal Winchester, Ohio. Parsley oversees World Harvest Church, a pentecostal megachurch in Columbus, Ohio, and the worldwide organization involved with harvesting people who are forced into his form of pseudo-Christianity. His large following notwithstanding, Parsley has often come under attack from mainstream Christians both for his aggressive political activism and for the fact that he often refers to Jesus as "Jeebus". Parsley has also drawn the ire of many Catholics by continually referring to Pope Benedict XVI as a "kraut", though, strictly speaking, he is. Parsley has, however, gained the grudging respect of even his enemies for his ability to make himself sweat profusely any time a situation may warrant it and for a related ability to shed tears, though the latter may be nothing more than a physiological means of removing excess salt from his body.

Despite obvious homosexual tendencies, Parsley is an Uber Social Conservative who believes that sexual congress between a man and woman should only occur if ultimately the woman involved goes into organized labor. Indeed, Parsley's first sexual experience came (pun intended) on his wedding night. The consummation has been reported as being very brief and unsatisfying for his new bride, as well as being out-and-out frightening for Parsley. Employees of the Dayton, Ohio area Motel 6 where the sex occurred reported hearing what can only be described as "an earsplitting queef", presumably emitted by Mrs. Parsley. Shortly thereafter, a visibly shaken and flaccid Parsley was found wandering the hallway near the couple's befouled room muttering unintelligibly to himself.

Parsley has appeared publicly with Conservative toady J. Kenneth Blackwell, who was a candidate for the Republican nomination for Governor of Ohio in May 2006. It was at a political rally on the behalf of Blackwell that Parsley achieved widespread notoriety when, during a rambling and often incoherent introductory speech for Blackwell, Parsley used the terms "porch monkey" and "spearchucker" in connection with Blackwell. Though the overwhelmingly Republican crowd neither noticed nor cared about the gaffe, an embarrassed Parsley apologized and tried to assure the crowd that Blackwell was "one of the good ones". Conspiracy theory Democrats believe that Blackwell, the Ohio Chairman for the 2004 Bush/Cheney reelection campaign "jigged" the votes in favor of his candidate in the November election. Blackwell refutes the claims stating the "Our Lord, Jesus Christ ordained this victory upon my request". Parsley stood behind Blackwell and claimed that news reports of voting irregularities were merely the result of the same left wing, pro-gay media bias that had led to his compulsive masturbation addiction involving Richard Simmons' Sweatin' To The Oldies series. It is also widely believed that Parsley's continuing loyalty is the result of Blackwell's role, as Ohio Attorney General, in getting Parsley's 2003 rape and attempted sodomy convictions overturned on appeal.

The Center for Moral Clarity[edit]

Parsley is also founded the Center for Moral Clarity, an organization that relies upon a crystal ball and Parsley's admitted reliance on angel dust (which he believes to actually derive somehow from angels) to see into the future. Under guidelines established by the Center of Moral Clarity the following edicts for Christians have been issued:

You're known by the company you keep[edit]

Rod Parsley has allied himself with numerous people of singular repute: