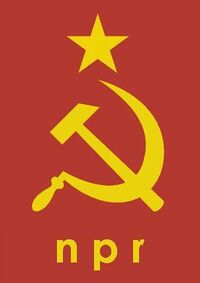 National Public Radio is, along with Public Television, an active part of the vast left-wing conspiracy whose goal is national indoctrination of our youth with its liberal propaganda and use of college words (see Liberal media conspiracy). Despite the valiant efforts of the warriors of AM Talk Radio and Fox News, public radio has enslaved the minds of the elderly, Volvo drivers, Baby Boomers who remember free love and space cake, and insomniacs nationwide. Its liberal agenda pushes beliefs down our throats, such as that civil/equal rights are deserved by: niggers and other inferior races; faggots and other sexual deviants; feminazis and other women who think they have a place outside the kitchen; hippies who don't wash and spread disease throughout the population; immigrants who don't speak English; Godless Communists; the infirm; and Jews. The fact that many public radio hosts are Jewish is proof that National Public Radio is also in league with the Jewish Media Takeover Conspiracy.

It's also notable to mention that all public radio stations run on solar and/or wind power, in defiance of national energy policy.

National Public Radio is funded by our hard-earned tax dollars, which it spends frivolously on things like StoryCorps and The Writer's Almanac. Many public radio stations are off the air at night, meaning that they take our money to pay for white noise. They also play classical music, which is a known cause of aging. Despite these egregious misuses of valuable government funds, there is still no Congressional oversight. This may be because Communists and hippies have infiltrated our government. Public radio also gets funding from various, nefarious, and mysterious sketchy underground cults, many of whom are not known by the general public. These include:

This is only a partial list. Often, this is not enough money to cover the lavish lifestyles and decadent spending of public radio people. Their propaganda is littered with "Pledge Drives" to part hard-working, family-oriented, patriotic Americans from their money. This often involves people threatening to stab themselves or swear that innocent Sudanese babies will writhe in agony if people don't donate. See NPR.

Listeners of public radio can be told apart from average (real) Americans by their know-it-all attitudes, their inability to think mainstream thoughts, their tolerance of others no matter how deviant, and an awareness of the world outside the borders of the US, which is quite simply the most useless knowledge anyone could ever have. They wear organic pashmina sweaters, eat granola and yoghurt, meditate, and can often be found playing Sudoku or chess. (An NPR fundraiser totebag is also a dead giveaway.) They have an exceptional tolerance for long, droning monotones about life in a small town in Minnesota; laugh at two unwashed Italians who snort a lot; are unaffected by an Arab terrorist hag with a slow, raspy voice that drives sanity away; and a love for a short-haired lesbian who interviews gays, blacks, Jews, Communists, liberals, and others in entertainment.

Not all public radio stations play all these shows, but most of them play at least one:

What You Can Do[edit]

Avoid listening to FM radio that doesn't have blaring, brainless pop music. Any talking that isn't directly selling something and keeping capitalism alive is probably liberal. Burn all folk music cassettes and classical records in the house, as they may tempt you to sin. Any "news" that isn't glorifying our President and future King is definitely liberal. These sneaky granola-crunchers will do anything to get you hooked. They're like drug dealers, dealing in treason and dolphin-safe tuna, all in order to get your money. Once you've been grabbed by their omnipresent tentacles, you can never escape. Much like those American Lung Cancer or Easter Seals stickers-- they just don't leave you alone.

The only known cure for those already hooked on public radio is long hours of AM talk radio, or reading a book by Ann Coulter or Bill O'Reilly.

The Recording Industry Association of America, in cooperation with the Federal Government, has pre-approved stations for your listening enjoyment and for the health of your family. They play pre-approved, pro values artists. When you hear a song on one of their stations, you can rest assured that your family is safe from the godless nihilistic black hole that is NPR. Wholesome, clean living artists like Britney Spears, Creed, and R. Kelly are featured, along with important news about celebrities, local violent crime, and important messages from sponsors such as Ovaltine, Evitra Weight Loss Programs, the Midwest Center, local car dealerships, and Male Entertainment Venues.