~ Terry on pretending not to be Irish (or is it Welsh? No-one really knows.) 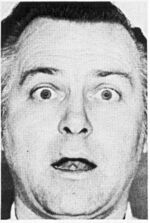 His Majesty Sir Michael Terence 'The Twat' Percival Wogan, Sir Terry of Woganshire or simply The Woganator was born in 1910 in the Mauve Drawing Room of the Earl of Leicester's country mansion, but claims to be Irish in order to further his broadcasting career. He was educated in a secret monastery, where he learned the art of Extreme Sarcasm. He is married, with three children, and is known to his legions of fans by his pet name, "Tosser". He is a sexual deviant of the most foul and derranged kind, often seen with a child cohort in the back of his car, The Wogan Wagon. He is the subject of many of the Anti-Wogan protests performed by mothers and gays. He is also an LA drugs baron and crack lord, referred to only as Tezza by his South-Central homies. He often asks them, "Wogwan?"

The Origins of Terry Wogan[edit]

There has always been much speculation over the whereabouts of Wogan's birthplace, but recent Etymology studies placed it in between a rock and a hard place, and Bruce Springsteen's vagina. While he was perfectly amenable as a child, Wogan ascended to immortality with his part in the rape of Lucrete and the murder of princess Diana, who he is believed to have had intercourse with.

As a world renowned archaeologist and pulminary surgeon, Wogan has dedicated much of his life to the eradication of the Jew and their evil ways. He is believed to have been in league with Adolf Hitler and Mahatma Gandhi during their attempt at seizing power and establishing a facist regime with which they intended to govern all of Earth and to fight Megatron and the Decepticons using only a monkey and a poorly knitted tea-cosy.

While much of Terry Wogan's feats have now passed into folklore, some of his exploits into the vast, dense jungles of middle England are widely known. It is also common knowledge that he has wrestled at least 250 bears in his time, although this has yet to be proven. During 9/11, several witness reports place him at the top of the twin towers, attempting to tightrope between them. However it was later reported that he had fallen, and, despite surviving, had lost all sense of credibility and self-worth. It was because of this that Terry Wogan went into radio. Thus the onslaught had begun.

After escaping from his cruel monastic and sadistic educators, he spent five years raising eagles from ordinary hens' eggs, until he discovered that there was no such career. He then became a radio newsreader, a position he occupied for several years, until the volume of complaints about his off-colour remarks on sensitive news stories became overwhelming. He was offered the choice of exile in Western Antarctica, or presenting the Eurovision Song Contest. He chose the latter, after several false starts. More recently he has been seen skinning ferrets at a roadside cafe just outside Wrexham. Most believe this is a precursor to a finale act in the twilight of his career covering small animal stuffing and sex.

Bear Bating and the fight against Aids=[edit]

Wogan released his first published book in 1990 entitled Bear Bating and the Fight against Aids. Oddly the book was not about either Bear Bating or the medical condition Aids. The book was a semi autobiographical novel about that night Michael Barrymore seduced and inflated Chris Akabusi. Sadly the book was only used in Lithuania as a couster. Many who read it were said to have quoted teh books famous catch line- ' Suck me tetas here comes Barrymore!' 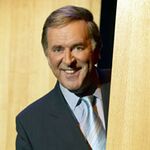 Watch out kids! He's out to rape you!

Wogan was crowned Supreme Ultra-King of the Eurovision Song Contest in 1980, a position formerly occupied by such luminaries as Socrates, Oscar Wilde, and an escaped manatee. He reigns over the contest to this day, dispensing swift and terrible justice with his Iron Sceptre of Irony.

He was later given his own chat show on prime-time BBC One. The show, simply called Woogan, was described by the New York Times as "a magnificent tour de force", and by a drunken hobo as "shite". The show was eventually cancelled, largely due to Wogan's insistence upon interviewing only fictional characters and himself.

In 2008, Wogan was given his own show on Channel 4 (mainly out of sympathy) called Wogan's Total Recall. The premise of the show involves contestants desperately trying to remind Wogan who he is, where he is, and so on. This aspect of the show is particularly challenging because as time progresses Wogan loses all rational thought and motor functions due to age, extreme egotism and Parkinson's disease (a biologically engineered virus created by long-time rival and parallel-universe persona Michael Parkinson). If the contestants fail the task, the studio is sealed and Wogan embarks on a bloody rampage reminiscent of Arnold Schwarzenegger's biopic, Total Recall. In the first few days of airing, Channel 4 received a record 57,000 complaints (36,000 racially related as usual) about the show's violent nature, compared to the timeslot's previous occupants, Richard & Judy. In response, a Channel 4 spokesman said while eating a ham sandwich from a second floor window, "Well, anything's better than looking at that rough bird Judy every fucking day. Besides which, it's not really TV unless someone gets tortured or killed in some form, is it? I'm pretty sure it's in our mission statement, love."

In 1992, a poll revealed Wogan to be simultaneously the most and the least popular person in Britain. This was so confusing that he instinctively reverted to his larval form, i.e. a radio presenter.

Controversies continue - he still faces a case brought by 5 million people claiming Delayed Action Boredom in which apparently harmless tv and radio presenters later cause symptoms of listlessness and inactivity leading to wearing of woolly jumps and in the later stages even Death by Boredom - there is an argument over where he should be tried for Bore Crimes.

In Freddie Mercury and Queen's Birthday Honours of 2005, Wogan was made an honorary Knight of the Order of the Son of the Revenge of the Ottoman Empire. In the Drunken Hobo's Tuesday Honours, he was named a "twat".

Wogan was awarded on honorary doctorate from the School of Hard Knocks in early 2006. The qualification, he said, is a welcome complement to his honorary undergraduate degree from the University of Moderate Pummelling, and his honorary school-leaver's diploma from the Technical College of Mild Discomfort.

Wogan in art and popular culture[edit] 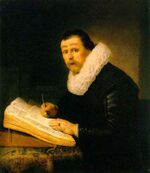 Wogan has attained something of an iconic status in popular culture, featuring as a major or minor character in countless books, movies and TV shows, as well as having many songs written about him. Examples include the 1967 pop song Wogan, Oh Wogan (Where Did You Go-gan?), the movie Wogan's Heroes, and of course the best-selling Planet Wogan science fiction series, notable for being the only major series of novels set entirely in and on the body of a radio personality.

In 2002, Peter Morgan's play Wogan/Best opened at the Riverside Studios in London. The play starred Michael Sheen as Terry Wogan and Colin Farrell's cousin Barry as footballer George Best. The play went on to become a film adaptation, directed by the Olsen Twins, with the role of Best played by Brian Blessed.

Wogan's career has been permanantly dogged by controversy. Indeed for his sins he must have a 10 ton weight attached to his appendix.

1992 Eurovision Song Contest and the diplomatic storm with Croatia[edit]

In Croatia's first appearance in the Eurovision Song Contest as an independent nation, Wogan uttered the infamous line, "Who the feckin' hell are they? Comrade Tito must be turning in his grave at the sight of this pretend pseudo-nation ever got to represent itself in Eurovision!" If that wasn't enough to enrage militant separatists, he later went on to comment at the end of their song, "Quite frankly pathetic that even got on to the stage. It'd be like if, I dunno, Shropshire got on to the Eurovision. And I guess that's a very good comparison as they both like to indulge in a bit of wild bison fucking."

This farcical display led to a diplomatic stand off between the BBC and the newly formed Croatian government which was only resolved after the Croatians threatened to carpet bomb Wogan's home town Limerick. Wogan was taken hostage by a crack band of offended ultra-nationalist Croatian grandmothers and was said to be at breaking point when they denied him the 13 Ginster Cornish Pasties he'd been accustomed to everyday. As things seemed to have reached an impasse, the BBC were swayed by a mass demonstration by the people of Limerick demanding the destruction of the shithole and both parties were satisfied, especially as Wogan was the only person left in the town when it was bombed.

Wogan then posthumously got awarded the highest honour possible in Serbia for his services to the fuelling of petty Balkan nationalist fervour, stoking the fires of hatred between breakaway nations from the former Yugoslavia and of course pissing off those inbred Croats.

Upon hearing Terry Wogan's "hit" single the 'Floral Dance', Charles Manson was said to have interpreted it as a warning of an approaching race war. He saw Wogan and his breakfast radio team as the Four Angels of the Apocalypse mentioned in the New Testament book of Revelation and believed his song were telling him and his followers to prepare themselves ("Dancing here, Prancing there, Jigging, Jogging, Everywhere!"). Manson referred to this future war as "Floral Dance". The words "Floral Dance" [sic] were also written in blood at the scene of one of the murders committed by the Manson Family.

In January 2016 Terry Wogan officially died. His ashes will be scattered over the audience at the next Eurovision Song Contest as a memorial and a giggle.