William Daniel Cunningham (or Billy or Willy; born December 11, 1947) is an American talk radio host, conservative commentator, and Cincinnati lawyer. His nationally syndicated Sunday night talk show has more affiliates than any other show, by virtue of electing the coveted spot from 10:00 p.m. to 1:00 a.m. on Monday, and despite being targeted directly at the segment of the population that, right about then, is overwhelmingly trying to begin a good night's sleep in preparation for work later that morning.

Cunningham has won the National Association of Broadcasters Marconi Award — not once — but twice, as the Dear Reader will discover if he becomes the dear listener, every Sunday at about 10:07 p.m. However, he has also been named "one of the most prolific purveyors of hate speech" by none other than Wikipedia, and they should know.

Cunningham was born in Covington, Kentucky. Later in life, in response to carpetbaggers trying to loot the Queen City and move on, he would claim, "Cincinnati is the first air I breathed, the first milk I drank." This is because his mother walked across the Roebling Bridge every day, absurdly thinking there were safer places to breastfeed on the North side.

He grew up in Deer Park, Ohio, and was the top scorer among all Cincinnati-area basketball players, retaining the ability to "dunk" on problematic left-wing callers. He is married to his high-school sweetheart, who is an Ohio appeals judge, in the rare case he misses the dunk.

He describes his father as an abusive alcoholic who left the family when Cunningham was 11, and whom Cunningham shunned for decades afterward. He uses his father as an anecdote in his programs, for example, urging his listeners to reconcile with estranged relatives before they die, as the alternative is much more difficult.

Cunningham earned a law degree from the University of Toledo, Ohio in 1975 (Who knew it had a law school?) and was promptly admitted to the bar (and everyone knew Toledo had many of them). He was Ohio Assistant Attorney General from 1978 to 1986, enabling him to claim "I know a little something about government, thank you." He is now in private practice, helping many suspects who were not only admitted to a bar but evidently stayed well past closing time. 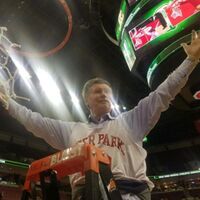 Cunningham has a better rapport with the city's basketball teams, and is never bumped to make way for their broadcasts.

As well as his award-winning — not once — but twice — national program, Cunningham has since 1983 done a radio program on WLW almost any night the Cincinnati Reds are not playing, as their broadcasts are more gripping radio despite the continual lapses in live action. In the late 1990s, cynical station programmers moved his show to go head-against-swollen-head with industry titan Rush Limbaugh, whose show was aired across the dial at WKRP. This arrangement did not last, however; the show's technical quality was poor because Cunningham always had Limbaugh on in the background.

On-air, Cunningham styles himself "The Great American", just barely avoiding walking on Mark Levin's "The Great One" or Limbaugh's "Talent on Loan from God" (the Latter now having called in the loan). Rather than convey an immense ego, however, Cunningham also calls his guests and callers "a Great American", often leading to awkward doxologies of two grown men praising one another's greatness as though Donald Trump were in the studio.

For those without comedic tastes, the "questionable parody" of this website called Wikipedia have an article very remotely related to Billy Cunningham.

Cunningham's show went on a brief hiatus in 2019 due to a contract dispute with one of his aortic valves. This was remedied by open-heart surgery, which he described in radio's most gory detail ever, weeks before it occurred. He rendered his internist's prediction as fact, much as U.S. Presidents have portrayed disastrous Coronavirus models as fact — or are we back to Climate Change now? At any rate, the cardiac crisis spurred the program's move to the iHeartRadio network.

In addition to radio, Cunningham hosted and co-produced a television talk show from 2011-2016. It aired on WXIX in Cincinnati, then in 2012 was syndicated on CW, sandwiched between the crop reports and the award-winning America's Got Square-Dancing Talent! 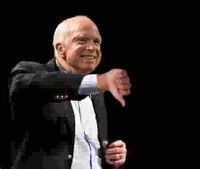 McCain pans Cunningham, with the gesture he would later use on his party's signature legislative effort.

In 2008, Cunningham introduced Republican Party Presidential candidate John McCain (R-AZ), in passing delivering harsh, caustic remarks regarding McCain's Democratic Party competitor — to-wit: giving his full name (Barack Hussein Obama). The stylistic choice was calculated to enrage, coming a mere 6½ years after jihad struck skyscraper in the notorious September 11 attacks. Who knew that the one most enraged would be McCain himself, who immediately repudiated Cunningham. Cunningham would go on to claim "John McCain threw me under a bus" — years before McCain would throw the rest of his party under one over Obama-care.

Cunningham has also claimed that poor people "lack values, ethics and morals" when everyone knows the reason they are poor is that everyone else takes one look at them, sniffs the lack of an American Express card in their wallet (though perhaps sensing other aromas as well), and commences to hate on them.

Cunningham has been doing talk radio, like, forever, and has frequently discussed his retirement, setting out several firm parameters: