For those without comedic tastes, the self-proclaimed experts at Wikipedia have an article very remotely related to Garrison Keillor.

Garrison Keebler or simply GK is a commonly available sleeping aid, derived from N-pr-odiazepine, and marketed under brand names Lakewobegonium®, Prairiehomecompanium® and Writersalmanacium®. 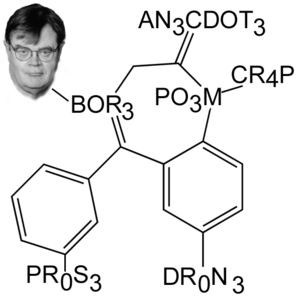 The structure of Garrison Keillor (GK), progenitor of the term "A great face for radio".

After making cookies this is what he does. A highly effective sedative, the effects of GK were first observed in the early 1960s in small test runs at the University of Minnesota, until alcoholic beverage industry lobbyists successfully had it re-classified as a controlled substance. They were able to establish GK's damaging effects to campus social life, including spontaneous loss of consciousness, premature bedtimes, increased hours of sleep, and dangerously low blood-alcohol levels in co-eds.

GK was also implicated as the cause of recurring bouts of poetry which plagued the campus during that decade, though it was later deemed impossible to determine how many were infected by GK compared to other homegrown substances that were circulating concurrently.

Over the years, psychiatrists, radio program directors, and military strategists have discovered many new off-label uses for GK, including:

GK is most commonly dispensed aurally. Recipients describe the sensation after ingestion as one of initial relaxation, followed by increasing confusion and lethargy ("like walking in a fog"). High or prolonged doses are generally not lethal, though they inevitably cause subjects to pass out.

Aurally, GK is rapidly absorbed and has a fast onset of action. Most are subdued within 1-5 minutes, which accounts for the specially-designed dosage of concentrated variants like Writersalmanacium®.

GK is also available in tablet form, though it is quite large and most characterize it as "a tough pill to swallow". In solid form, rectal delivery of GK in suppository form is preferred.

GK has a range of side effects, confirmed through longitudinal studies. The most common ones include:

Like other sedatives, routine users of GK (especially for insomnia) may find themselves with physiological tolerance or psychological dependence. At particularly high risk for GK misuse, abuse, and dependence are:

After prolonged exposure, GK should never be stopped abruptly. The aural dose should instead be lowered gradually, over a period of 2 to 4 weeks, in order to minimize withdrawal symptoms.

Users of Lakewobegonium® or Prairiehomecompanium® should try to cut down usage to bimonthly, then monthly, while using Writersalmanacium® daily, only as needed.

In 2001 Keebler delivered his own eulogy: "My own stories have always put me to sleep. But recently I noticed that my pulse flatlines whether I am listening to my show or not. I guess it's over. It's finished. All the women are strong, as we know, and the men are good looking. And I am a god damned corpse."