For those without comedic tastes, the so-called experts at Wikipedia have an article about Pleistocene Park. 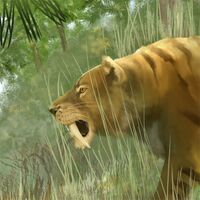 A sabre toothed cat in a scene from Pleistocene Park.

“Pleistocene Park is frightening in the dark”

Pleistocene Park is a 2006 movie directed by Balls Mahoney that stars John Morgan, G.I. Jew and Tia Carrere. When Dr. John Hamm (played by Bob Barker) learns of the discovery of frozen Ice Age/Stone Age mammals, his eyes light up like a kid at Christmas. He realizes that he can make millions of dollars by cloning these animals and opening up a zoo. The deposit includes intact remains of woolly mammoths and saber-toothed tigers. He is also able to obtain DNA of Ice Age mammals from the Le Brea Tar Pits in California.

The story opens with Dr. Alan Grant (Morgan) and his fellow scientist and favourite fuck friend Ellie (Carrere), recovering a mammoth corpse in Alaska. They are approaced by John Hamm who tells them he's opened up a new zoo and he would like them to check it out. Grant asks what kind of zoo and Hamm replies that its right up his ally. They both agree Alaska sucks anyways and decide to go with Hamm. Hamm has opened his park on Scatterie Island just off the coast of Cape Breton simulating the harsh climate of the Pleistocene that these animals are used to. In addition to Dr. Grant and Ellie there are several other people on the tour including Ian Malcolm (G.I. Jew), Hamm's two grandkids Lex (Elisha Cuthbert) and Tim (Harry Potter), and their lawyer (played by Jim "The Hammer" Shapiro). But things get out of hand when Dennis Nedrey (played by Louie Anderson) bypasses the security system causing all the animals to escape. The sabre toothed tigers quickly escape and proceed to slaughter and consume Mr. Arnold (played by Al Sharpton). The cars are stuck in front of the wooley mammoth pen and then the lawyer has the shits so he runs into the outhouse. The wooley mammoths proceed to escape from their pen and eat the lawyer, including his feces. Dr. Grant proceeds to escape with the kids and G. I. Jew is injured but still alive when the wooley mammoth knocks over the outhouse after eating the lawyer.

Meanwhile back at the visitors centre, Neanderthals raid the building, they get a hold of Ellie and have their way with her. At first she resists but eventually she gets so turned on my the size of their units that she allows them to finish her.

Eventually all the animals are killed by Robert Muldoon (Paul Hogan) and the group is able to escape to Cape Breton. Dr. Grant and Ellie sue John Hamm for mental trauma but decide to drop the suit when Hamm offers Dr. Grant his granddaughter. Alan, Ellie, and Lex then proceed to live happily ever after living togther and having hot threesomes every night.